Children think their fathers are better drivers than their mothers, but say dad drives too fast and is more susceptible to road rage 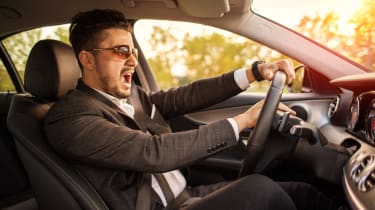 Dads drive faster than mums and exhibit more road rage, but are better drivers on the whole, kids say.

A survey of 1,000 children aged between six and 16-years-old saw 43 per cent say their father was the better driver of their two parents, while just 29 per cent said their mother was better behind the wheel.

However, 42 per cent of children surveyed by MG said their father was the faster driver of the two, and was more likely to exhibit road rage. Furthermore, 35 per cent said they preferred being in the car with their mum because she was more likely to join with games such as ‘I Spy’.

In spite of this, fathers were ranked above mothers for their manoeuvring – including reverse and parallel parking, hill starts and three-point turns – and for abilities such as being able to change a tyre.

Mums have the best taste for in-car music, though, according to 40 per cent of children, while 31 per cent said their dad’s songs were better. Unsurprisingly, 63 per cent said they would rather listen to their own choice of music.

A spokesman for MG commented: “The results paint an interesting picture of family car journeys and how kids see their parents. Everyone remembers family road trips from when they were younger, the discussions which are had, games that are played and music choices.

“It’s amusing to have an insight into children’s views of their parent’s driving habits and clearly the results show dad wins when it comes to driving but mum is more fun to be with in the car.

Check out some of the responses to MG's survey here…