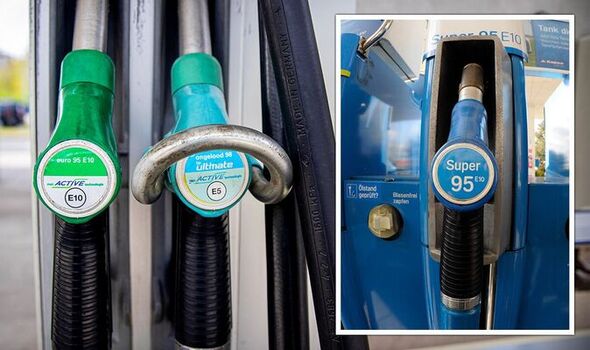 E10 petrol was launched onto forecourts in September 2021 with many drivers reporting problems with the fuel and how it is affecting their car. The Government introduced E10 as a “greener” form of petrol to aid the progression towards reaching net-zero emissions by 2050.

Despite this, many motorists have complained about the fuel saying that the increased volume of ethanol is leading to efficiency problems. One driver on Twitter said: “I have noticed a significant drop in mileage with this new fuel.

“Using more fuel to travel the same distance doesn’t seem very ‘green’ to me. My car is 15 years old, so on the edge of ‘modern’.

“It runs on E10, but the mileage drop is clear. I’ll buy E5 if I can get it, but few garages around here have it. Certainly the supermarket petrol stations are all E10.”

Speaking in agreement, Express.co.uk reader eborman said: “No choice as there is no E5 in four garages I called at.”

When E10 was launched, the Government stated that E5 would still be available at most petrol stations. It said petrol stations that offer two grades of petrol will stock E10 (95 octane) and E5 (97+ octane) petrol.

E5 (97+ octane petrol with no more than five percent renewable ethanol), however, will remain available at filling stations that sell two grades of petrol. Some rural, remote or very small filling stations may sell only either E5 or E10 petrol as standard.

Despite this, many drivers have reported being unable to purchase E5 petrol from many independent or supermarket fuel stations. Express.co.uk reader Just-a-bloke said: “My Saab misfires on E10 petrol.”

This comes as some other drivers have reported issues with their vehicles, from their engine “sputtering” to their fuel efficiency plummeting. Another reader, using the nickname Pythos, said: “I never use E10.

“I own a petrol car. It is designed to burn petrol, not alcohol.” A driver on Twitter wrote: “The Government spends too much time thinking of ways to get rid of polluting cars.

“Which is a joke because they all have to pass an MOT. Did it before with leaded fuel.” The switch to E10 was seen as the biggest change on forecourts in more than two decades when four star petrol was banned. The petrol was taken off forecourts in 2000 with the move bringing the UK into line with a European directive on fuel quality.

Drivers were also previously warned of potential performance issues in the coming months with the continued rollout of E10 petrol.

The RAC warned that there could be as many as 600,000 vehicles on the roads that are not compatible with the fuel.

Despite the decarbonisation benefits, many drivers have previously voiced concerns about the efficiency of the petrol. Dr Dan Clarke, Global Head of Science and Technology, SulNOx Group Plc, warned that motorists in Northern Ireland may notice a significant difference in the driving of the car.

Speaking to Express.co.uk, he added: “While petrol or diesel are very unlikely to freeze in the temperatures we typically experience in the UK, water condensation left in the empty fuel lines can easily freeze and prevent fuel from reaching your engine.

“The introduction of E10 in the UK is likely to have more of an impact on motorists than it has had in other countries which generally have a warmer climate. Preventing this separate watery alcohol phase from forming is the key to removing the problems associated with E10.”

When E10 was originally unveiled by the Government in 2021, it was estimated that the new petrol can “marginally impact fuel economy”.

The Department of Transport said it would generally be around one percent, although it said it would be “almost unnoticeable” to most drivers when making everyday journeys.

Ben Richardson, CEO of SulNOx Group Plc, commented on the impact E10 may have on vehicles in the colder months. He said: “Although the rollout of E10 is a step forward towards decarbonisation, the issues with the alcohol combining with water is effectively like producing vodka in the fuel tank.”

As a general rule, drivers of cars registered prior to 2002 are advised not to use E10 in their vehicle, as problems have been reported.