The European plug-in market is booming on a wave of new generous incentives in several countries.

Plug-in electric car sales in Europe surge. We saw two weak months (April and May) due to the COVID-19 related lockdown, but then June was an all-time record and July was even better.

Last month, sales amounted to about 113,659, which is 213% more than a year ago and the second all-time record in a row. The growth rate is the highest in several years.

It’s clearly a result of incentives and requirements to lower the average emission in the European Union.

The most popular models

Meanwhile, the Ford Kuga PHEV (Ford Escape PHEV in the U.S.) turned out to be the second most popular plug-in in July with 6,366 sales! It’s now #9 YTD.

In the top five for the year, Audi e-tron is doing great (3,110 sales in July and 16,643) and is expected to pass Mitsubishi Outlander PHEV in August – the difference was less than 40 units. 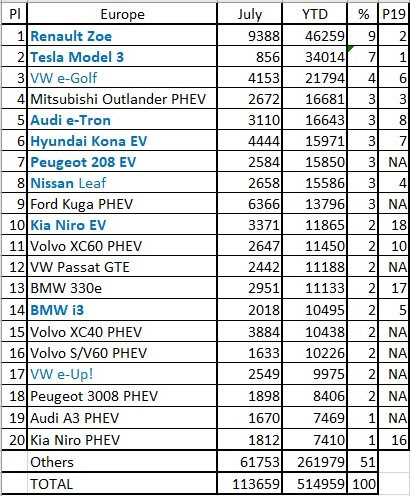