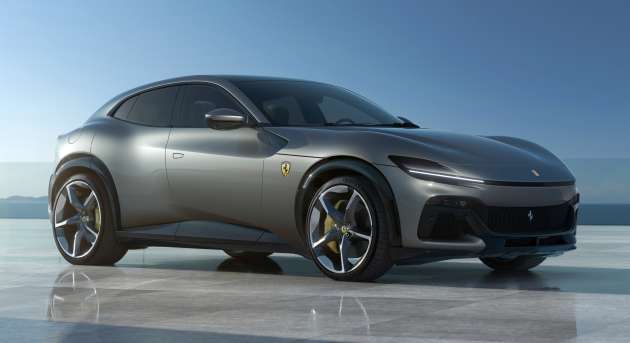 Four years after it was first announced, Ferrari has finally taken the wraps off its Purosangue, the SUV making its official debut moments ago at a launch event in Pisa. The car marks a historic moment for the brand as it ventures into a body-style segment it has never had market representation in before.

Technically, it’s not the company’s first ever four-door four-seater model, because there was the Ferrari Pinin Concept from way back in 1980, but it is the first to see light of day as a series production model.

Measuring in at 4,973 mm long, 2,028 mm wide and 1,589 mm tall, with a 3,018 mm-long wheelbase, the shape of the Purosangue bears more than a passing resemblance to the GTC4 Lusso from certain angles, albeit with heightened and amped up proportions. 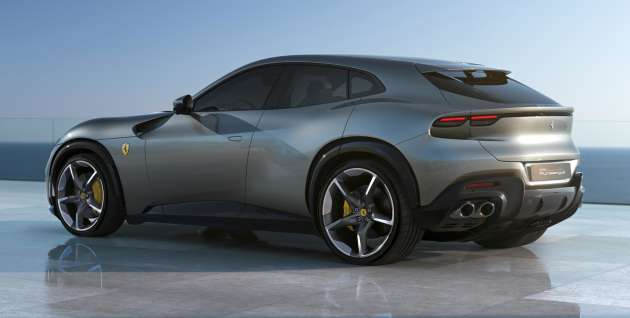 The front borrows some design cues from the SF90, but there are a lot of new, cleverly thought out styling points. For one, the Purosangue doesn’t have a front grille – this has been replaced by a dihedral suspended on the lower section. Two shells create a suspended disc form with a slot that houses the camera and parking sensors, so that they are integrated seamlessly into the car’s shape.

At each side of the bonnet are the DLRs which are set between two pairs of air intakes which meld into the upper part of the flanks, underscoring the styling theme. Other new solutions include synergy between the front bumper and wheelarch trim which generates an air curtain that aerodynamically seals the front wheels, preventing turbulent transverse air flows being generated.

The car looks much sharper in real-life than the photos here suggest, as viewed in the metal at a special closed-door media preview session at the company’s Centro Stile facility in Maranello last week. However, with photography not permitted, we’ll all have to make do with the assortment of photos for now. 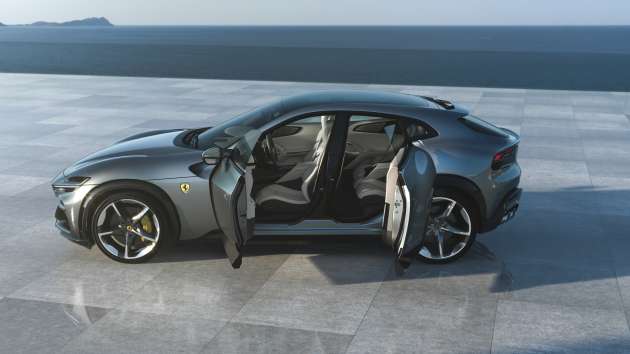 The Purosangue sits on an all-new chassis – designed from scratch, the aim was to come up with a platform offering uncompromising rigidity. The lower part of the structure is made entirely from high-strength aluminium alloy, while the bodyshell is made from materials ranging from aluminium to carbon-fibre, with the introduction of high-strength steel in important areas.

The combination makes for a spaceframe chassis comprised of closed-section extrusions connected by castings, into which load-bearing aluminium sheet metal elements are integrated. The result is a chassis that is stiffer (+30% torsional rigidity and +25% beam stiffness) and lighter than the company’s previous four-seaters’, despite being larger.

The single-shell carbon-fibre roof with integrated soundproofing is also completely new, and delivers rigidity levels on a par with a glass roof, while weighing 20% less than an aluminium roof with soundproofing. 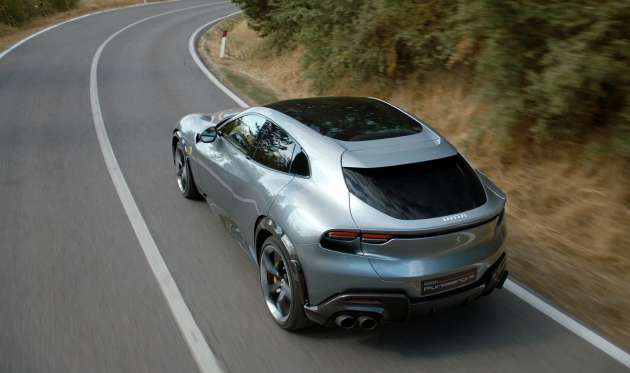 As for access into the cabin, the focus was on offering as much ingress space as possible whilst still keeping the wheelbase compact. To achieve this, the Purosangue utilises a rear-hinged back door in its design – going with a traditional front-opening layout would have meant increasing the wheelbase.

The electrically-operated unit features a 79-degree opening, while the front doors have a 63-degree opening, which is five degrees wider than on other Ferrari models. Despite the pillar, ingress to the rear of the cabin is quite easily accomplished without fuss, as tried on the display car at the media preview.

The rear space has decent enough room in terms of headspace, and there’s enough knee-room to not make it feel pinched, but of course, it remains to be seen how things will hold up during extended travel. Incidentally, you might wonder why the B-pillar has been retained – according to chief commercial marketing officer Enrico Galliera, going without it was also explored, but in the end structural stiffness meant that it had to remain. 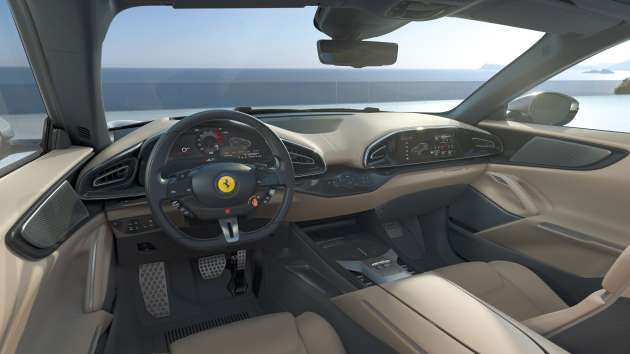 Elsewhere, opening panels include a front-hinged bonnet, which references the Monza SP1/SP2 and other Ferraris from the past (including the Pinin Concept), and an aluminium rear hatch that is electrically activated – two electric Stabilus tailgate lifters allow the unit to be opened to 73 degrees for easy access to the boot and provide easy loading and unloading of luggage. The boot is the largest ever seen on a Ferrari and the rear seats can be folded to increase the luggage space.

Despite long-standing rumours of a number of powertrain possibilities, including, among others, the 4.0 litre twin-turbo V8 plug-in hybrid setup from the SF90 and the 2.9 litre V6 hybrid system from the 296 GTB, the Purosangue arrives on the scene with only one engine choice, and that’s a naturally-aspirated petrol V12. The carmaker had previously said that the 812 Competizione would be its last non-hybrid V12-powered model, but as it turns out, this isn’t quite the case.

The 6.5 litre mill, known as the F140IA, maintains the architecture seen in the company’s recent 12-cylinder units, including a 65° angle between its cylinder banks, dry sump and high-pressure direct injection. While the cylinder heads are derived from the 812 Competizione, the intake, timing and exhaust systems have been completely redesigned.

The company says that much attention was lavished on improving mechanical and combustion efficiency, employing Formula 1-inspired calibration concepts, and on producing the highest amount of torque at low revs possible, with 80% of the maximum torque available from 2,100 rpm, peaking at 716 Nm at 6,250 rpm.

The engine is mid-front-mounted, with the partnering eight-speed oil-bath dual-clutch transmission housed at the rear to create a sporty transaxle layout. The Power Transfer Unit (PTU) is coupled in front of the engine to provide a unique 4×4 transmission, and the layout presents the car with a 49:51% weight distribution.

The eight-speeder’s ratios are the same as on the SF90 Stradale and 296 GTB. With larger tyres, this solution gives ratios that are shorter than on previous Ferrari four-seaters to the benefit of more progressive performance under acceleration. The eighth gear is designed for a more relaxed experience in long-distance driving.

The Purosangue also gets the very latest iterations of the vehicle dynamic control systems seen on its sports cars, including independent four-wheel steering and ABS ‘evo’ with the 6-way Chassis Dynamic Sensor (6w-CDS). Making its world debut on the Purosangue is the new Ferrari active suspension system. This very effectively controls body roll in corners as well as the tyre contact patch over high-frequency bumps to, as the company puts it, deliver the same performance and handling response as its sports cars. 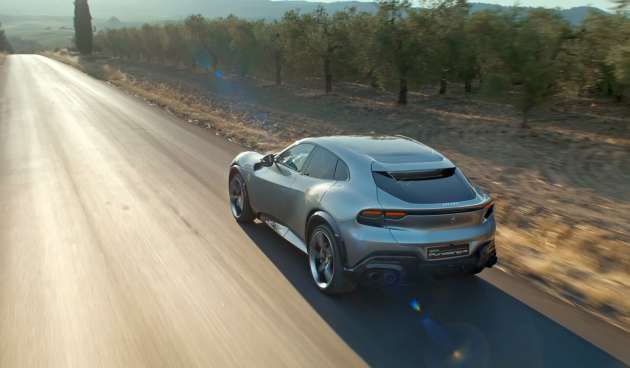 The driver’s cockpit is inspired by the SF90 Stradale and is almost exactly mirrored on the passenger side. This creates an unparalleled feeling of emotional engagement for the front passenger, aided and abetted by a 10.2” display that provides all the information required to help them participate in the driving experience. The Purosangue features the entirely digital interface already adopted for the rest of the range.

Standard equipment includes a Burmester audio system, while a host of optional extras, including brand-new Alcantara upholstery, are available on the available kit list. As for prices, that for the Purosangue starts from 390,000 euros in Italy, before options. Production is set to begin this year, but first deliveries of left-hand drive examples will only start from the second quarter of next year.