Truck tailgates have become an integral part of the ownership experience. They’re no longer simple slabs of sheet metal that open and close. Automakers have added a host of functions to tailgates over the last few years, making it easier to use. GMC introduced the MiltiPro tailgate on the Sierra 1500, and Ram debuted its interpretation with its barn-door-style MultiFunction one. Ford could be looking to outdo both if the company’s latest patent ever enters production.

The filing with the US Patent and Trademark Office, which was filed back in July 2020 but only recently published on January 6, 2022, shows a trisected F-150 tailgate that features a central lowering portion flanked by stationary pieces. It’s similar to the Ram’s trick tailgate, except Ford’s design provides a more central position to access the entire truck bed. Ford did file a trademark for something called the Flexbed, which could be the name of the new tailgate. 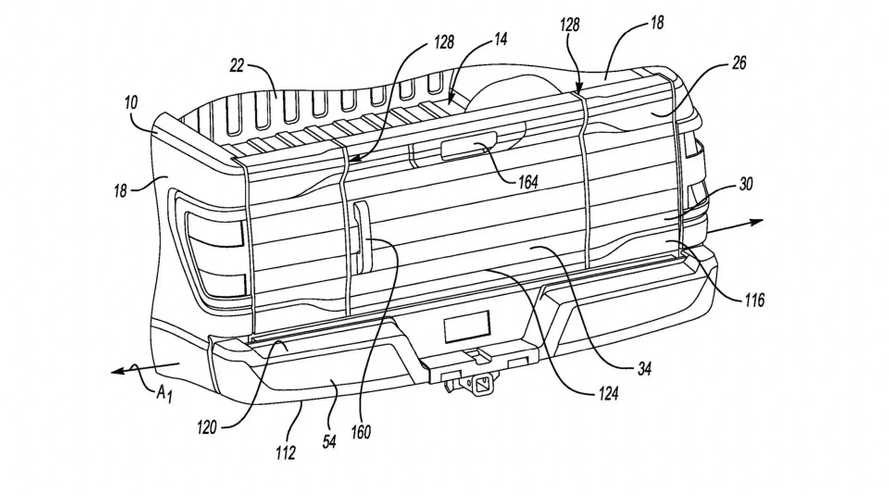 The new design doesn’t dismantle the F-150’s tailgate step that it already offers and handle and step that makes it easier to climb into the truck bed. This new design retains that option, and the patent filing shows Ford is adding another. This one folds out from the bumper step and can be used when the tailgate is closed, making it a bit easier to reach over the tall bedsides. The patent also shows the tailgate in both configurations can be operated electronically.

When Ford updated the F-150 for the 2021 model year, it didn’t arrive with a fancy tailgate. Instead, Ford opted to make the tailgate a functional workspace called the Tailgate Work Surface, which can handle C-clamps without damaging the truck body. It’s unclear from the patent how this could affect the work surface, but Ford figured out a way to keep the tailgate step integrated into the design, so maybe Ford will be able to offer both. There were reports in 2020 that Ford was working on designing a new multifunction tailgate, and there were spy photos, too.

Source: US Patent and Trademark Office via CarBuzz.com