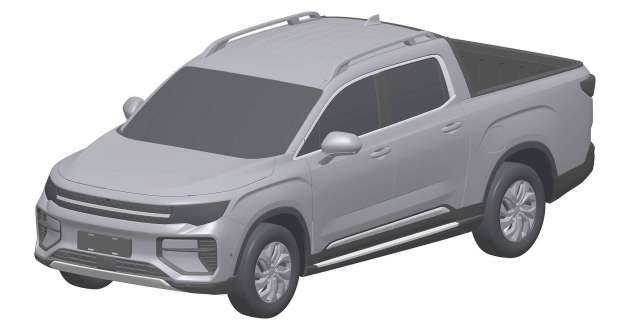 Patent images of Geely’s first electric pick-up truck have surface online, although the upcoming model will reportedly not be sold under said brand. Instead, NetEase Auto reports that the unnamed EV will be placed under Radar, which is Geely’s pick-up truck division spun off from its commercial vehicle division in November last year.

The report also pointed out that Shandong Geely New Energy Commercial Vehicle will focus on R&D, production and sales of electric pick-up trucks catering to the mid- and high-end segments, likely including the Radar model you see here. For this, Geely said to invest 2.42 billion yuan (around RM1.56 billion) to establish a manufacturing facility in Shandong Province.

It should be noted that Geely already has a pick-up truck in the form of the Farizon FX, which is based on the Boyue Pro. Farizon (the English name for Yuan Cheng) is a brand of Geely Commercial Vehicles, which is the commercial vehicle division of the Chinese automaker. 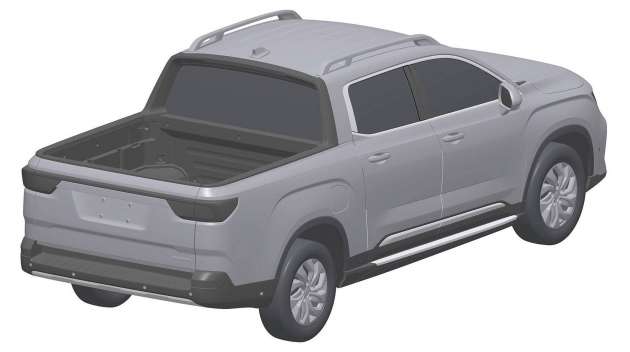 The vehicle you see in these patent images looks more “normal” compared to the FX and isn’t as aggressive in its design compared to other pick-up trucks. Notable cues include headlamps that are linked by a closed-off grille at the front, joined by large faux inlets at the corners of the bumper that flank the lower intake and what appears to sensors for the driver assistance systems.

Down the sides, we find recessed creases on the wheel arches, with those at the rear integrating the charge port doors. As for the rear, we find two-piece taillights laid out horizontally with a light bar linking them, joined by a blacked-out step portion of the bumper.

Based on the images, the truck bed doesn’t appear to be very roomy, suggesting the Radar pick-up truck will be of a unibody construction instead of using ladder frame. Chinese reports suggest that the Haoyue, which is larger than Boyue Pro, will be the basis for the Radar model – the shut lines and creases do appear to be very similar.

Geely’s commitment to electrification has seen the introduction of the Sustainable Experience Architecture (SEA), which it said will underpin a wide range of new, unibody electric models, including commercial vehicles that use the SEA-C version of the platform.

Whether or not the mystery Radar model will be the first to showcase it remains to be seen. Geely’s first EV pick-up truck will reportedly make its debut this year, with a reveal said to take place as soon as tomorrow (May 13, 2022), so stay tuned.