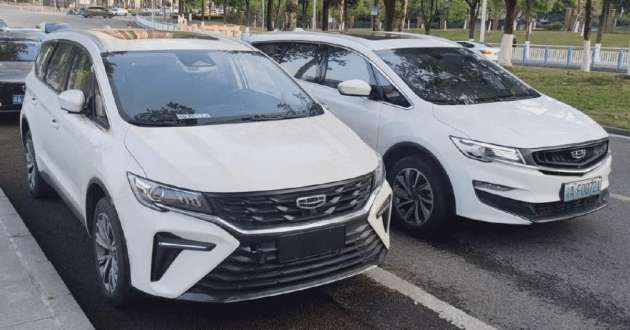 The Geely Jiaji (codenamed VF11) was launched in China back in March 2019 and will soon be given a facelift, according to a report by CarNewsChina. The three-row MPV, as reportedly previously, is one of a few Geely vehicles that Proton has secured the use of intellectual properties (IP) and the rights to manufacture for and is widely rumoured to be a replacement for the Exora.

Spyshots of the refreshed MPV sighted by the publication show a heavily revised front fascia, which now adopts Geely’s Vision Starburst design philosophy. The result is an X-shaped face that bears some likeness to Lexus’s spindle grille, while the “expanding cosmos” grille has been swapped out for a reshaped one bearing the “Infinite Weave” pattern. Designed by Proton, the grille is also seen on the X70, X50, Persona, Iriz and Saga.

Other exterior changes are found at the rear, where the two-piece taillights have been reshaped to feature a slight notch on the fenders. The clusters are also linked by what looks like a light bar, which is currently in vogue, with the Geely script now placed directly on the reprofiled tailgate. Further down, the reflectors have been rotated to be vertical and placed at the corners of the bumper, accompanied by a new chrome piece that mimics exhaust outlets.

Inside, the most notable revision is the centre console, which has been simplified and now has most controls placed in a single file and parallel to a covered storage space. This also creates room for a more substantial storage cubby beneath the centre air vents, and the centre armrest no longer opens in two parts.

The current Jiaji is available with a regular petrol powertrain that features a 1.8 litre turbocharged four-cylinder engine making 181 hp and 300 Nm of torque. There’s also a plug-in hybrid system comprising a 1.5 litre turbo three-pot and an electric motor for 255 hp and 385 Nm. It’s uncertain if these offerings will be retained or be replaced as part of the imminent facelift.