There’s a rare chance to get your hands dirty in the newest set of GT Sport Time Trials, which start today.

Over the next 14 days, you’ll be competing against the rest of the world in hot laps at two of the game’s original circuits. Neither is particularly common in the rotations for Sport Mode in general, so you’ll need a little time to refamiliarize yourself.

For the fixed-setting event you’ll also want to brush up on your rally skills. The event takes place at the Sardegna Windmills rally course, one of three dirt tracks that launched with GT Sport back in October 2017. The long and thin circuit takes you around a wind farm setting on the Italian island of Sardinia (or Sardegna, in Italian).

It’s a pretty fast circuit, with long, curving sections on full throttle. That’ll seem even faster in the cars you’ll be using, with free choice of any of the game’s fictional Gr.B rally race cars.

The second event heads to another original circuit, again in Europe. Alsace Village is set in the historically disputed region between France and Germany, in the foothills of Les Vosges. The circuit here is partly a road course, seemingly intending to evoke thoughts of the road sections of tracks like Circuit de la Sarthe.

You’ll be able to use any Gr.3 race car for this time trial, which almost seems like too much machine for a lot of the track’s corners. Fortunately you also have free rein over vehicle settings. Power and weight will remain as they are for normal Gr.3 Balance of Performance.

GT Sport‘s Time Trial mode is a global competition, ranking your best time against all players worldwide, rather than just those in your region as with other Sport Mode events. These two time trials will run through to July 16, when two further events will replace them. 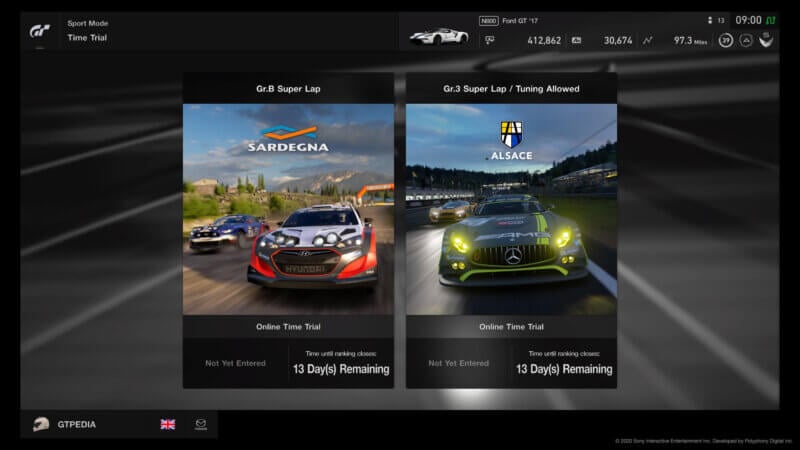