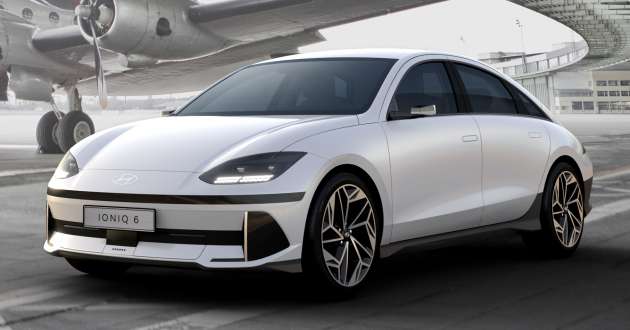 Hyundai has unveiled the Ioniq 6, the latest in the brand’s range of fully electric vehicles and which joins the Ioniq 5 that made its debut last February.

Its slippery aerodynamic traits come from its single-curve silhouette, as well as features such as the low nose, active front air flaps, wheel gap reducers and the optional digital side cameras which take the place of conventional mirrors.

Towards the rear, the decklid spoiler resides above the fastback boot which has its own lip. Beneath, the Ioniq 6 also employs a fully covered undercarriage, along with optimised deflectors and a reduced wheel-to-arch gap for smoother airflow. 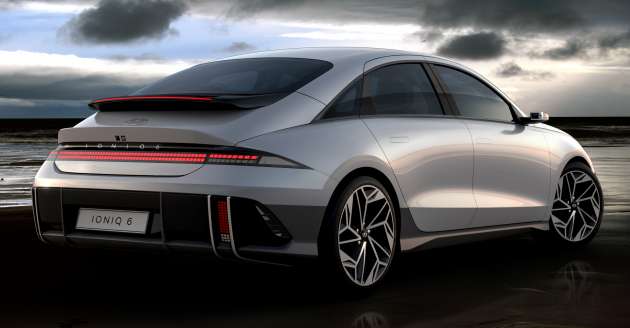 Visual cues that additionally tie the Ioniq 6 to its Ioniq electric vehicles are in the use of more than 700 Parametric Pixels throughout the car, such as in its headlamps, rear combination lamps, front lower sensors, air vent garnishes and centre console. At the rear of its exterior, the Ioniq 6 also gets a Parametric Pixel high-mounted stop lamp that further emphasises its visual identity.

Hyundai employs the Electric Global Modular Platform (E-GMP) for the Ioniq 6, as it has on the Ioniq 5 and which is shared with other models from within the group such as the Kia EV6 and the Genesis GV60.

Technical specifications for the Ioniq 6 are scarce for the time being, though despite its numerical positioning relative to the Ioniq 5, the Ioniq 6 is actually a smaller vehicle. According to Ars Technica, the new, more curvaceous EV has a 50 mm shorter wheelbase than that of the Ioniq 5, which spans 3,000 mm between its axles.

The sharing of the E-GMP platform that is employed for the Ioniq 5 holds the possibility of shared powertrains and battery specifications, which brings single- and dual-motor configurations for rear- and all-wheel-drive. 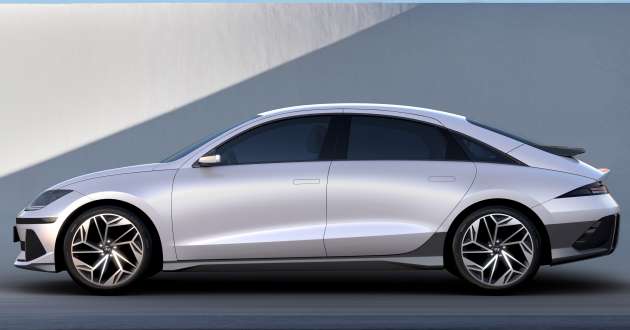 The Ioniq 6 had been originally intended to remain closer to the design of Prophecy concept car, though packaging of the 150 mm-thick main battery beneath the cabin floor meant that final car as seen here could not be as low-slung as the concept.

Hyundai design chief Lee Sangyup had intended to stretch the wheelbase of the final car to try and retain more of the show car’s proportions, though wider consensus within the company that it was to be shorter than the Ioniq 5.

“This was the design and to be honest, it’s what we pushed for at the design centre. but the sales division and marketing decided that 4,485 mm [for the wheelbase of the Ioniq 6] was about the right size,” Lee told Ars Technica. For comparison, the Ioniq 5 measures 4,635 mm long, with the aforementioned 3,000 mm wheelbase.

Hyundai calls the Ioniq 6 cabin a “coccoon-shaped interior” intended as a comfortable hideaway and personal space, and the underfloor location of the vehicle’s battery as part of the E-GMP design enabled the maximising of legroom and overall spaciousness in the cabin, said Hyundai.

Overall illumination in the Ioniq 6 is provided by dual-colour ambient lighting, and users can select from 64 colours and six dual-colour themes that have been developed by colour experts to help create a lighting environment where the car’s driver and passengers feel relaxed and comfortable. The steering wheel features four Interactive Pixel lights in the centre of the steering wheel to facilitate communication between driver and vehicle.

The front door cards have been designed without buttons or controls to provide “more breathing room” and storage space, while transparent accents on the crash pad garnish, door map pocket and lower console section accentuate the cabin’s spaciousness, says Hyundai.

Complementing its zero-exhaust-emissions nature, the Ioniq 6 environmentally friendly materials and processes in its manufacture, such as with recycled pigment paint extracted from end-of-life tyres for cladding, and bamboo charcoal pigment paint for its body.

Inside, the cabin of the Ioniq 6 also gets sustainable materials and colour treatments. Depending of trim level, its seats are made from eco-process leather or recycled PET plastic, while bio TPO skin is used for the dashboard, bio PET fabric for the headliner, vegetable oil-derived bio paint for the doors, and in a first for the Ioniq sub-brand, the use of recycled fishing nets for its carpets.

More details, including the full specifications of the Ioniq 6 will be unveiled next month, says Hyundai, which will further detail the new electric car’s features and technologies.