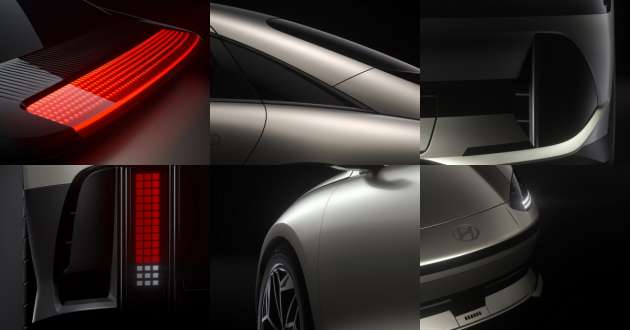 The official debut of the Hyundai Ioniq 6 is just around the corner, and the manufacturer has released a batch of images which tease the upcoming electric vehicle’s exterior in parts before “the full design of the Ioniq 6” is unveiled very soon.

The string half a dozen close-up images of the car begins with a view of what should be the base of the rear screen, where the rear lamp shown appears to be a nearly full-width band on a spoiler-like deck that extends from the base of the screen. The light arrangement within the assembly employs a design which mimics the Parametric Pixel graphic as seen on the Ioniq 5, which will also be found elsewhere on the car.

Moving slightly forward to the close-up of the C-pillar, the Ioniq 6 shows a more curvaceous form that contrasts with the square-edges of its light graphics (and compared to the Ioniq 5), and the more bulbous shapes extend to the door panel and rear fender as shown here.

The next image shows a close-up of the front bumper inlet, which is mostly enclosed by a cover save for a vertical opening that curves to match the bumper’s design. Hyundai says the front end of the exterior is designed to minimise air resistance.

Moving back to the rear end of the vehicle and remaining on the vehicle’s lower section, the Parametric Pixel lighting arrangement is also found at the lower rear corners of the Ioniq 6, and is applied to every Ioniq model, says Hyundai.

The fifth partial image revealed of the Ioniq 6 shows the front portion of the vehicle’s side, which the carmaker says is inspired by “the soft surface of a river stone”, showing curves that inspire the Streamliner moniker.

Finally, the sextet of images concludes with a partial view of the Ioniq 6 front end, which shows a curved front fascia. Here, the electric vehicle’s headlamp assembly is also shown to use LED daytime running lights which are also of the Parametric Pixel design, mirroring those of the tail lamps.

Currently, the upcoming Ioniq 6 is understood to use the E-GMP dedicated EV platform that forms the basis of the Ioniq 5, Kia EV6 and the Genesis GV60, which means it will support DC fast charging at up to 350 kW. The Ioniq 6 is expected to match the charging times of the Kia and the Genesis EVs, which take 18 minutes to go from 5-80% state of charge.

Based on the specification for those vehicles, the upcoming Ioniq 6 will likely mirror its sibling, the Ioniq 5 in terms of powertrains and battery capacities. These are therefore likely to be single- and dual-motor layouts offering RWD and AWD, and the largest battery pack at 77.6 kWh should offer a range of around 482 km.

Not long now, before the exterior form of the Hyundai Ioniq 6 is shown in full. Do you like this combination of curves and squares?