The Hyundai Staria was first launched in Malaysia back in October 2021 and is currently being offered in a sole 2.2D Premium variant priced at RM366,768 on-the-road without insurance. The 2.2D Premium is a seven-seater, but it looks like it will soon be joined by a 10-seat variant, according to these spyshots.

Judging by the photos, the 10-seat version comes with a different kit list when compared to the 2.2D Premium. A look inside the interior reveals a more basic head unit instead of an eight-inch touchscreen, along with simpler air-conditioning controls and a gear lever instead of buttons for the transmission. Leather upholstery and a digital instrument cluster appear to be items carried over.

As for the exterior, the wide-width front grille has a different design that is body-coloured and doesn’t feature a fancy finish or textured trim piece. The headlamps also appear to be halogen-type units instead of LEDs as is standard on the 2.2D Premium.

On the matter of seats, the people mover version of the Staria comes with four rows of seats arranged in a 2-3-2-3 seat layout, with the front row featuring a centre console that folds down. Ceiling air vents are still present, although you won’t find an Alcantara headliner here. 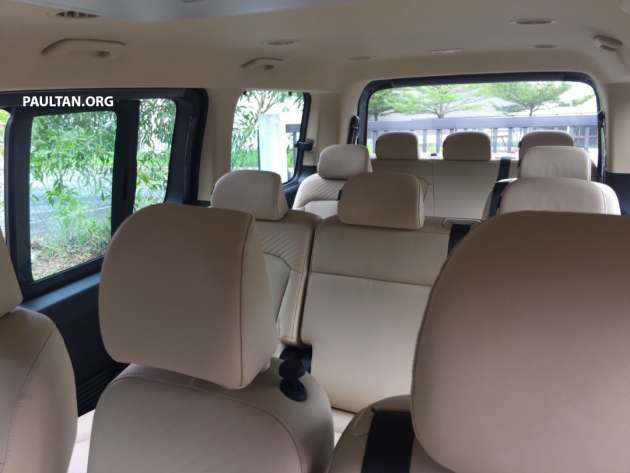 We don’t know what powers the 10-seater, but it will likely get the same 2.2 litre four-cylinder turbodiesel rated at 177 PS and 431 Nm of torque and paired with an eight-speed automatic transmission sending drive to the front wheels.

With a lighter kit list and more seats, this version of the Staria could be aimed at customers who want more seating capacity but don’t necessarily want all the fancy features of the 2.2D Premium. The 10-seat Staria could also be a replacement for the current Grand Starex which is an 11-seater – people mover configurations are popular with businesses such as hotels and tour operators.

The Grand Starex is classified as a commercial vehicle and is still being sold in Executive Plus guise at RM165,888. We’ll have to wait and see when and if Hyundai-Sime Darby Motors (HSDM) introduces a new Staria variant, and more importantly, how much it’ll cost.