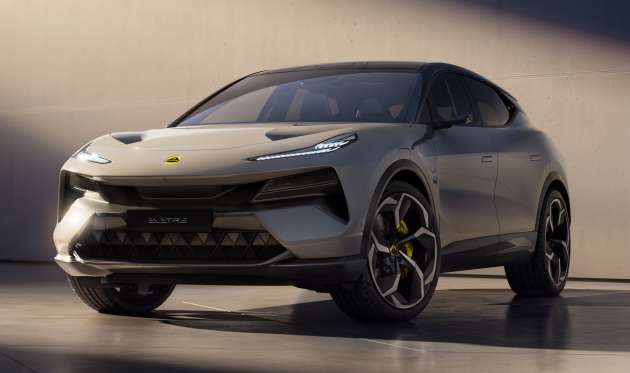 The Eletre’s 800-volt electrical architecture can support up to 350 kW DC fast charging, where getting the battery from 10% to an 80% state of charge takes just 20 minutes. The Eletre is also equipped with an onboard 22 kW AC charger. At full charge, the Eletre can return up to 600 km of range based on the WLTP cycle.

As standard, the Eletre features five different drive modes – Range, Tour, Sport, Off-Road and Individual – and is fitted with active air suspension, torque vectoring, Matrix LED headlights, an active front grille and 22-inch 10-spoke forged wheels. On the topic of wheel sizes, the Eletre rides on 22-inch wheels as standard in the UK, with 20-inch and 23-inch options available. There are five wheel designs and six brake caliper colours available for the car. 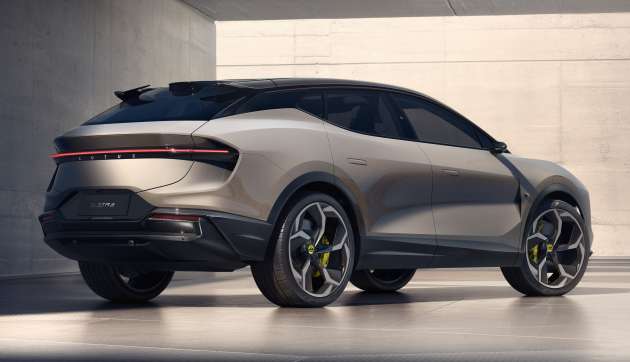 The Eletre S gets additional goodies such as privacy glass, an active rear spoiler, ambient lighting, illuminated side sills, soft-close doors, auto-dimming side mirrors and an air quality system. It comes with a 2,160 watt, 23-speaker KEF Reference Audio system. Lotus has collaborated with Dolby to combine the KEF speaker system with Dolby Atmos technology for an audio experience with increased depth, clarity and precision – the Eletre is the world’s first car to combine Dolby Atmos and KEF’s audio system.

As for the flagship Eletre R, its dual electric motor setup not only provides all-wheel drive capability but also makes it the world’s fastest dual-motor pure electric SUV. The dual electric motors are similarly powered by a 112 kW battery, with 10% to 80% state-of-charge taking just 20 minutes with DC fast charging. The Eletre R produces a whopping 905 hp (675 kW) and 985 Nm, allowing it to go from 0-100 km/h in just 2.95 seconds while 80 to 120 km/h can be done in under 1.9 seconds. Its top speed is rated at 265 km/h. As for specifications, exclusive to the Eletre R are features such as Track Mode, which provides a lowered ride height and more performance-oriented setting for the dampers and anti-roll control.

All three variants come with a five-seat configuration as standard, with a four-seat layout available as part of the optional Executive Seat Pack. Six unique interior designs are available with sustainability at heart. In addition to more durable, odour-free leather, a new man-made fibre – that’s 100% recycled and recyclable – is used in the carpets and boot liner.

Also standard is the deployable LIDAR technology, a world-first in a production car with end-to-end autonomous driving technology. The system can also be updated via OTA updates for more autonomous driving functions in the future. Having tested the car on the Nurburgring circuit, Lotus revealed that work is underway to develop advanced driver aids to allow customers ‘to drive’ on the circuit autonomously.

Still on the topic of driver aid and convenience, Lotus revealed that it is partnering with HERE Technologies to deliver integrated navigation services for the Eletre. This includes EV Routing, EV Range Assistant and Predictive Routing which, like the other functions, can be updated via OTA updates. 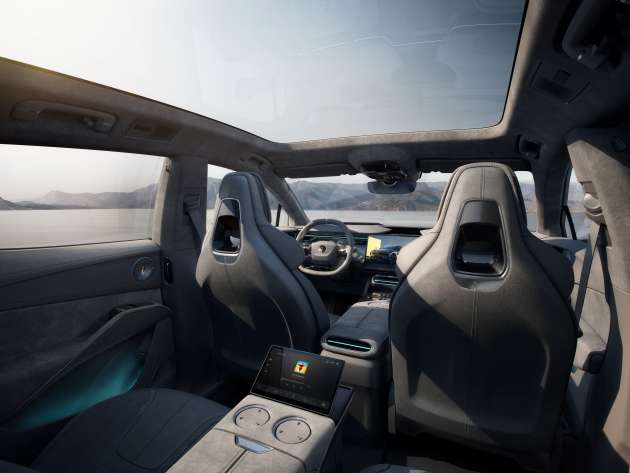 What was not mentioned when the Eletre was revealed in March is that it has a ground clearance of 187 mm (with 20-inch wheels) and 194 mm (with 22/23-inch wheels). Rear boot space is rated at 611 litres for the four-seater layout, while the five-seater offers 688 litres of space. With the rear seats folded in the five-seater configuration, boot space is rated at 1,532 litres.

In the UK, the Lotus Eletre is accompanied by a five-year/160,000 km vehicle warranty. It is expected to make its debut in North America as well as the Middle East, Asia Pacific and other regions beginning 2024.