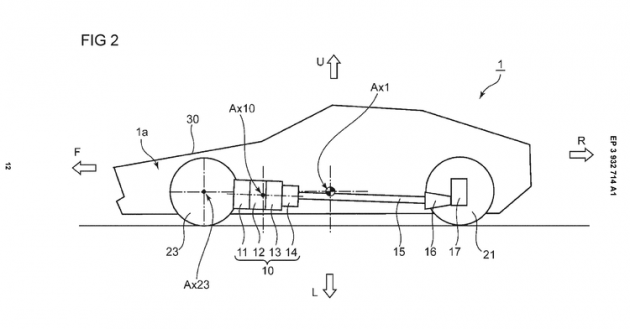 Mazda has previously filed patents for a rear-wheel drive sports car chassis, and even though the natural choice of powertrain would be an inline-six internal combustion engine that has been reported to be in development. The chassis patent drawings, however, show that there is precious little room in the engine bay, which calls into question the engine that will go into the new sports car design.

Now, with the emergence of a newer set of patent drawings sighted by Japanese site Hatena Blog, the illustrations depict an engine with three ports, one in each vertical casing; these are presumed to be for spark plugs, and its layout suggests a three-rotor rotary engine.

According to Hatena Blog, the Hiroshima-based manufacturer has applied for these patents not just in Japan, but also in Europe with the European Patent Office (EPO), which will be for “hybrid vehicles that use a rotary engine for driving,” according to translated text.

The plan-view drawing of the car appears to show that the gearbox will be a transaxle unit, with hybrid electrification to be with a motor mounted just aft of the three-rotor engine, along with what could be the locations of the in-wheel motors on the front axle.

This could be a form of 48-volt mild-hybrid electrification, which Mazda previewed in a presentation in November 2020. An earlier illustration depicting its rear-end assembly seems to lend weight to the presumption, given the arrangement of the structural beams that would make room for a transaxle gearbox.

As before, patent filings are hardly confirmation that a concept will go from technical drawing to showroom, though this would appear to lend more weight to a possible rotary engined sports car. A productionised RX-Vision doesn’t seem too far-fetched now, does it?