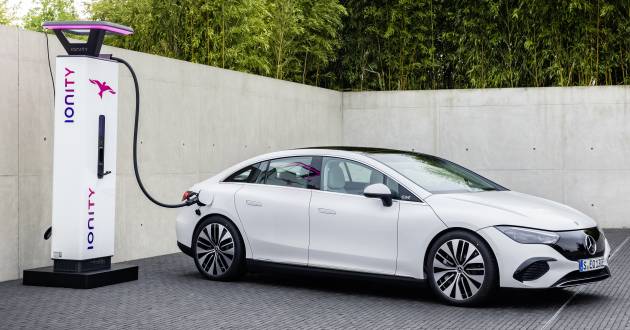 Mercedes-Benz is embarking on a mission to electrify its entire lineup, as it plans to go all-electric by the end of the decade (at least where market conditions permit). It’s an ambitious strategy, but it will all be for nought if it didn’t have any affordable (sorry, less expensive) electric vehicles to sell.

That’s why the new EQE is so important – until an EQC sedan (yes, we know that the moniker is currently used on Stuttgart’s first electric SUV) arrives in 2024, this will likely be the cheapest dedicated Mercedes EV, being smaller than the EQS. Even though there are the even cheaper GLA– and GLB-based EQA and EQB available, the company’s bread and butter is its four-door models, so there’s a lot riding on this car.

This focus on affordability is apparent when you look at the variant Mercedes chose to highlight during today’s reveal. No fancy, super powerful all-wheel-drive model that will get from zero to 100 km/h in no seconds flat – instead, the EQE 350 produces an entirely reasonable 215 kW (292 PS) from a single rear motor and is capable of a perfectly sensible 660 km of range thanks to its 90 kWh battery.

Indeed, the power figure and the “350” badging line up perfectly with the mild hybrid E 350 and plug-in hybrid E 350 e models, both of which were discontinued when the W213 E-Class was facelifted. This makes the EQE 350 an ideal candidate for their replacement, particularly in the context of the local market. 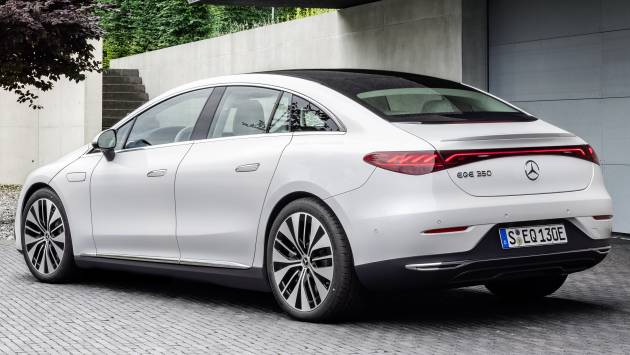 Pricing is the main stumbling block for EVs in Malaysia, but there’s a reasonable chance of the EQE 350 being competitively priced even against conventional petrol-powered models. We only have to look at main rival BMW, whose iX SUV is priced at a shade under RM420,000 – only RM20,000 more than what the E 350 and E 350 e (the latter with GST) used to cost. That’s a marginal difference in premium segment terms.

Of course, the BMW’s price is with a sub-par two-year warranty – it’s just under RM436,000 with a five-year warranty and service package – and the iX xDrive40 also has a smaller 71 kWh battery (providing a range of “only” 425 km). And as we’ve written before, the battery makes up the vast majority of an EV’s cost.

The EQE counters, however, by being less powerful – versus the iX’s 240 kW (326 PS) of all-wheel-drive thrust – and in a cheaper-to-produce sedan body style, which should offset the battery cost. Even if the EQE ends up being slightly more expensive than the iX, it will still be good value, especially as its only other pure electric rival is the Porsche Taycan.

The similarly-sized Zuffenhausen model is priced at RM605,000 (all prices listed here do not include the rebate on the sales and service tax or SST, which expires at the end of the year), and that’s for the base rear-drive variant. That car is just as powerful as the iX (it’s temporarily capable of up to 350 kW or 408 PS under hard acceleration) but its 79.2 kWh battery provides a piffling 431 km of range. 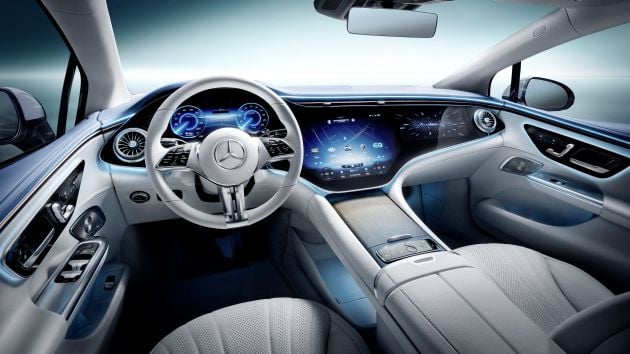 No EV is immune from the issue of range anxiety, but the EQE 350’s decent range of 545 km even in its least efficient form should alleviate the matter somewhat. That’s especially true given that DC fast charging stations are being planned (ironically by rivals BMW and Porsche, although Mercedes will likely have plans of its own) across the country, making interstate journeys a viable affair. Even without these stations, an 11 kW AC charger will juice the battery up in 8.25 hours, which can be easily done overnight.

It seems like with the EQE, you can have your cake and eat it too, so what’s the catch? Well, the car is only going on sale internationally starting in the middle of next year, so you’d be lucky to be able to get one by the end of 2022. By then, there will likely be several electric vehicles on the market, not least of which being the smaller (and almost certainly even cheaper) BMW i4, potentially stealing some vital customers. Whatever happens, the next 12 months will be a very eventful one for the premium EV market in Malaysia.