Just like Formula One, Formula E has a new safety car for the 2021 season, and it too is British. However, a big V8 wouldn’t really fit the image of the series, so the new car is — appropriately — an EV.

It’s called the “MINI Electric Pacesetter inspired by JCW”, and as you might expect it’s a pretty sporty electric car. MINI has based the car on the MINI Electric, but turned everything up to 11 — and while it might not be entirely road legal, it could preview future versions of hot MINI John Cooper Works models. 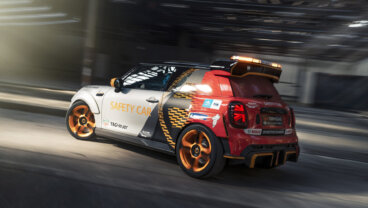 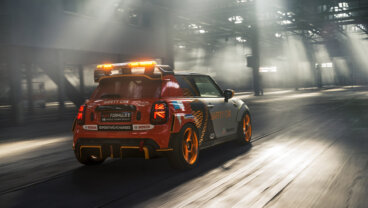 MINI teamed up with BMW Motorsport to design the safety car, which you’ll see leading the field if there’s any major on-track incidents during the Formula E races. There’s new aerodynamic components in all areas, including new wheel arches, new front and rear aprons, which are 3D-printed at MINI’s Plant Oxford in the UK using recycled carbon fiber.

On the inside, the MINI is stripped back to the basics, with just the front two seats remaining, and a fully welded roll cage. There’s plenty of carbon-fiber in the cabin too, all in the name of reducing weight.

This carbon fiber diet has helped reduce the MINI’s weight by almost 300lb (130kg( compared to the MINI Electric, weighing in at 2,765lb (1,230kg). With the 181hp motor also derived from the MINI Electric, that helps shave more than half a second off the regular car’s 0-60mph time.

The MINI Electric Pacesetter will make its debut in Formula E at next month’s Rome ePrix, the second round on the 2021 season calendar. At the wheel will be official Formula E Safety Car driver Bruno Correia, who commented:

“Agility, performance and a cool looking car. The MINI Electric Pacesetter Safety Car of FIA Formula E World Championship has got it all. Very fun to drive, it feels like karting.”