Think “classic Mini” and images of English villages, cobblestone streets, and afternoon tea come to mind. Oh, and the buddy-bandit movie The Italian Job – both of them. Living up to its name and purpose (its genesis was a wartime fuel shortage), the Mini was indeed miniature and fuel-efficient, but it also happened to be a sales Goliath.

Produced from 1959 to 2000 with variations only in its name (i.e., Austin, Morris, Cooper), the wee-car proved a dominant force. Two million units were sold within the first decade. By the end of its run, almost 5.5 million had swarmed the global landscape.

But a classic Mini drives like a bumbling Mr. Bean. It’s quirky and fun at first, before growing annoying. With a suspension reminiscent of a pogo stick and amenities slightly better than a prison cell, the pre-BMW Mini isn’t a vehicle sought out for its creature comforts. Underpowered for the expressway, undersized for a grocery run, and yet there’s a certain charm to it. Nostalgia is nice and all, but how does something stay relevant past its prime? Engine swap! This being 2022, however, we’re not talking of the LS variety. Nope, we’re going electric.

This isn’t a one-off concept vehicle either. The automaker already did that in 2018, unveiling an electrified classic Mini at the New York Auto Show. The Mini Recharged Heritage is fully intended to breathe new life into an old standard for the masses. The name is a bit clunky, but converting a classic internal combustion model into a modern emissions-free traveler is a rather smooth transition. 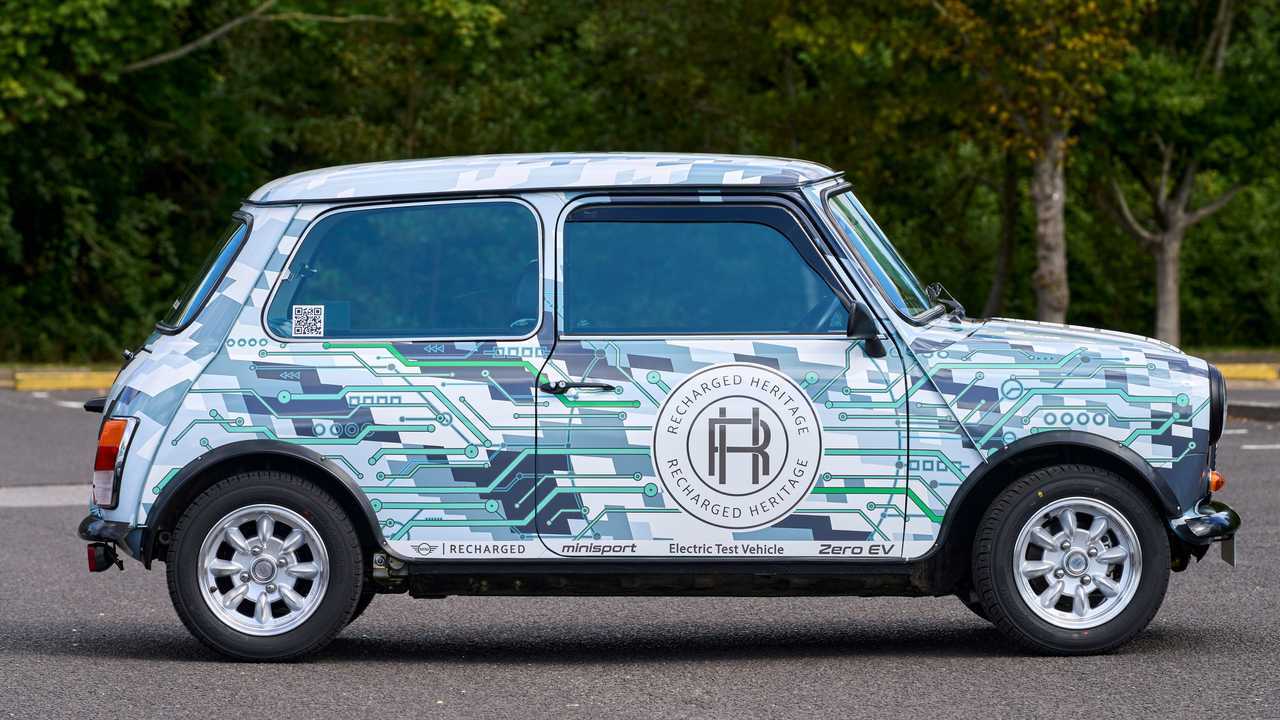 This Ain’t No Love Story

Mini offered me the keys to a prototype whose donor vehicle was a 1985 Mini Cooper. The vehicle was done up in a complete body wrap with the charging unit exposed in the trunk and an AEM performance monitor affixed to the dash. This was as raw as a test mule could get but it provided a legitimate look at what the final product would be.

Still, much consideration is taken to maintain the heritage and essence of the classic. Every modification is actually reversible. Case in point: the original engine is kept and stored in case of a future retrofit. And although modern touches are required, like swapping out the instrument cluster for one that shows battery charge and vehicle range, the styling of the updated IP is vintage. Nothing in or around the vehicle looks out of place. Even the shifter has the old-school aesthetic of a manual transmission (though, all of the EV conversions can only be applied to an automatic). 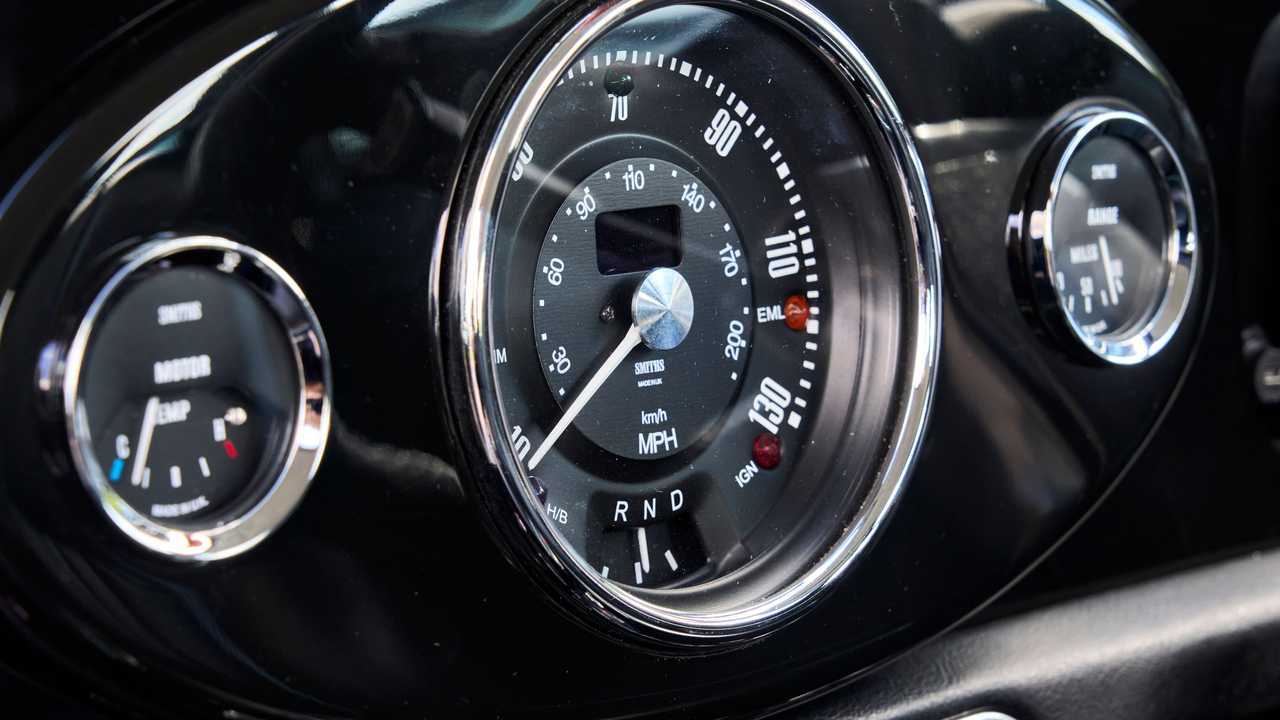 When owners receive their Recharged Heritage, their cars will feel different but also the same. Behind the wheel, the EV-converted Mini felt just like an old Mini. Which is not an insult. The character of the classic remains solidly intact. The vehicle is nimble but, yes, with that tried-and-true sensitive suspension. Damn you, cobblestone! But even then, the new old car didn’t rattle or creak. An engine note might drown out body flex sounds but this classic hatch has held up well that there were none. What you get in return is a pleasantly quiet drive.

Power and performance undoubtedly improve over the classic four-cylinder, with every model type benefiting from newfound instant torque. Vehicle weight will vary by options but regardless of which classic Mini is utilized as the donor vehicle, the EV kit will maintain the vehicle’s original dimensions and capacities. For example, a 1985 Mini Cooper hatch similar to the prototype car has a dry weight of 1,294 pounds. With a driver, weight distribution was 63:37. With a full load, that shifts to a more balanced 53:47. I had a passenger during my drive and the vehicle felt properly grounded. In spite of the overall weight being unchanged, the placement of the battery pack in the rear might’ve been key to providing that balance to offset occupants up front. 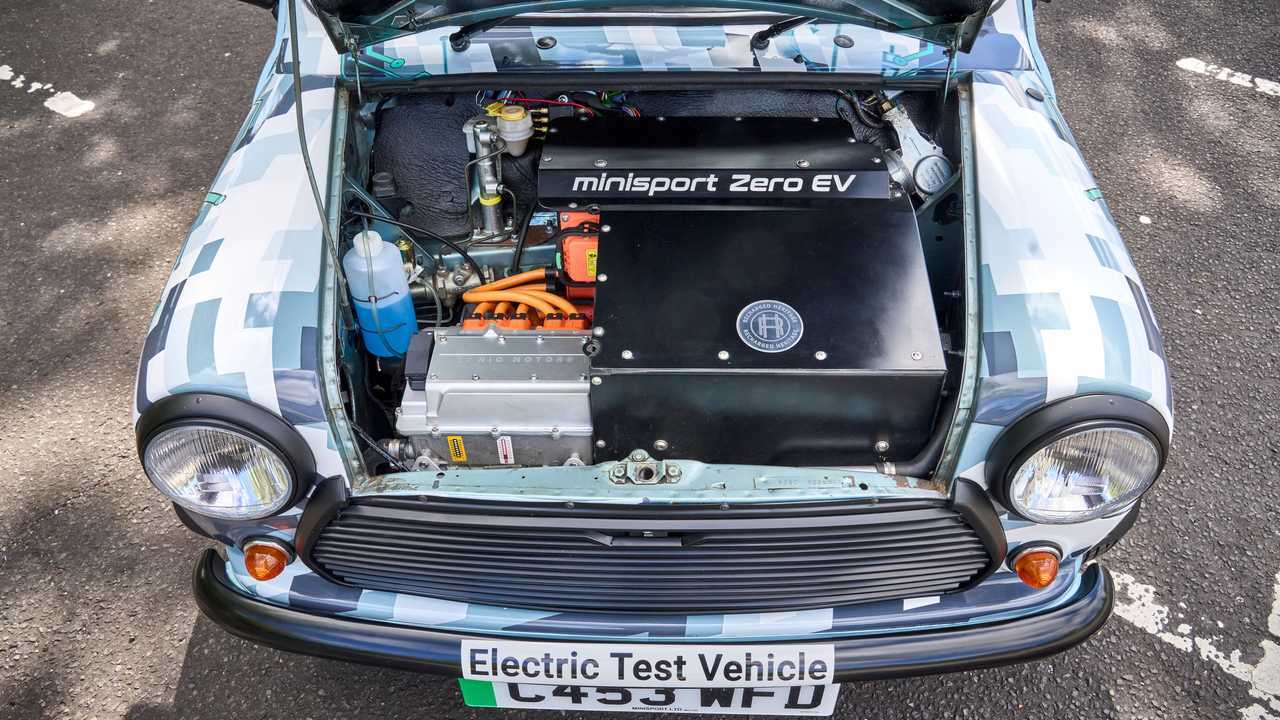 The Mini Recharged Heritage is available in three conversion types: Pure, Sport, and Bespoke. All involve replacing the gasoline engine with an electric drivetrain consisting of a 72 kilowatt electric motor and a 19.0-kilowatt-hour battery pack. The vehicle range is approximately 103 miles per WLTP estimates, which will translate to less range by EPA standards. And don’t expect DC fast charging capability here – the battery is so tiny that the 6.6-kW charge rate is plenty. With a Level 2 charger, the Mini Recharged Heritage takes three hours to fully charge or nine hours when connected to a household outlet.

The Pure Mini is rated at 75 horsepower and 92 pound-feet of torque. Its maximum speed is 90 mph with zero to 62 mph acceleration taking 11.5 seconds. Okay, so not blazingly quick, but neither was the original, whose output ranged from 34 to 77 hp and had 0-60 times that took… well, let’s just say Usain Bolt on a leisurely stroll can outrun the OG.

But on a vehicle that weighs half as much as a modern sedan, the Mini EV feels fast. Opt for the Sport and you’re looking at 97 hp and 111 lb-ft of torque. Acceleration also improves, so it takes just 8.5 seconds to 62 mph or 7.8 seconds in the now-included Sports mode. The trim also adds an upgraded braking system, a sports suspension, and Yokohama tires. 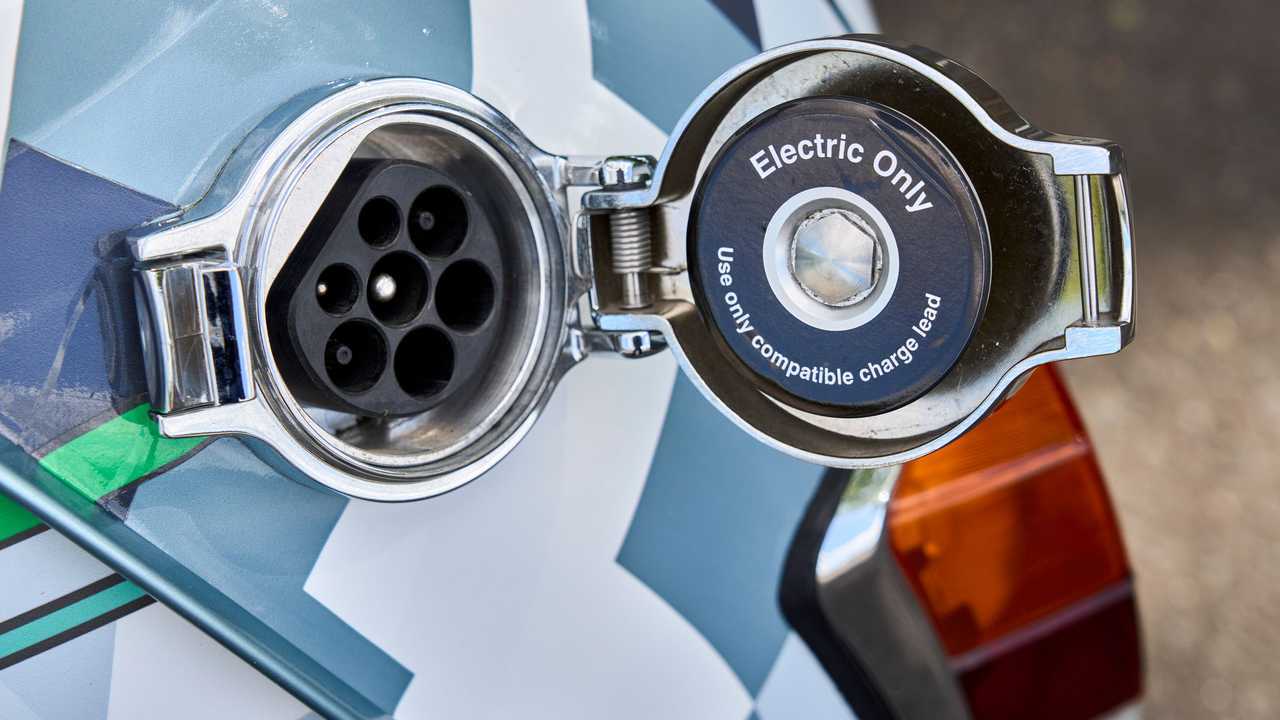 Go for broke with the Bespoke Mini, which builds upon the Sport model, and you’re looking at 100 hp and 129 lb-ft of torque. Top speed is dependent on vehicle options but a sub-six-second 0-62 run feels possible.

Even without the optional Sports drive mode, my test vehicle hurried along the streets of small-town England without feeling underpowered at all. The added Sports boost would be a definite benefit for reaching highway merging speeds, but perhaps in certain situations it could be too much quickness for too little weight. Instant torque, even just 111 pound-feet of it, can still catch you off guard. But I genuinely can’t think of a time I had this much fun driving a car that was as old, original, and at the same time, unfinished. 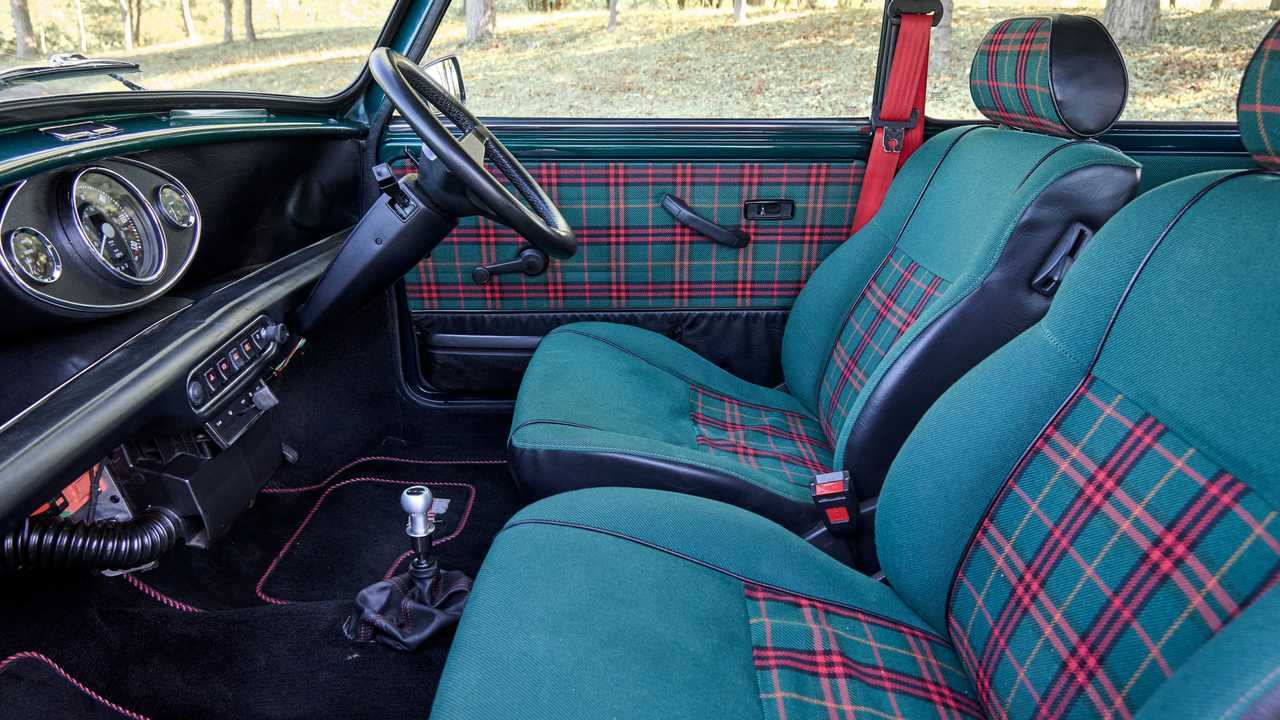 This Mini EV conversion won’t come cheap, however, but such is the price of customizations, innit? Customers have the option of bringing in their own vehicle or commissioning the team to search and purchase one for them. The bring-your-own-Mini route starts at £42,600 or $48,247 in today’s currency rate. And that’s just for the EV conversion itself. But it’s a quick swap that will take about two days.

Requesting additional options such as modern control switches, magnetic smartphone charging, or Paul Smith-designed flourishes will require extra build time and cost. Don’t have a classic Mini but want one and an EV version on top of that? The starting price for vehicle procurement plus the build goes up to £60,000 ($67,954). Order books for the Mini Recharged Heritage opened in September with first deliveries expected sometime in 2023. For now, only UK-based buyers are allowed to pre-order, but the Mini Recharged team is actively looking to expand sales into other markets, particularly North America.