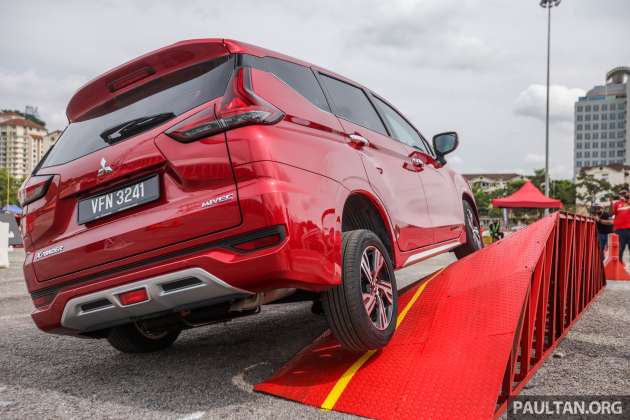 There’s a cool event happening this weekend at the Dataran Karnival next to the Shah Alam stadium (next to Giant). Mitsubishi Motors Malaysia (MMM) is having the Mitsubishi Xpander Venture Event there and it’s more than the usual vehicle roadshow. Way more in fact.

The star of the show is the Xpander MPV and visitors get to put the seven-seater through an obstacle course that I found to be surprisingly challenging for an MPV. We’ve done these things with pick-up trucks and Land Rovers but a family MPV?

The course has few creatively-named stations designed to highlight the Xpander’s qualities that set it apart from other MPVs. It starts with the Log & Roll, where you’ll drive the Xpander on repeated “logs” to test out its robust suspension and ride comfort.

The next activity is a very tight and twisty cone-marked course, and this Agility Challenge puts forward the MPV’s tight turning radius of 5.2 metres. The mazy route is not that easy – concentration is needed and you’ll have to go slow as you place the Xpander’s nose while taking note of the car’s rear. It’s OK if you hit a cone or two – I did too.

Next on the menu is the Roller Conveyer, which is an object lesson on the effectiveness of traction control and VSC. If you don’t know exactly how VSC works, you will after this no-grip exercise. Side Traverse sees you put the Xpander sideways on a ramp, and at a point, one wheel will be fully suspended in the air. Unless you’ve been off-road or tried a special course such as this, it will be the closest most people will get to “toppling over”. Don’t worry, because an instructor will be guiding you all the way from the passenger seat.

Likewise, the Devil’s Angle has well, angles that will scare many drivers. Although not as steep as the 45-degree Red Peak Adventure course that MMM did some years back for the Triton, it’s challenging for an MPV and you’ll drop down to a water water-wading “pool” with a “ruler” that shows the level of the water.

As you dive in, you can see the front camera being submerged on the head unit screen, which is very cool. One more up and down and the course is complete. You can now claim a Mitsubishi cap and join a lucky draw with prizes such as a Nintendo Switch, G-Shock watch and a jacket by The North Face.

Once again, over the course of work, we’ve done exercises like this and tougher ones too, but never on anything that’s not a truck or hardy SUV. Not only am I surprised that the Xpander handled all those angles without damaging itself, I’m pretty sure that its seven-seat MPV rivals in Malaysia would not have managed to do so.

Why so? Aside from the fact that its 205 mm ground clearance is the highest in class, check out the Xpander’s minimal overhangs at both ends, and how “at each corner” the wheels are (relatively, for a three-row MPV). Shorter overhangs = better approach and departure angles. I never quite saw it this way before, but the Xpander will be able to go further off tarmac than its rivals, and handle urban obstacles better. Think floods, ramps and kerbs.

By the way, the actual experience is way more dramatic than what’s depicted here, as is always the case with pictures/video. So, if you’re free this weekend, head over to the Shah Alam stadium (10am to 6pm) to try out the Xpander on this obstacle course, even if it’s just to see for yourself the application of ground clearance and approach/departure angles.

There’s free flow of cotton candy and ice-cream for the kids; and local celebrities such as Sherry Alhadad, Sharifah Shahirah and Bell Ngasri will make appearances. Don’t forget the lucky draw, too.

If the Xpander is convincing enough for a place in your porch, those who book and register once can choose to enjoy either a low monthly instalment rate from RM798 or a low interest rate of 2.38%, valid with Maybank or Public Bank. You can also opt for a special trade-in programme that offers RM2,000 support. Book any MMM vehicle and get an 8oz Stanley tumbler.

Don’t leave without checking out the cool motorsport-themed Xpander inspired by the Xpander AP4 rally car and a Triton dressed up in the style of the Asia Cross Country Rally (AXCR) winning Triton Rally Car. Camping is cool these days and MMM is pitching the Xpander and Triton as perfect camping cars – get inspired by the gear on display.