It’s a simple fact that electric vehicles don’t go quite as far per charge in colder temperatures as they do when it’s warm outside. The Ford F-150 Lightning is no exception, but as with all EVs, there are ways to combat winter range loss.

Ford recently published its winter driving recommendations for F-150 Lightning owners and we took it a step further in the video above. I’ll review Ford’s recommendations as well as chat with Ford’s VP of electric vehicle programs, Darren Palmer, and Jeff Head, an F-150 Lightning owner that lives and drives his electric truck around the frozen tundra of Anchorage, Alaska. 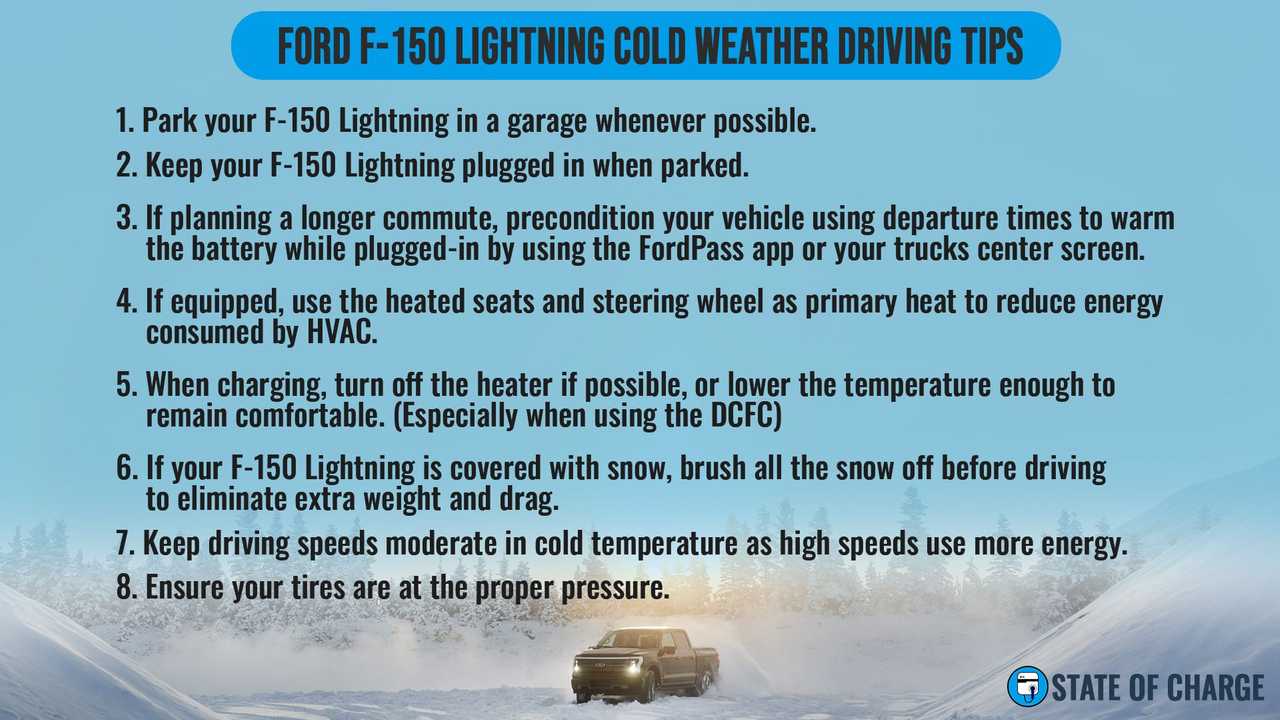 I’ve been driving my electric vehicles through the past thirteen winters here in the Northeast so I have a little experience with this topic. It’s important to understand your range will be reduced by as much as 33% to 40% in some extreme conditions. However, with the proper preparation, you can take back some of the range you would have lost to the cold.

In the video, I discuss how preconditioning your Lightning when you need the extra range will assure that you leave for your destination with the vehicle fully charged and with a pre-warmed battery and cabin. I also have an entire clip from Ford that explains in detail how to set the preconditioning feature from the FordPass app as well as from the infotainment system inside the truck.

Other than using the preconditioning feature, one of the easiest and most effective things to do is to simply drive a little slower. At any temperature, the faster you drive on the highway the less range you’ll have. However, in colder temperatures, the wind resistance actually increases because cold air is denser than warm air.

Shaving 5 or 10 miles per hour off of your normal driving speed can result in an additional 10 to 20 miles of range and may make the difference between having to stop and charge along the route or making the destination on a single charge. Slowing down a bit is also safer, as sudden patches of frozen road surfaces are easier to maneuver at slower speeds.

In addition to reviewing the cold weather driving recommendations, I had the chance to speak to Ford’s VP of Electric Vehicle Programs, Darren Palmer, about driving the Lightning in the winter months. Darren also drives a Lightning as his daily driver, so he knows a bit about driving it in cold weather as well.

Finally, I also had the chance to speak to Jeff Head, a Lightning owner that lives in Anchorage Alaska. Jeff’s owned many pickup trucks and said the all-wheel drive system in the Lightning is the best he’s ever experienced – and that includes his combustion F-150.

So check out the video and let us know what you think. Did we miss anything? If you’re an experienced EV owner let us know if you have any more cold-weather driving tips.