Sharp new look for the Hyundai Kona SUV is promised, with an updated electric model and hot Kona N coming in 2021 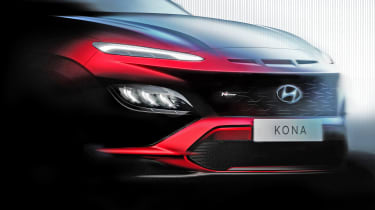 Hyundai is preparing to launch an updated version of its smallest SUV, the Kona. The Skoda Kamiq rival has been teased in a series of images ahead of going on sale later in the year.

The images of the redesigned car give us a hint as to what the facelifted Kona will look like. According to Hyundai, it will get a “wider stance and a shark-inspired nose,” while we can also spot new, slimmer daytime running lights and three sporty looking slits beneath the bonnet on the newly confirmed N Line version of the crossover.

Hyundai says that the Kona N Line will receive a sportier look inspired by the company’s current line-up of N Line models. It gets larger air intakes and a more aggressive looking front bumper. A black honeycomb style grille with N Line badging rounds off the new look at the front. 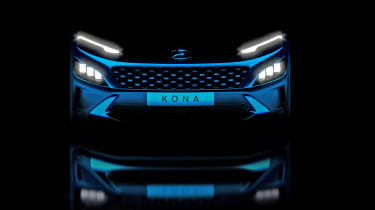 We haven’t seen any teasers detailing the rest of the car’s makeover, but we anticipate subtler changes around the sides and the back, limited to new LED taillight signatures and an updated selection of wheels and paint colours for buyers to choose from.

Tech details are still under wraps, but we anticipate the Kona will receive new infotainment technology from elsewhere in the Hyundai line-up, and digital instrumentation will become available for the first time.

As for engines, the line-up will continue the company’s roll-out of 48-volt mild hybrid technology. A plug-in hybrid will remain, and the Kona Electric will also be updated with a facelift of its own, later in the year.

As for the long-awaited and much spied, 247bhp Kona N, it now looks as if this model will be revealed in 2021 as a further model within the new-look Kona line-up.