Rolls-Royce has released the first in a series of four teaser videos, which detail the design process of the second-generation Ghost 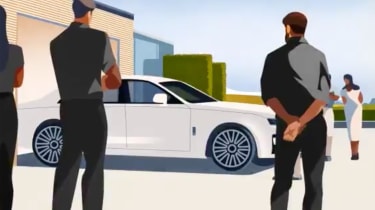 Rolls-Royce has provided our first official look at the styling of the next Ghost limousine, with a series of four animated videos teasing the newcomer’s design.

The all-new model will make its debut later this year, sitting on a new platform, with evolutionary styling but vastly improved interior technology.

This latest announcement also marks confirmation from Rolls-Royce that a second- generation Ghost is on the way. The outgoing model has been on sale since 2009 and, although it received a heavy facelift in 2014, it was starting to show its age against younger rivals, such as the latest Bentley Flying Spur.

Rolls-Royce outlines the foundations of the new Ghost’s design principles by stating that the entire car’s aesthetic was built around the concept of “post-opulence”, which the brand explains is a strain of minimalism.

As such, for its second generation, the Ghost will take on a far less fussy design. The car’s panel lines will be smoothed over, the body mouldings along the car’s flanks will be kept to a minimum and every piece of unnecessary styling being shunned – so the old car’s chrome badges and flashy brightwork will likely be ditched for more understated alternatives.

This simple design approach seems to be reflected by our most recent spy shots. Our previously spied mule features a pair of less complicated LED headlamps, a smoother front bumper and fewer creases in the bonnet and wings – although the car’s trademark suicide rear doors remain untouched.

Post Opulence: #RollsRoyce reveals the super-luxury consumer insights that informed new Ghost in the first of four animated films ahead of its official unveiling in autumn this year. pic.twitter.com/w28W40vLOl

Inside, the new Ghost will adopt Rolls-Royce’s latest infotainment screen and digital gauge cluster, as found in the Phantom and Cullinan. So, the car’s gauges will be displayed on a 12.3-inch TFT monitor, while the central infotainment screen will disappear into the dash at the touch of a button. The Ghost’s entire interior design will be overhauled, too.

We’ve also spied the more opulent long-wheelbase model, undergoing cold-weather testing in the arctic circle. The extra space between the axles is purely for the benefit of rear-seat occupants and is unlikely to drastically alter the experience from the driver’s point of view.

Like its bigger brother, the eighth-generation Phantom, the new Ghost will be based on Rolls-Royce’s all-new “Architecture of Luxury” platform. The fully-scalable, all-aluminium space-frame chassis underpin all of the company’s next-generation models, taking the place of the previous Ghost’s BMW 7 Series-based underpinnings.

Under the bonnet, we expect the new Ghost will be fitted with the latest iteration of Rolls’ 6.75-litre V12 engine, which now sports a pair of turbochargers. It’s the same unit found in the Phantom and the Cullinan – and, like both of those cars, it’ll be mated to an eight-speed automatic gearbox and offer power figures in excess of 560bhp.

Now read our review of the previous-generation Rolls-Royce Ghost. Let us know your thoughts in the comments section below…