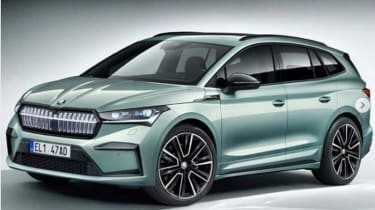 Skoda is all set to launch its first purpose built electric vehicle tonight but The Enyaq iV SUV is already out in the open thanks to what appear to be official images of the car that have leaked on social media.

Previous sketches released by the manufacturer have provided a realistic look at the design of the crossover but now we can see the Skoda Enyaq completely undisguised for the first time.

We’ll be bringing you full details of the new Skoda Enyaq from 18:30 tonight and you can watch the reveal event live below.

When it goes on sale in 2021, the Enyaq will be Skoda’s first EV based on the Volkswagen Group’s new MEB platform and will act as a sibling to the upcoming Volkswagen ID.4. It will also provide fresh competition for the likes of the Kia e-Niro and Peugeot e-2008.

The pictures we’ve seen so far confirm that the Enyaq will draw plenty of inspiration from the Skoda Vision iV concept, as well as the brand’s existing combustion-engined line-up. For example, EV’s headlamps draw inspiration from both the Kamiq crossover and Octavia hatchback, sharing similar daytime running lights and individual LED reflectors.

The rest of the car’s styling is lifted from the Vision iV concept. Naturally, some of the show car’s details, such its wafer-thin headlights and wing-mounted rear-view cameras, will fall by the wayside for the production car, but the overall shape and dimensions (with a footprint between that of a Karoq and a Kodiaq) will remain familiar.

However, the standard, production-facing Enyaq ditches the concept’s coupe-like roofline in favour of a more practical, pseudo-estate shape – but we know that a coupe-SUV version of the car is also in the pipeline. The car’s tail-lights are also very similar to those found on the latest Octavia.

Skoda’s interior design for the Enyaq is influenced by the latest Octavia. There’s a small digital instrument binnacle and a two-spoke steering wheel that’s lifted from the hatchback – while a large 13-inch infotainment screen dominates the centre of the dashboard. 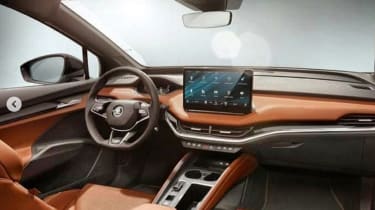 Under the central screen is a strip of piano-key style buttons and a large centre console with a dinky drive selector. Behind the instrument panel sits a projector for a head-up display with augmented reality features.

Skoda says the main difference between the cabin of the Enyaq and its combustion-engined siblings is the material selection. The EV trim uses more natural, recycled and sustainably  produced materials – such as recycled PET bottle plastic for seat coverings, and leathers tanned using extract from olive trees, rather than traditional chemical compounds.

The firm’s interior designer, Norbert Weber, promises that customers will be offered several interior themes using sustainable materials, while Skoda has also claimed a boot size of 585-litres. Skoda has also said that the Enyaq will boast a “generous” amount of cabin space. The company says it’ll have a similarly sized cabin to the Kodiaq SUV, despite being shorter in length than the conventional Octavia hatchback.

Skoda recently released some extra information on the Enyaq’s platform and powertrain. We knew the pure-electric SUV was going to be based on the Volkswagen Group’s MEB underpinnings – but Skoda has now confirmed that buyers will have their choice of rear- or four-wheel-drive, along with three battery sizes and five power outputs.

The entry-level model, called the iV 50, will have a 55kWh battery and a rear-mounted electric motor with an output of 146bhp. Skoda says it’ll offer around 211 miles of range. Above that are models with a 62kWh battery, badged iV 60, which get a more potent 177bhp electric motor on the rear axle and a range of 242 miles.

The largest battery on offer will be 82kWh, which can be had with either a rear- or four-wheel drive electric powertrain. Skoda says the top spec models will also be able to cover up to 310 miles on a single charge.

Finally, the Enyaq’s platform will offer support for the latest 125kW DC fast charging technology, which should allow the SUV’s battery pack to recover 125 miles of range in as little as 15 minutes.

As the first Skoda model to be based on the MEB platform, the Skoda Enyaq will be a landmark car for the brand. It’s the next step in a Skoda plan to offer 10 electrified models (plug-in hybrid and fully electric) under the iV sub brand by the end of 2022, but it also uses tech that we’ll see in wide use across the VW Group in the coming years.

Skoda estimates that electric and plug-in hybrid vehicles will make up 25 percent of its sales by 2025 – and hopes are high that the Enyaq will realise a significant chunk of that total figure by slotting into the ever-popular SUV class. To support the Enyaq’s endeavour, Skoda will also invest €2 billion in electric technology over the next five years.

What does the Skoda Enyaq have to beat? Czech out our list of the best electric cars on sale now…