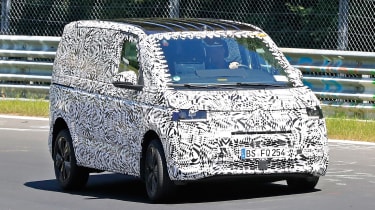 Our spy photographers have spotted a plug-in hybrid version of the upcoming Volkswagen Transporter T7 undergoing testing at the Nurburgring. Due to go on sale next year it will compete against the likes of the Ford Transit, Mercedes Sprinter and Vauxhall Vivaro.

The main giveaway that this is the plug-in hybrid version of Volkswagen’s next-generation Transporter is the extra filler door on the van’s front right quarter panel, which is hiding a charging socket.

These latest images also offer further substance to the rumours that the new Transporter will make the shift to Volkswagen’s MQB underpinnings. All of the company’s current PHEV models are based on this platform and Volkswagen is unlikely to develop an all-new chassis to house the technology in the Transporter, due to the high costs involved.

As such, the new plug-in hybrid Transporter should feature the same powertrain as the Mk8 Golf PHEV. That powertrain comprises a turbocharged 1.4-litre four-cylinder petrol engine and a 113bhp electric motor, for a maximum combined output of 242bhp and 400Nm of torque. 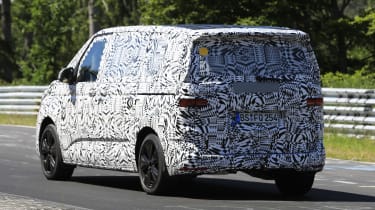 The rest of the Transporter’s engine range will be made up of the Volkswagen Group’s familiar range of turbocharged 2.0-litre four-cylinder diesel engines, which are used in cars such as the Tiguan and SEAT Ateca SUVs. Like the T6.1, this new model should be offered with either front- or four-wheel drive, too.

The styling of the new Transporter will be an evolution of the current model but with touches taken from the brand’s latest passenger car range. The spy shoes show it has slightly more rounded corners and a wider glasshouse, while the front end styling also mimics that of the new Golf, sharing a similar radiator grille, bumper shape and LED headlamp design, with winglets that extend into the front quarter panel.

Volkswagen has also extended the Transporter’s dashboard and windscreen over the front axle and slimmed down the A-pillars. The German firm has added a new quarter light window above the A-panel in an effort to improve visibility and allow more light into the cabin.

Inside, we expect the Transporter T7 will feature a similar range of technology upgrades to the Golf, with the range topping model receiving a digital instrument binnacle and a new 10-inch infotainment system – along with the usual driver assistance technology, such as lane-keeping assist, cruise control and a blind-spot monitoring system.

The previous-generation Transporter T6.1 was also available with an all-electric powertrain, which was developed collaboratively with the German tuning company, ABT. The system comprises a 109bhp electric motor and a 37.3kWh battery pack, offering a claimed range of 83 miles. As such, an all-electric version of the new T7 is a probability in the van’s lifetime.

What do you make of the new Volkswagen Transporter T7? Let us know in the comments section below…