PSA’s eVMP architecture will give the upcoming, entry-level Peugeot 5008 an all-electric range of around 350 miles 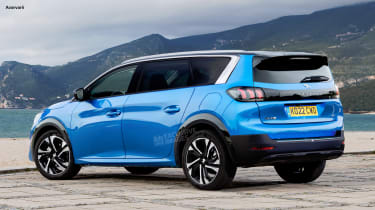 Peugeot will refocus its flagship SUV, the 5008, into a more practicality-focused model when its next generation arrives in 2023, Auto Express can reveal. Like the next 3008, the the next Peugeot 5008 will receive a radical cosmetic overhaul and an all-new dedicated electric platform.

PSA recently released some specifications on its new eVMP (that’s “Electric Vehicle Modular Platform”) architecture, which will underpin all of the Groupe’s C- and D-segment saloons and SUVs from 2023 onwards – such as the upcoming replacements for the 3008 and 5008.

Depending on the body which is bolted to the platform, PSA’s eVMP underpinnings will offer a range of between 250 and 400 miles – and while the smaller 3008 should be able to reach the upper end of that scale, the 5008’s maximum range will likely be closer to 350 miles, due to the SUVs added size and weight.

The platform will also offer support for PSA’s latest battery packs – which will range from 60kWh to 100kWh – as well as either front- or four-wheel drive powertrains. The most potent electric powertrain on offer will have around 335bhp, while entry-level models will come with the company’s existing 134bhp unit.

PSA will also shun pure combustion engine power with the next-generation 5008, opting instead for a range of mild-hybrid and plug-in hybrid units to complement the electric options. As the platform is an evolution of the company’s existing EMP2 platform, though, these powertrains could well be evolutions of the brand’s current technology.

A facelifted 5008 should arrive by the end of this year. But looking further into the future, customer analysis has led some inside Peugeot to push for the next new generation of the car to be moved in a more extreme direction – forgoing a little SUV style in favour of practicality that its owner base seems to appreciate.

Speaking exclusively to Auto Express before his switch to Renault, Peugeot’s outgoing design chief Gilles Vidal said: “The 5008 is bought by young adults who have kids. So the bigger car is bought by the families but often the people with more means, more money, are buying the smaller one [the 3008]. That may lead us for the next generation of 5008 to go even more square and find a way to make it sexy.”

Our exclusive image shows one concept for how Peugeot could increase the 5008’s practicality. A more vertical rear glass line would improve overall boot capacity and improve accommodation for the third row of seats. Vidal’s task will be to make the roofline still look aggressive, perhaps through clever use of the side chrome trim, and to reduce the visual depth of the car’s metal flanks without resorting to complex, fussy surfacing.

Vidal said that his team was experimenting with how to make a more practical 5008 still have visual appeal – the sort of characteristic that has persuaded increasing numbers of people to move away from MPVs in favour of SUVs.

“When I say square in relation to the 5008, it shouldn’t be a boring square,” he said. “There’s a place, for sure, to make it more practical and then generate a design that is still amazing but not through dynamism. It’s another kind of sexy.”

What will the next Peugeot 5008 have to beat? Read our list of the best large SUVs on sale right now…