Hyundai i20 N will debut next year, pumping out around 200bhp with a sporty body kit 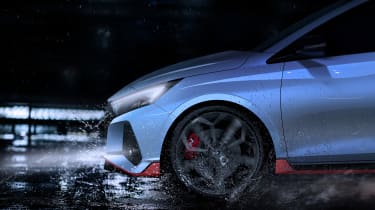 Hyundai has offered our first official glimpse at the all-new i20 N. The Korean brand’s latest hot hatchback will go on sale in the UK next year, where it will offer fresh competition for the Volkswagen Polo GTI and the class-leading Ford Fiesta ST.

These official images provide our best look yet at the Hyundai i20 N’s styling. The new model will feature an aggressive front bumper with broader intakes, deeper side skirts and a sizable rear wing – identical to the unit seen on our spied test mules.

Like its big brother, the i30 N, the new i20 N will be available with Hyundai’s Performance Blue paint scheme – which is exclusive to the company’s N models. Buyers will also get a wider track, lower suspension, a larger bore exhaust system and a set of 18-inch alloy wheels, behind which will sit red N-branded brake calipers.

The i20 N’s cabin will receive a similar range of sporty trappings – all of which will be carefully selected to keep the hot hatchback competitive with the Fiesta ST on price. As such, the major interior revisions will be new sports seats, a sports steering wheel and an N-branded gear stick.

Despite sharing its body-in-white with the standard i20, Hyundai remains adamant that the i20 N will drive differently to the entry-level car, thanks to its unique steering and suspension systems. Both have been honed at the Nurburgring, which is something Hyundai’s R&D boss, Albert Biermann (who was formerly at the helm of BMW’s M division), believes is essential to the N brand’s chances of long-term success.

The mass-market third-generation i20 is based on a new platform – and, while the new car was launched in the UK with 1.0-litre three-cylinder petrol power only, the supermini’s chassis can also accommodate the Korean company’s four-cylinder engines.

One of Hyundai’s previous teaser videos all but confirmed the company’s plans to use a higher displacement, four-cylinder unit in the i20 N, which should give its hot supermini enough clout to compete with the Fiesta ST and Polo GTI – both of which produce 197bhp. 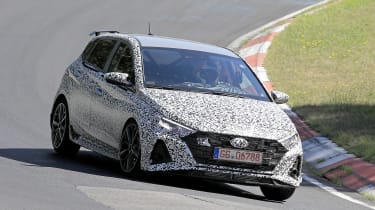 As it’s expensive to develop an all-new engine, we expect Hyundai will use a detuned version of the i30 N’s existing turbocharged 2.0-litre four-cylinder petrol engine, with an expected output of around 200bhp. The prototype shown in an official teaser video has an exhaust note which was eerily similar to that of the larger i30 N.

The engine should be mated to a six-speed manual gearbox as standard and, due to the i20’s relatively light kerb-weight, a 0–62mph time of around seven seconds should be attainable, along with a top speed of over 140mph. Buyers should also get a range of drive modes and a sophisticated traction control system.

The i20 N will be introduced at a time of increasing uncertainty for small, fast hatchbacks, due to the latest European fleet-wide emissions regulations – which car manufacturers must adhere to or face hefty fines. As such, low volume, high CO2 projects, such as the i20 N, are becoming more difficult for car companies to justify. 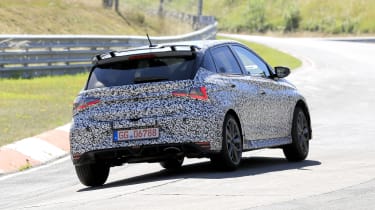 Peugeot has all but confirmed that any GTI version of the 208 has to be fully electric, given the emissions rules and the limitations of the platform it uses, while a Renaultsport version of the latest Clio has been axed.

Hyundai, however, has a good head start on its pure-electric and hybrid technology, with the fully electrified Ioniq hatchback and Kona crossover. As such, it has a bit of leeway in its CO2 fleet average to play with – hence the arrival of the new i20 N.

What’s more, we’re expecting a starting price of around £20,000 for the i20 N, which should give Hyundai’s founding sporty supermini a competitive edge against the Fiesta ST – which is currently priced from £21,500 in the UK.

What do you make of the new Hyundai i20 N? Let us know in the comments section below…