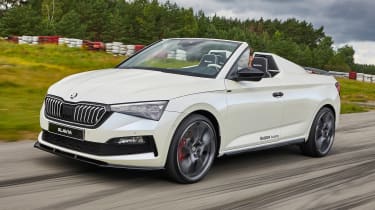 Skoda has revealed a new one-off concept car called Slavia, which is a wholly transformed version of the Scala hatchback built by a team of 31 apprentice engineers.

The one-off Skoda Slavia is a two-seat roofless roadster, and the firm says it is inspired by the 1957 Skoda 1100 OHC prototype racer designed for use in endurance rallies. It follows the company’s previous student-led project, the Kodiaq-based Mountiaq pick-up truck.

Skoda’s apprentice team have reinforced the Scala’s chassis, welding the rear doors in place and removing the hatchback’s roof. It gets a bespoke tonneau cover with twin speedster humps, along with a new boot-lid and unique rear spoiler. 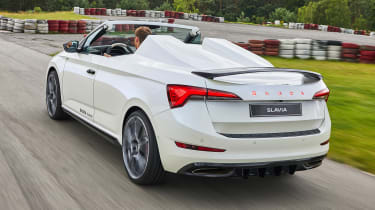 The Slavia also receives several tech features not found in the Scala road car. The side skirts and alloy wheels feature programmable LED lights, the Skoda lettering across the car’s tailgate is backlit in red and there’s a 320-watt sound system in the cabin, complete with a 2,250-watt subwoofer.

The student engineers cherry-picked the rest of the Slavia’s modifications from Skoda’s parts bin. The spider’s 20-inch alloy wheels are borrowed from the Kodiaq vRS, the side skirts are lifted from the Scala Monte Carlo and the disc brakes and calipers are identical to those found on the Octavia vRS.

Despite the outlandish cosmetic modifications, the Slavia is powered by an unmodified turbocharged 1.5-litre four-cylinder petrol engine and seven-speed automatic gearbox found in the Scala. The student team has fitted a slightly tweaked exhaust system, but the engine’s output remains at 148bhp and 250Nm of torque.

Alois Kauer, Head of the Skoda Academy, said: “The Student Car is the Skoda vocational school’s annual flagship project. For the seventh year running, our students are demonstrating the high standard of our in-house training by planning, designing and building an impressive one-off car.

“We enable them to design their dream car, working with professionals from our various departments. As a result, their training already familiarises them with processes that will become part of their working lives later on, when they graduate from our vocational school and embark on a career in our company.”

Do you want to see Skoda put the Slavia into production? Let us know in the comments section below…