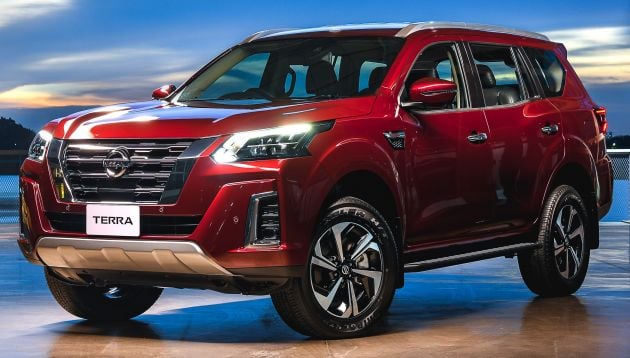 Three years after the Nissan Terra was launched in Thailand, the pick-up-based SUV has been given a facelift in the Land of Smiles. If this nipped and tucked model looks familiar to you, that’s because it made its debut in the Middle East in November last year as the X-Terra.

As such, the Terra sports the same revised front end, taking plenty of inspiration from the also-facelifted Navara and Patrol. It features a much larger V-motion grille, C-shaped LED headlights with quad ice cube-like projectors (claimed to increase brightness by up to 34%), an upturned centre air intake and vertical fog light surrounds, plus fake front fender vents.

The redesign continues at the rear, where you’ll find reshaped taillights and an arch-shaped chrome strip that goes over the badges and the number plate recess. The bumper has also been reprofiled, sporting wider reflectors that are mounted further down. New 18-inch turbine-style two-tone alloy wheels come as standard. 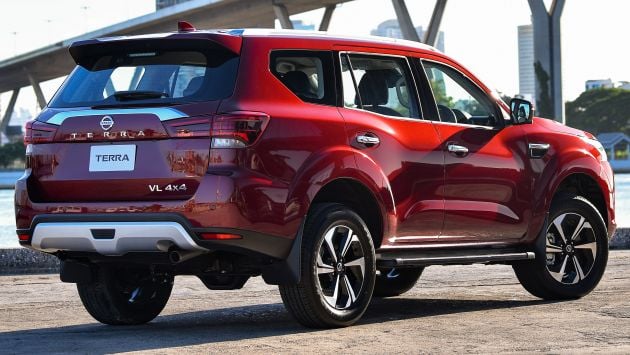 Step inside and you’ll find a comprehensively updated cabin with a new Almera-inspired dashboard that differs from the Navara, featuring more upscale switchgear. The reshaped seats are also claimed to be more comfortable, while an electronic parking brake replaces the conventional handbrake. The front windscreen and front side windows, meanwhile, are made from acoustic glass to reduce cabin noise – a segment first.

The Terra is also available with a larger nine-inch touchscreen for the NissanConnect infotainment system – complete with wireless Apple CarPlay and Android Auto compatibility – compared to the Navara’s eight-inch display, although the seven-inch multi-info display in the instrument cluster is identical to the truck’s.

Other updates include an available eight-speaker Bose sound system, a HDMI-compatible 11-inch flip-down rear monitor, a digital rear-view mirror, a 15-watt Qi wireless charger and a USB-C port raises the number of USB ports in the car to five across three rows. A dealer-installed hands-free powered tailgate is also offered. 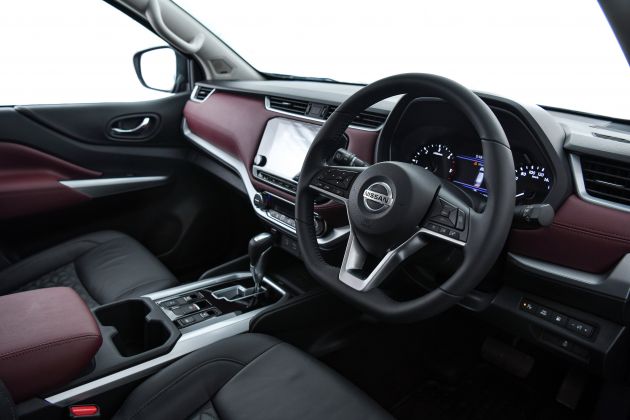 Just one engine option is available, that being the YS23DDTT 2.3 litre twin-turbocharged diesel mill, producing 190 PS at 3,750 rpm and 450 Nm between 1,500 and 2,500 rpm. It’s mated to a seven-speed automatic gearbox, with the VL also being offered with four-wheel drive and a locking rear differential.

Pricing for the facelifted Nissan Terra ranges from 1,199,000 baht (RM152,300) for the base E 2WD variant to 1,499,000 baht (RM190,400) for the range-topping VL 4WD. Four paint options – White Pearl, Brilliant Silver, Black Star and Twilight Gray – are offered, with the VL models also receiving Forged Copper and the Coulis Red you see here. These variants also get either a beige or burgundy interior colour scheme.