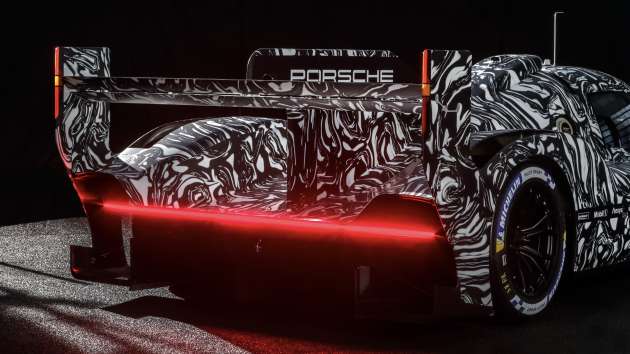 Porsche has released a batch of teaser images of its Le Man Daytona hybrid (LMDh) prototype racer from 2023, during which time it will enter the top class of the FIA World Endurance Championship (WEC) and the IMSA WeatherTech SportsCar Championship (IWSC).

The converging regulations for Daytona Prototype International (DPI) and Le Mans Prototype 1 (LMP1) categories means that Porsche will be able to enter premier endurance races on both sides of the Atlantic; the 24 Hours of Le Mans as well as the 24 Hours of Daytona and 12 Hours of Sebring. This will see Porsche return to top-flight endurance racing following its departure from LMP1.

“We are working all-out with our partner Penske on the development of the new LMDh prototype and [will] collaborate closely with chassis manufacturer Multimatic at all times,”said head of Porsche Motorsport Thomas Laudenbach.

“In January, we will begin intensive testing to ensure that we are optimally prepared for our 2023 competition debut,” Laudenbach added. Multimatic is one of several chassis constructors listed as approved suppliers to the LMDh series, including Dallara, Ligier and Oreca.

The LMDh class of race cars will run alongside Le Mans Hypercar (LMH), with LMDh being the more cost-effective of the two as it uses an adaptation of LMP2-class chassis, a standardised hybrid drive system and control electronics. LMDh-class race cars will weigh approximately 1,000 kg, while their hybrid powertrains will produce around 680 PS; teams are allowed to design their own engines and bodies to go with the approved chassis suppliers.

With Porsche entering the LMDh class that will see competition on both sides of the Atlantic, its North American operations will see Porsche Motorsport set up a base with Team Penske at the American outfit’s headquarters in Mooresville, North Carolina.