For $1,200, I did not buy a 1970 Opel GT, I bought a curvy metal sculpture stuffed with question marks. There was no telling just how bad the engine was damaged, how rough the body actually was, or if I could even make the car safe to drive. I’m pretty sure it’s haunted, too, because each time I sit in it, I hear spectral voices whispering, “why?” Or maybe that’s just the echo of a former coworker…

Nonsensical decisions aside, the sale was done, and now I had to deal with it. Once the car was at the office, it was time to do a more complete assessment. Here are some of the initial problems that came with the car. Buckle up. 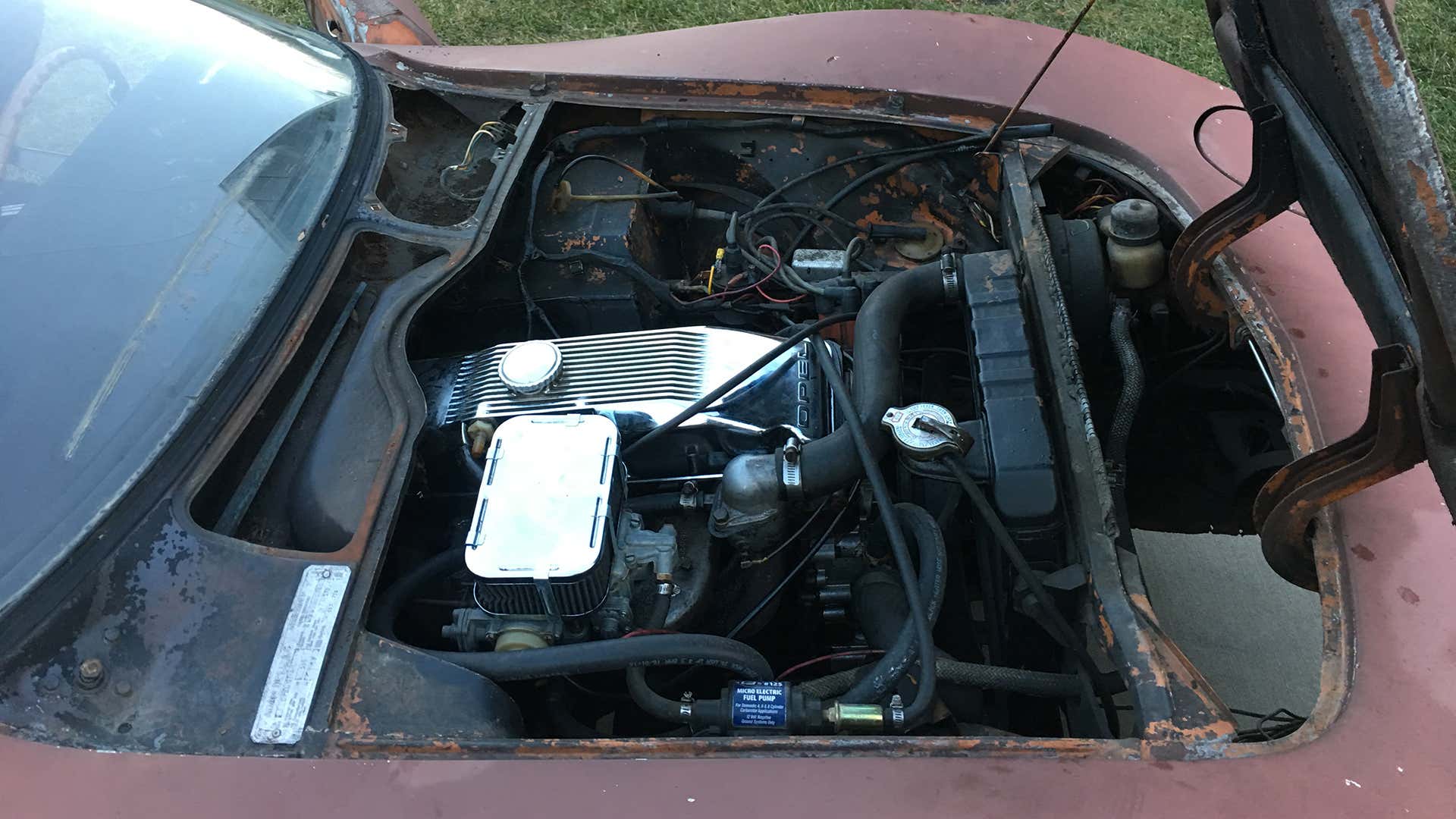 Love to cross wires and hoses across hot engine parts.

The GT’s hood design fits in with the car’s quirkiness with a carburetor bump, two vents on each outboard side, and a clamshell opening. Underneath my cool hood, however, it looked like a five-year-old had a bucket of oil for hand painting, then used that bucket to play “kick the can.”

The underside of the hood was coated with black gunk a power washer couldn’t work off, but the valve cover was shiny chrome, which suggests it’s been changed. Both the head gasket and the valve cover gasket appeared to be leaking, and I wasn’t sure those were the only spots. Everything was so covered in oil, it was difficult to get a sense of what was coming from where. Additionally, the heat shield on the backside of the engine bay was deteriorated, soaked in oil, and falling to pieces.

There were also a few customizations. The fuel pump had been switched from the stock mechanical pump to an electric unit, and the original Solex carburetor had been swapped for a Weber 32/36 carb. There also seemed like there were extra wires hanging around, though without knowing what this engine bay originally looked like, it was hard to tell what wiring was stock and what was changed. Furthermore, the bay had seemingly been painted black over its original orange color. And no, I’m not talking about the oil spray.

Most importantly, the engine no longer ran for any prolonged period. I could start it for a few seconds, but it would immediately die. 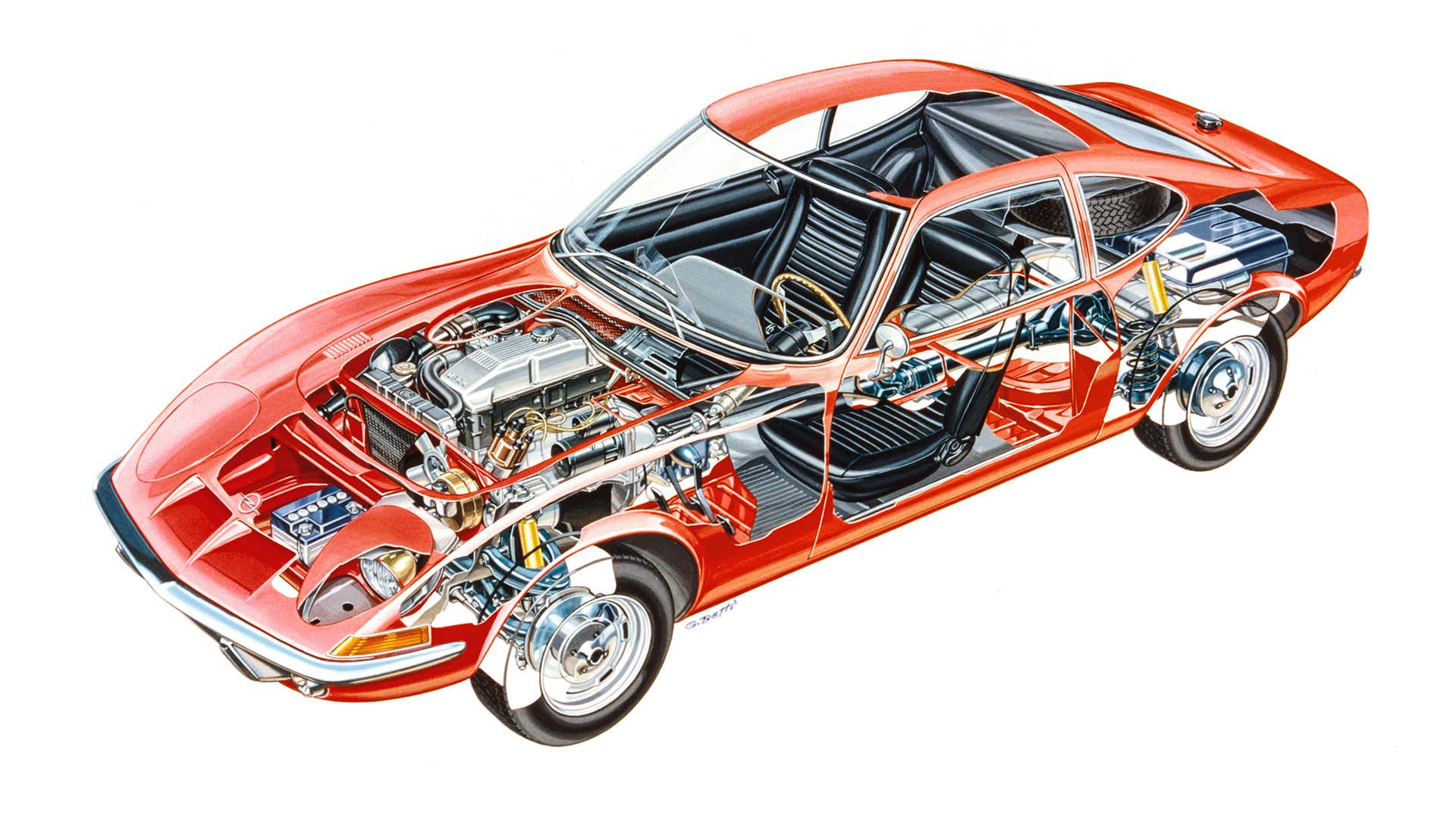 The battery essentially sat below and between the headlights.

From the moment I bought the GT, I had a passenger along for the ride. Yes, my battery rode shotgun, with the cables traveling from the battery through a hole in the GT’s floor, and up into the engine bay.

I later learned that relocating the battery is a common thing with the GT. It normally rides in the nose of the vehicle on a lower panel located ahead of the engine. Such a location made no sense, as those panels were prone to rusting through and leaving the battery exposed to the elements and at risk of falling out of the car. My GT didn’t even have that panel, as it assumedly rusted away before it was cut out altogether. Most commonly, GT owners will relocate the battery inside the car behind the seats to improve weight balance. The previous owner got sorta close, I guess. 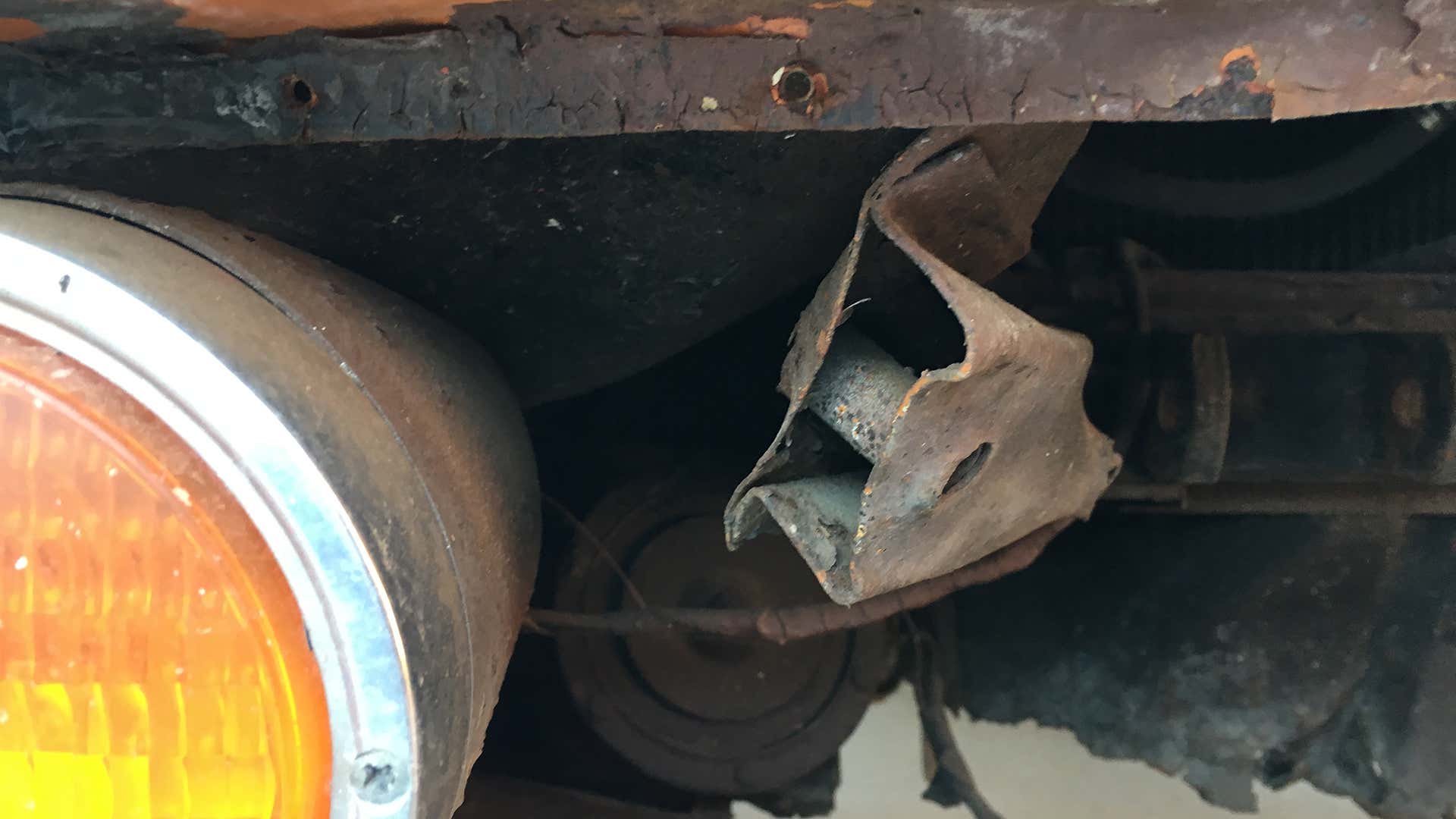 That piece of metal should be a straight rectangle pointing forward.

From what I could see, the frame looked to be in decent condition, save for two pieces that connected to the front bumpers. The metal frame pieces had been smashed and bent toward the passenger side of the vehicle, and the bumpers were completely absent. So, decentish? 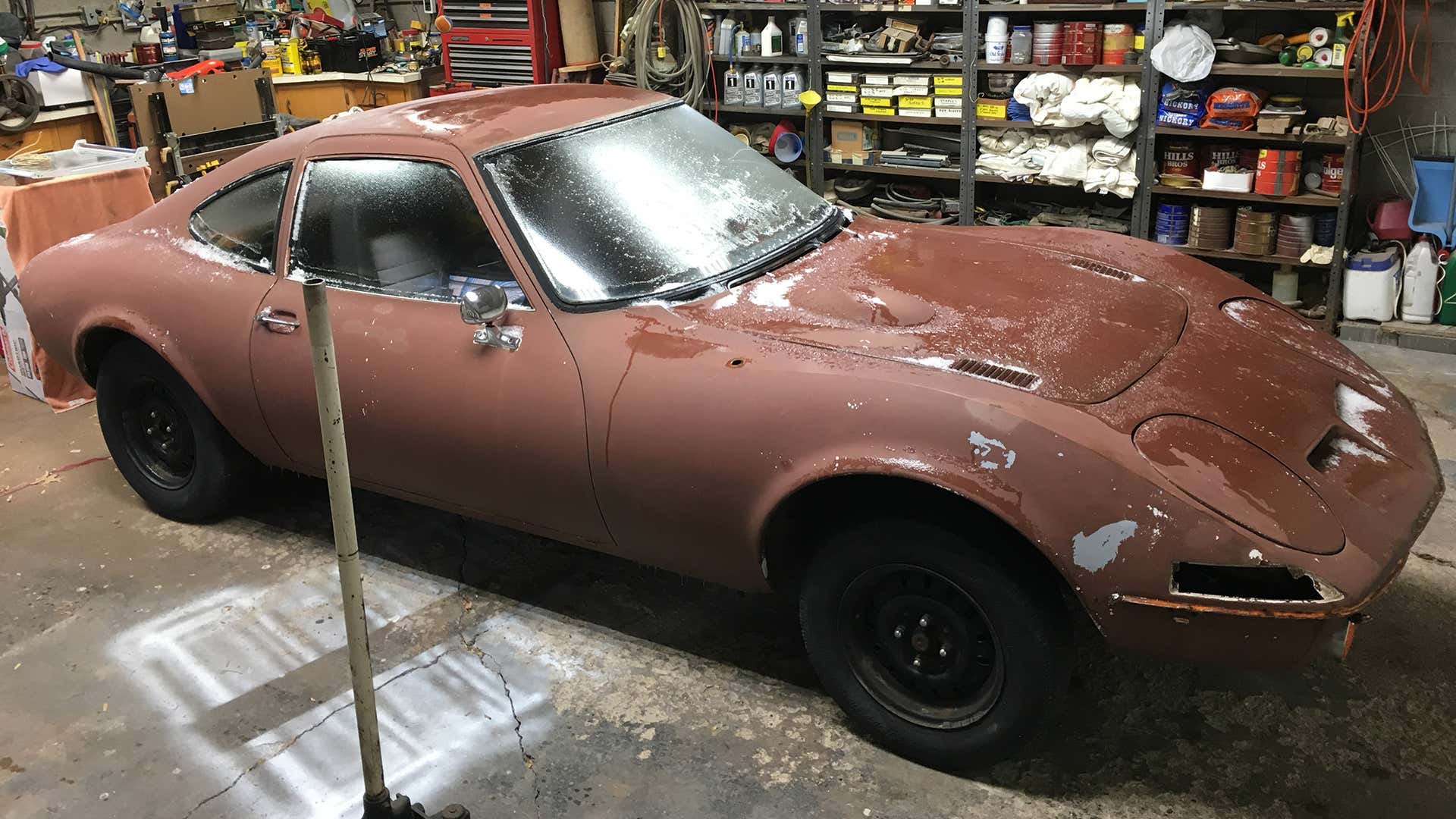 The GT and this garage have become fast friends.

You might expect the GT to be built with fiberglass, as was common of low-volume sports cars of the time, but it has a one-piece steel unibody. Our example had been in an unknown number of front and rear accidents, and it had noticeable damage, repairs, and crummy cover-ups.

This GT made an instant impression with its rust brown outer coat. Just how many times it’s been repainted is unclear. Rallye Orange was the original color, but in various places, we see gray, white, brown, and even yellow.

As for the question of rust, oh yeah, it has it. The primary rust spots seemed to be the rear corners, the interior floor boards, the rocker panels, the front nose pan, and inside the headlight tubs. Some of the rust is natural, while other parts might have been caused by exposed metal that resulted from accidents.

Those accidents put a crack in the lower front fascia, and the car had clearly run into something head-on. It might have been rammed from the back first, as the entire rear panel was out of whack and off-center. Multiple parts of the rear panel had been bondoed, and there was no telling where else it’d show up. The body was overall in decent shape, but underneath everything, a lot of work presented itself. 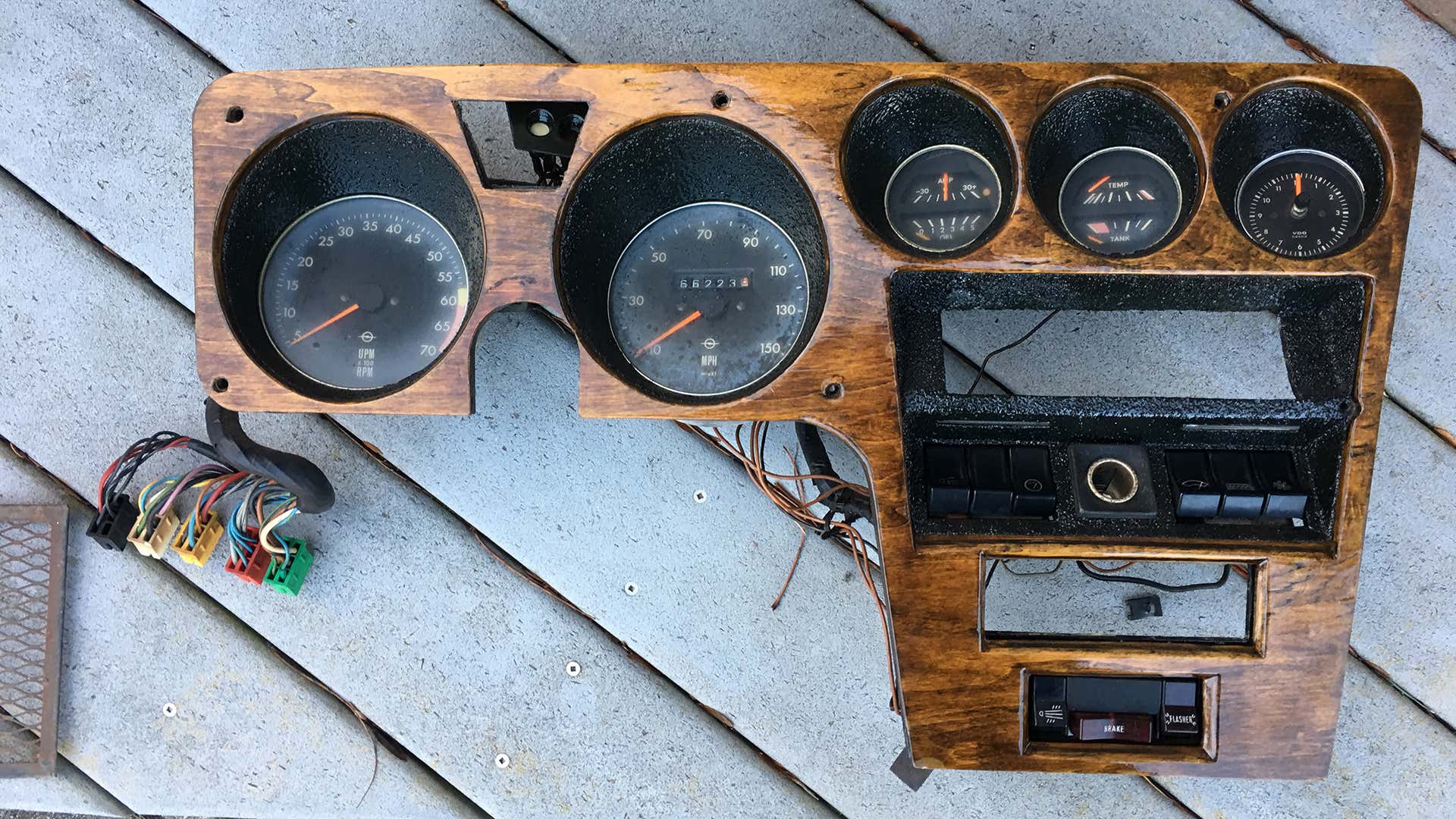 We have no idea why somebody added wood.

The interior wasn’t necessarily in awful shape, but it most certainly wasn’t good. Most of the parts seemed to be there, but some things had been changed. The original stereo had been swapped for a cheapo single-din head unit and some crummy aftermarket speakers, and the dashboard had seen its own terrible alterations. Not only was it cracked, somebody also glued a woodgrain piece on top of the original plastic dashboard, then sprayed what seems to be rhino liner on the inside of the gauge viewing cylinders.

The steering wheel is also cracked, and the front seat is broken and cannot be repositioned. Beyond the aforementioned rusted-out floor panels that likely need fixing, the rest will likely be cosmetic and making sure everything is buttoned up, including the loose door panels and interior carpeting. 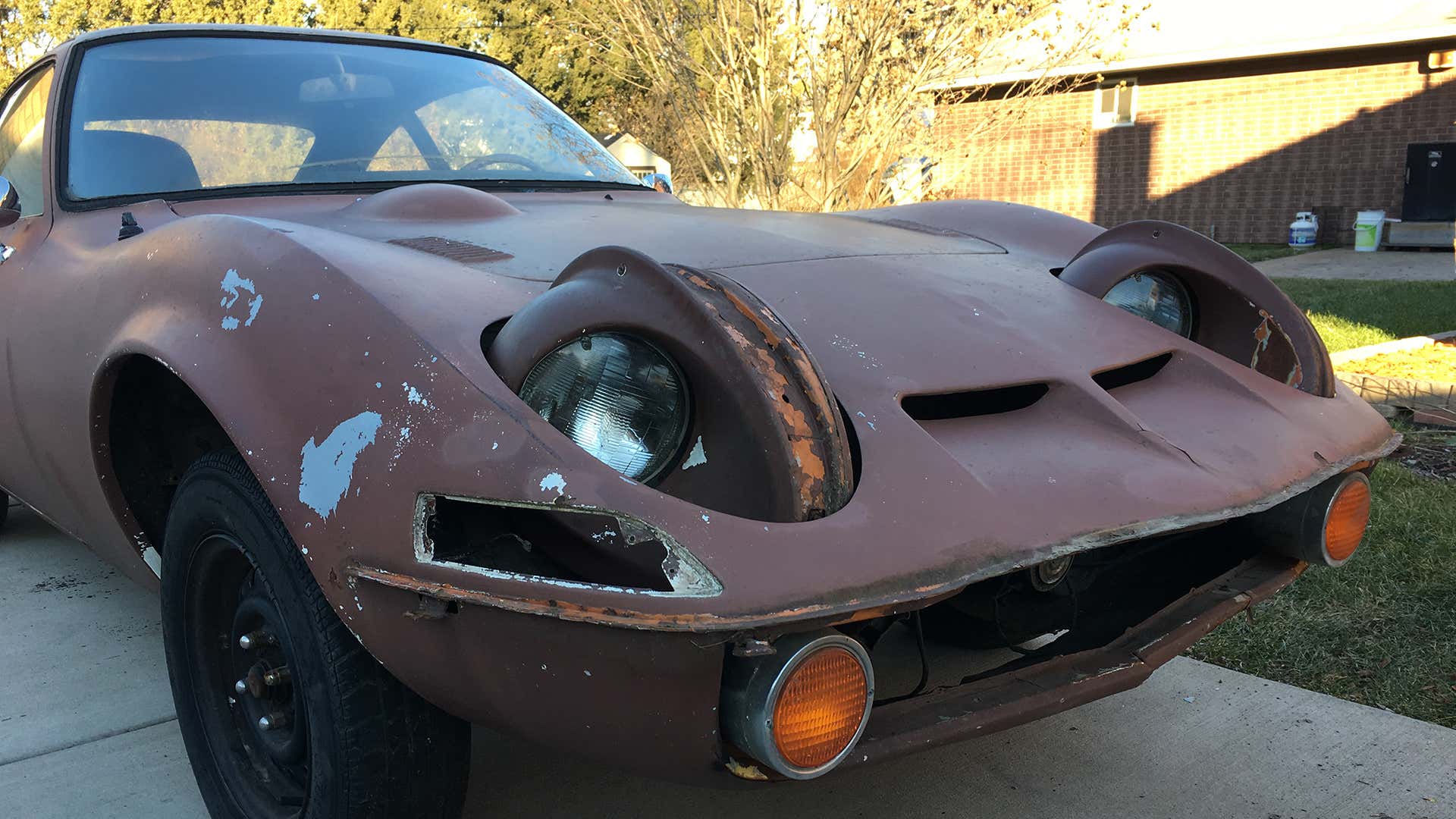 Beyond its gorgeous aesthetic, the Opel GT is most known for its wacky headlights. Although early sketches toyed with the ideas of perfectly circular lights or flat square pop-ups, the GT has egg-shaped lights that are flat and flush with the body when closed and bulbous like frog eyes when open. How they operate is the peculiarity of note, though.

Instead of flip-ups, the GT’s headlights rotate side to side like synchronized rotisseries and hide within the nose like a trap-door bookshelf. Even stranger, the headlights, which automatically turn on when rotated, are actuated by a mechanical lever inside the car. Mine worked, but not all the way.

The lever was not smooth, and the headlights didn’t seem to lock or set into place as I knew they were supposed to. Sometimes, they don’t even come close to closing with the lever, and you have to step outside of the car and move them with your hands. This is something we’ll have to make perfect. It’s the most important part of the GT show. 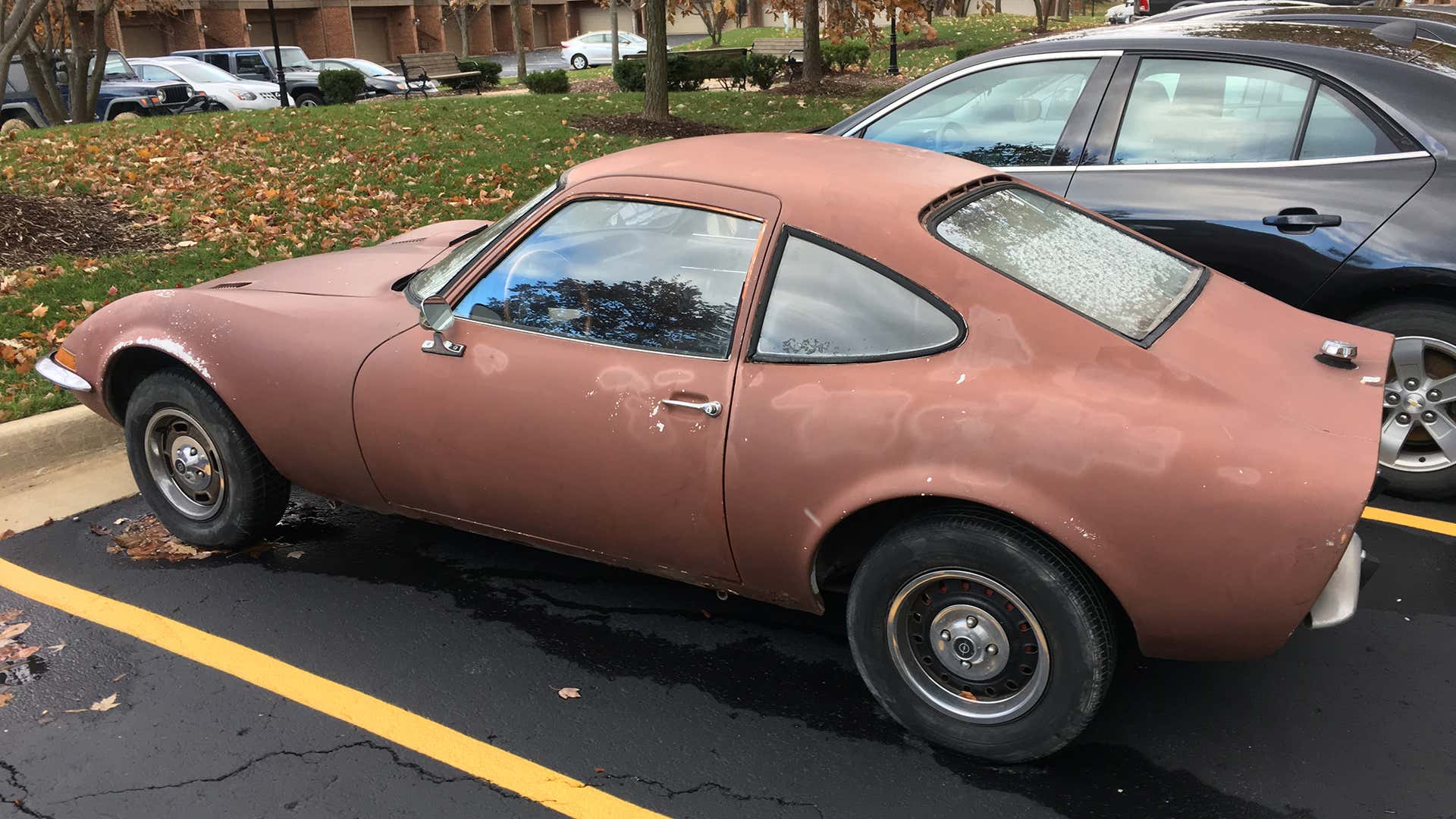 These wheels don’t match as they should.

The Opel GT had three original wheel designs. From 1968-1970, the wheels had a thick cross-like design with four rectangular holes. The 1971-1972 models featured a wheel with 15 small circular holes, and the 1973 example used a wheel that sorta looked like a four-leaf clover with four thin slot holes. Originally, the tires were A78-13, but Opel GT Source says the modern equivalent is 165R13.

My car has three first-gen wheels and one second-gen. The tires around those wheels have some tread left, but the rubber had sidewall dry-rot. I’ll eventually find a fourth wheel to complete the set and add new tires, but we have a lot more important things to fix first. 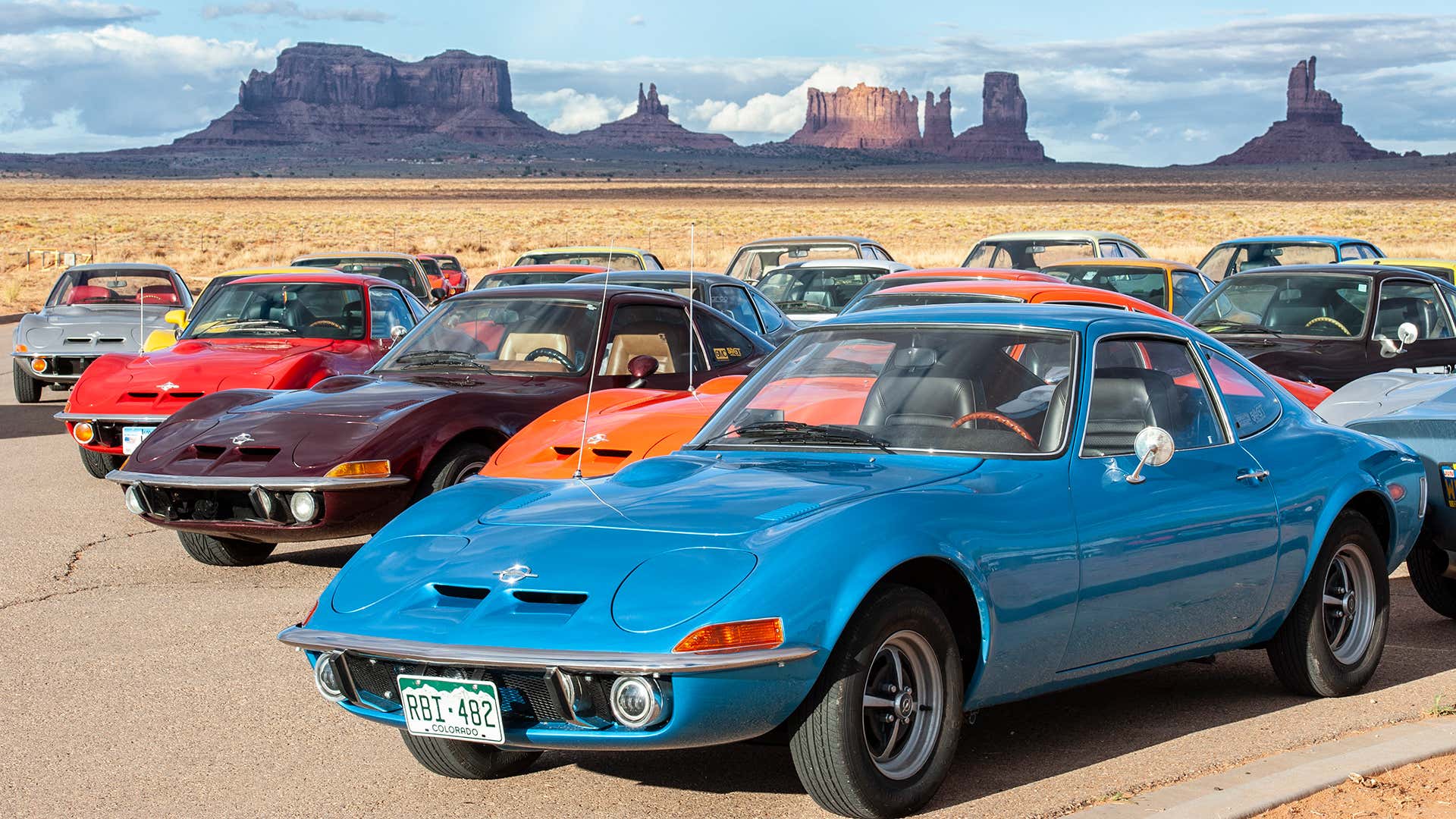 This is how Opel GTs should look.

These are all the issues I was able to identify right from the jump, and I’ve discovered a bunch more since tearing everything apart. The thought of so much work can be overwhelming at times, but having my pops by my side and knowing it won’t be perfect eases the mind. The general plan is to take everything off, clean the body up as much as possible, make the suspension and brakes as close to like-new as we can, and get the engine running again.

As for color, I’m tempted to return it to Rallye glory, but silvery Strato Blue might be my favorite right now.

Let’s Talk, Comment Below To Talk With The Drive’s Editors!

We’re here to be expert guides in everything How-To related. Use us, compliment us, yell at us. Comment below and let’s talk! You can also shout at us on Twitter or Instagram, here are our profiles.