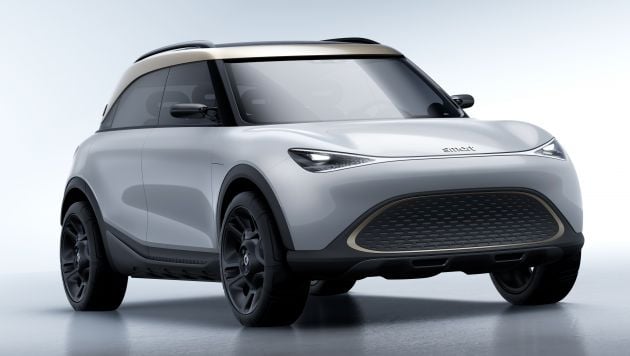 Remember the Smart car? If you don’t it’s OK. If you do, erase the memory of those tiny city cars because there’s a new Smart, under a new owner. In March 2019, Geely became an equal partner in a 50:50 JV with Daimler (now called Mercedes-Benz AG) to develop the Smart brand, and this Concept #1 is the first fruit of the new electric era.

Debuting at the IAA Mobility show in Munich, Germany, the Concept #1 is described as a “clear insight into the first production model in Smart’s new generation of all-electric vehicles”. Yup, minus a bit of showcar bling, what you’re looking at is the first model of Smart’s new era, an electric SUV.

The near-production smart Concept #1 transfers “very compact exterior dimensions” and “traditional Smart design” into “a new vehicle concept with a significantly higher premium and high-tech claim,” the company says. It measures 4,290 mm long and 1,910 mm wide, with a 2,750 mm wheelbase – to give you a picture, that’s longer than a Perodua Ativa but shorter than every B-SUV in our market; however, that wheelbase is 90 mm longer than a CR-V’s. 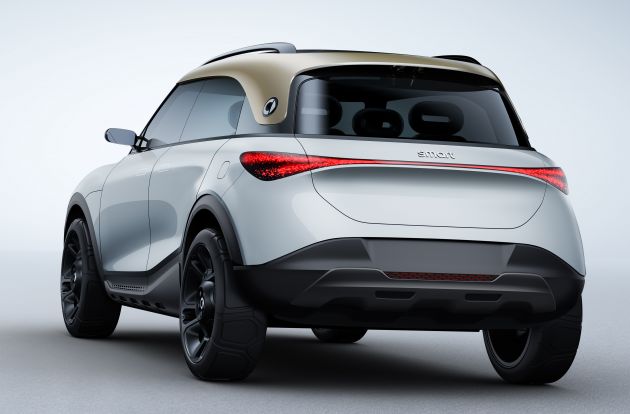 It adds that the Concept #1 is recognisable as a Smart at first glance (can you see it? I can’t) but at the same time has progressive design. “The new sporty Concept #1 is a redefinition of the Smart brand in a very cool grown-up way. We have created a completely new design DNA that has the potential to establish smart as the leading design brand,” says Gorden Wagener, chief design officer at the Daimler Group.

It has a very organic body and a face that reminds this writer of a deep sea creature, but Smart is highlighting the very short overhangs at both ends and the large panoramic glass roof with a ring of light. The seamless transition from the windscreen to the window surfaces of the frameless doors gives a clear floating effect to the roof. The lower body gets the obligatory SUV black bits. Those wheels are 21-inch items – yes 21″ rims on a Smart!

Other cool bits include concealed door handles (which are merely indicated by lighting), and rear doors that are hinged at the back for a “portal door concept” with no B pillars. The LED head- and taillights have striking signatures and “make a significant contribution to the unique and emotional appearance” of the Concept #1. They can perform a rhythmic light show. 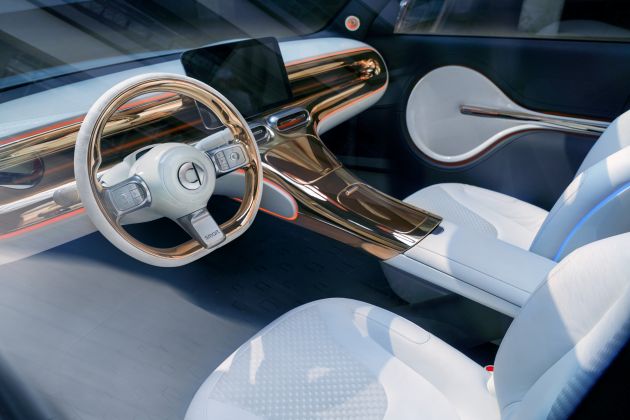 Smart cars are many things, but this is the first time we’re hearing Smart being compared with a business sedan. The carmaker says that despite its compact exterior dimensions, the Concept #1 cabin is very spacious due to the wheels at extreme corners stance. The purpose-designed EV architecture also means that the four-seater concept offers legroom and elbow room on par with vehicles from higher segments as well as plenty of storage space.

Natural light streaming in through the panoramic glass roof further enhances the subjective sense of space and contributes to the interior’s lounge-like atmosphere. Cool details include ambient light integrated into the floor, the elegant air vents, and the centre console, which floats between the front seats and merges seamlessly with the dashboard. It’s devoid of buttons because everything is controlled via the 12.8-inch screen.

A 3D globe serves as the central menu item on the touchscreen. An AI avatar helps the user navigate through the menus and functions. Thanks to artificial intelligence, this virtual companion constantly learns from the user’s behaviour and can adapt to their preferences.

A newly developed smartphone app not only functions as a digital key, but also enables the integration of various connected services and functions into the user’s digital ecosystem. Audio is by Beats.

Smart says that its new model generation has a powerful central computer that controls four main domains: infotainment, driver assistance systems, electromobility-specific functions and the electric/electronic (E/E) vehicle architecture. Thanks to dynamic OTA (over-the-air) software updates, more than 75% of all ECUs can be updated remotely on an ongoing basis, Smart says.

Functions that are named include a parking assistant, an evasive steering assistant, a motorway assistant and an emergency lane assistant. In terms of assistance systems, the next Smart generation will be one of the leading all-electric vehicles in its segment, the company declares.

The mission of Mercedes-Benz and Geely – which founder has a substantial stake in the German company by the way – is to develop Smart into a leading global provider of connected, battery-electric premium vehicles for demanding customer groups, in their own words. Development of the next-gen Smart cars will take place in Geely’s global engineering network, while the exterior and interior design will be handled by Mercedes-Benz. The new Smart – what do you think?