When Tesla first unveiled its fully electric Semi, it was confident it would outperform current diesel-powered trucks. This comes as no surprise since electric cars are known for their strong and instant torque, as well as solid overall performance. According to a new spec analysis by NextBigThing, the Tesla Semi appears to have succeeded.

Based on an article by Teslarati, NextBigThing compiled specs to compare the Tesla Semi to its rivals, and the Tesla hauler tops the performance of both diesel and electric competitors. To be clear, the Tesla Semi wasn’t the first fully electric semi to come to market, but it seems it’s a much better option than its predecessors for most reasons. If it wasn’t, it would likely fail to sell as well as its peers.

Teslarati notes that the Semi’s most clear-cut successes are in its range, charging time, and price. Tesla has always been a leader when it comes to range, and it’s one of the better EV makers for charging time. What may come as a surprise to some people is that the electric hauler’s price with incentives is less than $200,000, and most rivals cost significantly more. Several examples are priced from $300,000 to $500,000.

The Tesla Semi has a maximum electric driving range of over 500 miles. It can charge in 30 minutes to one hour. For comparison, competing models offer from 125 to 330 miles of range and take 1.5 to 4 hours to charge. Check out the NextBigFuture’s chart below: 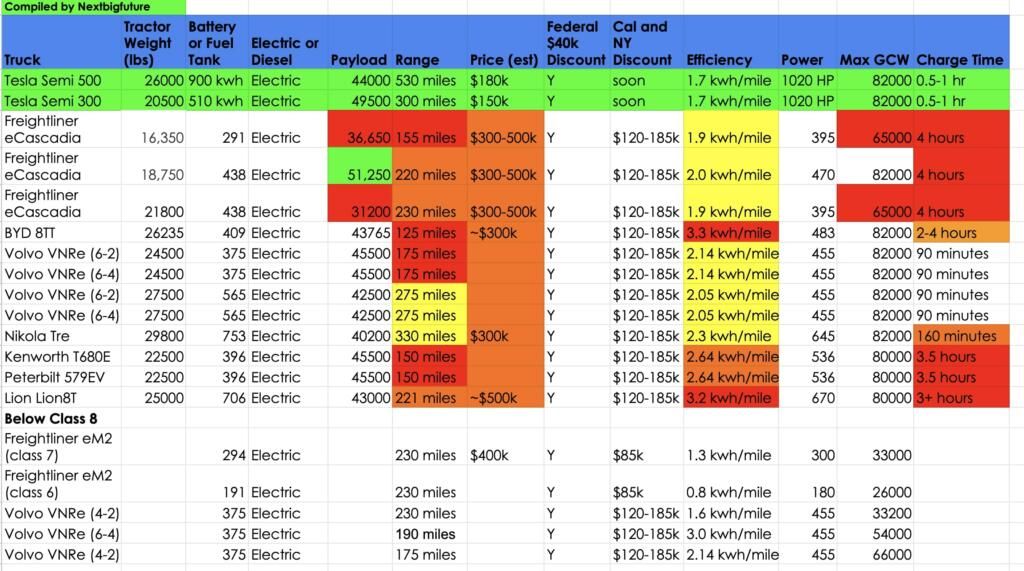 The situation isn’t perfect for Tesla, however. The Semi requires special charging stations that aren’t yet widely available. A lack of Service Centers may also be a temporary concern. Moreover, even though the price is right for the Tesla truck compared to its rivals, it’s still much more expensive than diesel semi-trucks.

What do you think of the Tesla Semi? Do you see it becoming a huge hit among US companies? Share your thoughts with us in the comment section below.