Exactly one year ago, Toyota unveiled more than a dozen electric vehicle concepts, including a pickup truck that looked a lot like an electrified Tacoma.

Needless to say, the electric pickup study attracted a lot of attention, but to this day Toyota hasn’t revealed anything about it. Now, the automaker has unveiled a second electric pickup prototype in Thailand based on its best-selling pickup worldwide, the Hilux.

Not offered in the United States, where the closest thing to it is the Toyota Tacoma, the Hilux is currently in its eighth generation and offers a selection of four- and six-cylinder engines, depending on the market. The production hub for the Hilux is in Thailand, which explains why the Hilux Revo BEV Concept was unveiled in the southeast Asian country—that and the fact Toyota Thailand is celebrating its 60th anniversary.

The Toyota Hilux Revo BEV Concept is clearly based on the ICE Hilux judging from its design, with the only noticeable differences to the diesel-powered model being the closed-off grille and charging port on the front fender.

The single cab pickup looks very much like a pre-production prototype, although Toyota did not reveal a launch date. Present at the event, Toyota CEO Akio Toyoda did provide a timeline for another prototype unveiled at the event, the IMV 0 Concept, which shares design cues with the Compact Cruiser EV first shown a year ago in Tokyo.

The IMV 0 envisions a brand new IMV modular light commercial pickup for Thailand that will be “truly affordable and truly innovative.” The production version is “over a year away,” Toyoda said, adding that it will be a product “that can enhance the quality of life for many people and provide new economic opportunities.”

The automaker did not reveal details about the IMV 0’s powertrain, but its name suggests it’s a zero-emission vehicle. The executive also highlighted the differences between the two pickup concepts.

The all-electric Toyota Hilux concept comes after the automaker announced it had received backing and funding for the UK Government to develop a fuel-cell powered version of the Hilux, previewed by the Hilux H2 Prototype. Speaking of hydrogen, Akio Toyoda reiterated that Toyota does not believe in a full switch to BEVs just yet.

“I believe we need to be realistic about when society will be able to fully adopt Battery Electric Vehicles and when our infrastructure can support them at scale. Because just like the fully autonomous cars that we were all supposed to be driving by now, I think BEV’s are just going to take longer to become mainstream than the media would like us to believe. And frankly, BEV’s are not the only way to achieve the world’s carbon neutrality goals. Personally, I would rather pursue every option not just one options such as emission-free synthetic fuels and hydrogen. I still believe Hydrogen is as promising a technology for our future as BEV.” 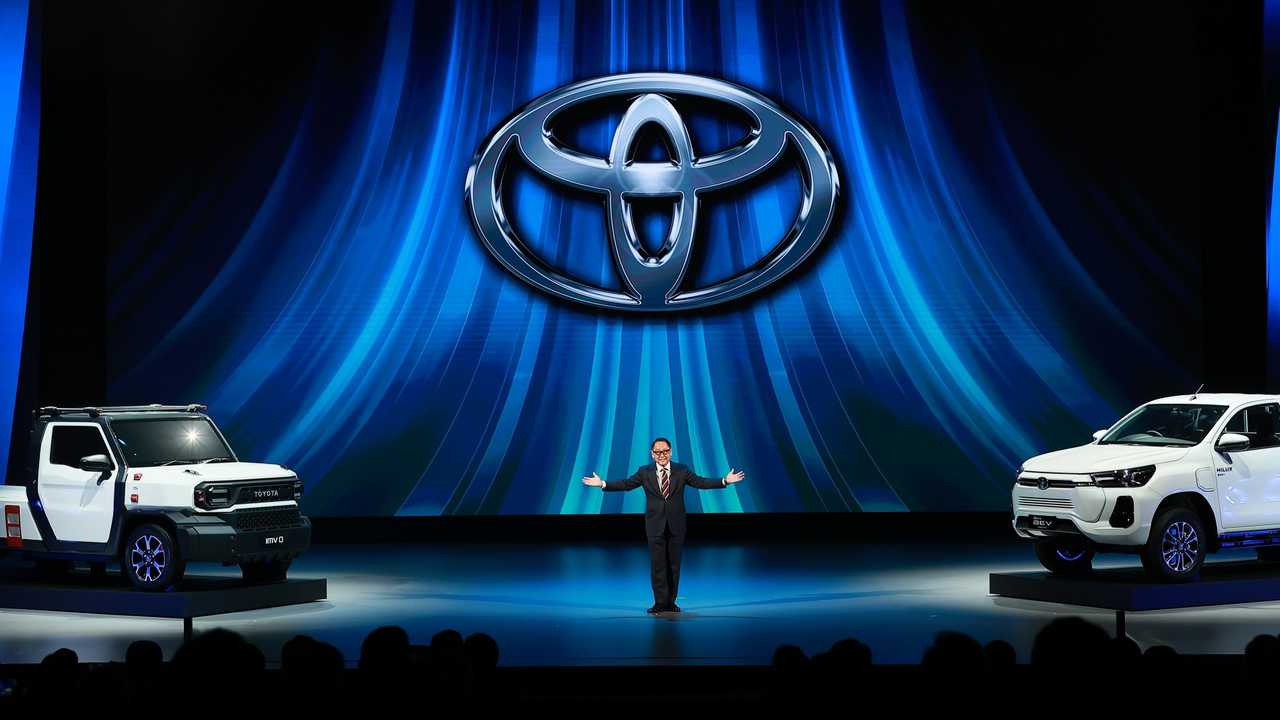