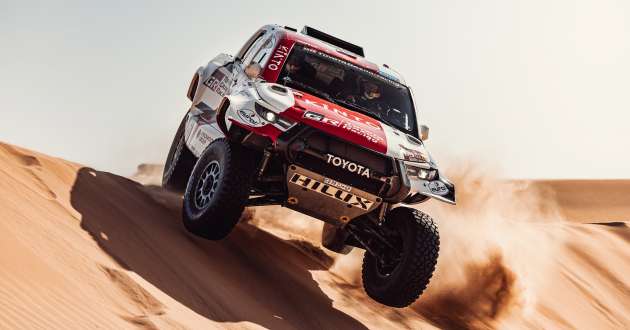 Toyota Gazoo Racing (TGR) claimed its second consecutive victory in the Dakar Rally by winning the 2023 edition of the gruelling rally event, successfully defending the title it won in 2022. First place was secured by Qatar’s Nasser Al-Attiyah and his French co-driver, Mathieu, when they brought their GR DKR Hilux T1+ over the finish line on 15 January.

While the pair did lose time to the winners of the final stage of the event, overall victory was still secured as they ended the rally with a margin of 1 hour 20 minutes and 49 seconds ahead of any competitor.

The final stage of the rally started from the bivouac at Al-Hofuf and saw competitors embark on a journey of 136 km after completing a short liaison of 167 km to the starting line. This was then followed by a final liaison of 100 km to the finish podium in the coastal city of Dammam.

Nasser’s win is the fifth in the Dakar Rally, while Baumel has notched up four victories, and the pair has won three times for Toyota. After taking the lead on the third stage, they never allowed competitors to catch up to them in the time charts.

Two other examples of the GR DKR Hilux T1+ also competed under the TGR banner, with the pair of Giniel de Villiers and Dennis Murphy finishing fourth overall. Meanwhile, Henk Lategan and co-driver Brett Cummings moved as high as second place overall before two setbacks relegated them to a fifth place overall finish.

There was also a privately entered GR DKR Hilux T1+ driven by Lucas Moraes that finished third overall, despite it being the young Brazilian’s first attempt at the Dakar Rally – Timo Gottschalk was his co-driver. The next race is the Abu Dhabi Desert Challenge, which takes place during the last week of February.

“Three GR DKR Hilux T1+ of Toyota Gazoo Racing, two from Team Land Cruiser Toyota Auto Body and Hino Team Sugawara’s Hino 600 all completed the 16-day Dakar Rally. Congratulations to all the six teams on the tough 8,500 km road! Thank you to all the fans for your support!” said Akio Toyoda, president and CEO of Toyota.

“On the long, tough roads of Dakar, it is very hard to win if you don’t have a car that’s not only easy to drive, but also reliable and durable. By continuing to challenge the Dakar, the GR Dakar Hilux T1+ will be refined into an ever-better car. Thank you for training Hilux!” he added.