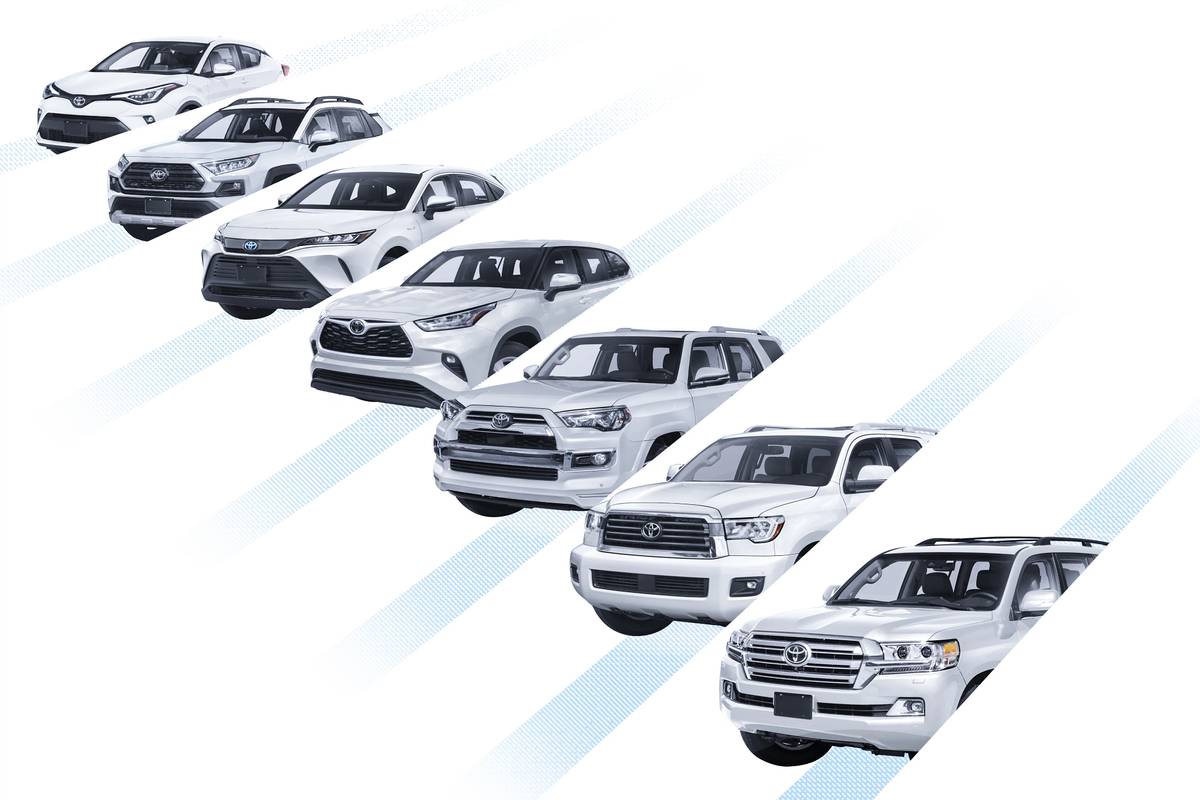 Toyota’s seven-SUV lineup spans from bite-sized to king-sized both in size and price, with a $60,000 difference between the least expensive C-HR and the most expensive Land Cruiser (yes, they still make the Land Cruiser, though not for long). Those ranges mean Toyota has a size and type for just about every lifestyle, whether small and affordable or beefy and capable. And as a brand, Toyota has remained at or near the top of reliability reports, so you can be almost sure that dependability won’t be a worry. In this Toyota SUV buying guide, we’ll walk you through each Toyota SUV and how to choose which one is right for you.

There’s an argument that Toyota’s smallest SUV isn’t really an SUV at all. Sure, it rides high and has a liftgate, but the subcompact C-HR doesn’t offer all-wheel drive like the rest of Toyota’s SUVs. The C-HR is front-wheel drive only, which may be fine enough if you live in an area without snow (or have good snow removal, good tires and flat land) or don’t plan on any off-pavement driving. C-HR is short for “Coupe High-Rider,” and we found it drives spiritedly, as you’d expect from something with a coupe name. It’s on the expensive side of a class that also includes the Hyundai Venue, Kia Soul and Nissan Kicks, though the C-HR does offer generous safety and driver assist technology on all trim levels (LE, XLE, Nightshade, Limited).

What Else You Need to Know About the Toyota CH-R

By far Toyota’s most popular SUV and one of the most popular SUVs out there, the front- or all-wheel-drive RAV4 hits that sweet spot of size and affordability, starting in the mid-$20,000 range and offering heaps of occupant and cargo room for the money; today’s RAV4 is almost as big as the first-generation Highlander. The RAV4 lineup consists of bread-and-butter versions like the LE, XLE and Limited, but there are more adventurous versions including the RAV4 Adventure and ultimate RAV4 TRD Off-Road with a trick rear axle that gives the little ’ute some legit off-road capabilities. What we’ve gravitated toward, however, are the electrified versions, the RAV4 Hybrid and RAV4 Prime plug-in hybrid (EPA-estimated 42-mile electric-only range). In addition to significantly boosting fuel economy, they also address our biggest complaints about the regular RAV4’s driving experience by adding electric assist for a more refined driving experience.

What Else You Need to Know About the Toyota RAV4

Fits three car seats across: No, but it was close

Formerly a funky wagon, the Venza was reimagined for 2021 as a style-focused, high-riding hybrid SUV with room for five. The Venza comes only as a hybrid, versus Toyota’s other hybridized SUVs that have gasoline-only counterparts. The Venza is also only available with all-wheel drive, and it’s a system that uses an electric motor at the rear wheels to create an electrified AWD system — there’s no traditional mechanical connection between the front and rear wheels. Slotted above the five-seat RAV4 and below the seven- or eight-seat Highlander, the Venza offers a decent mix of style and efficiency while being competitive with the Honda Passport, Nissan Murano and Volkswagen Atlas CrossSport.

What Else You Need to Know About the Toyota Venza

Number of seats: Seven or eight

The Highlander is second only to the RAV4 in popularity within Toyota’s SUV lineup. Geared toward families, the front- or all-wheel-drive Highlander comes with three rows standard, seating eight by fitting three passengers each in the second and third rows. Second-row captain’s chairs are also available (standard on XLE and Limited trims) that reduce seating to seven but add cupholders mounted to the floor between the seats. The Highlander comes with a 295-hp V-6 standard, and a four-cylinder hybrid version adds 12-13 mpg combined to the EPA ratings.

Redesigned for 2020, the Highlander greatly improved its ride and handling versus the previous generation, making it more pleasant to drive, and its interior quality was also boosted. What hasn’t changed is the minimal cargo room behind the third row, which remains small for a class that also includes the Volkswagen Atlas, Hyundai Palisade, Kia Telluride and Chevrolet Traverse. The Highlander’s third row itself is also small for adults compared with the larger Sequoia. New for 2021, the Highlander adds a sportier XSE trim level that slots between the XLE and Limited trims with uniquely tuned sport suspension and styling.

What Else You Need to Know About the Toyota Highlander

Number of seats: Five or seven

The 4Runner may look like it overlaps with the Highlander as another mid-size Toyota SUV priced from $30,000-50,000 with up to three rows of seating, but these couldn’t be more different SUVs. The rear- or four-wheel-drive 4Runner is a body-on-frame SUV with ruggedness in its capabilities as well as how it drives; it’s an off-road, old school SUV riding on a truck-based chassis versus the more carlike underpinnings of the Highlander. The 4Runner’s third row with room for two passengers is optional, but it’s an even smaller space than the Highlander’s standard third row and is best for infrequent use, plus it’s harder to get into because the 4Runner sits higher than the Highlander.

One standout feature is an available sliding cargo shelf that makes cargo access easier by allowing the cargo floor to slide out over the bumper. The 4Runner’s adventurous intentions are most apparent in its off-road-focused trim levels including the TRD Off-Road and more serious TRD Pro, the latter of which includes an inch of suspension lift with Fox shock absorbers and TRD-tuned springs. Both off-road versions emply Toyota’s off-road Crawl Control and a locking rear differential.

What Else You Need to Know About the Toyota 4Runner

Number of seats: Seven or eight

The Sequoia is a full-size, three-row SUV that answers the question, “So which Toyota SUV does have room for adults in the third row?” The rear- or four-wheel-drive Sequoia has heaps of space for third-row passengers, unlike Toyota’s other three-row offerings (the Highlander, 4Runner and Land Cruiser). The Sequoia does this through sheer size, being roughly 10 inches longer than the Highlander and Land Cruiser. It’s available in eight-seat configuration with three-passenger bench seats for the second and third rows, or with two captain’s chairs in the second row.

The Sequoia is a body-on-frame SUV and comes with one engine and transmission: a 5.7-liter V-8 with six-speed automatic transmission; unlike the V-8-powered Land Cruiser, the Sequoia doesn’t get the more modern eight-speed automatic. Like the Land Cruiser, however, the Sequoia is in need of an update to better compete with rivals like the Chevrolet Tahoe, Ford Expedition and Nissan Armada that have all been redesigned in recent years (the Sequoia placed last in our most recent full-size SUV comparison). Without modern powertrains, the Sequoia’s fuel economy is poor, with only a 14-15 mpg combined EPA rating.

Fuel economy might not be a deal-breaker, though, for an SUV that can tow up to 7,400 pounds, nor one with an off-road focus in the Sequoia TRD Pro with its beefed-up suspension, BBS wheels and additional underbody skid plates for off-road protection.

Number of seats: Five or eight

There may not be two SUVs in any lineup more disparate than the $87,000 Land Cruiser and $22,000 CH-R, but the 2021 model year is the last for Toyota’s behemoth Land Cruiser. While its intentions are as a luxury SUV with go-anywhere capabilities, in reality, the AWD Land Cruiser is dated and lacks many of the driver assist and electrification strategies employed in other more modern Toyotas.

At its $87,000 starting price, the three-row, eight-seat Land Cruiser comes with just about everything the model offers except the optional rear entertainment system.The Heritage Edition comes with two rows and seating for five as standard, though the third row is an option. The Land Cruiser still stands out as a highly capable off-road SUV, however, with a sophisticated double wishbone front and multilink rear suspension setup, active anti-sway bars and a full-time AWD system that includes a Torsen limited-slip center differential and two-speed transfer case with selectable low range. There are also numerous off-road driving assists like Crawl Control and an off-road turn assist. Finally, it’s the Toyota SUV with the highest towing capacity at 8,100 pounds, versus the next-highest Sequoia at 7,400 pounds.

What Else You Need to Know About the Toyota Land Cruiser

Cargo Room Behind Backseat (Base Trim, Biggest to Smallest)