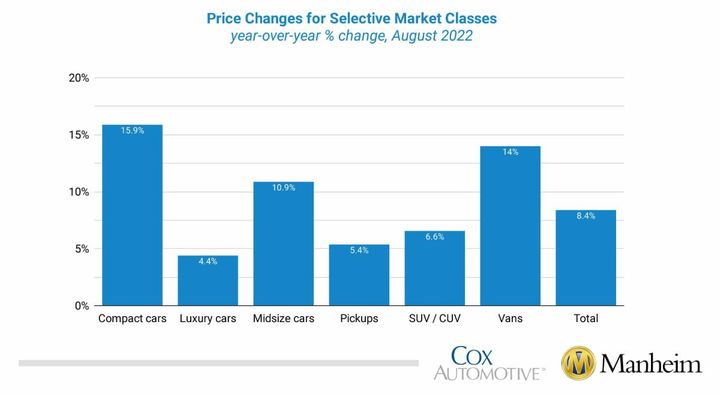 All major market segments saw seasonally adjusted prices that were higher year over year in August, except for full-size cars.

Wholesale used-vehicle prices (on a mix, mileage, and seasonally adjusted basis) decreased 4% in August from July, according to the Manheim Used Vehicle Value Index released Sept. 8.

The index declined to 210.8 but is up 8.4% from a year ago. The non-adjusted price change in August declined 2.6% compared to July, leaving the unadjusted average price up 5.9% year over year.

In August, Manheim Market Report (MMR) values saw larger-than-normal declines that were consistent over the month. During the last four weeks, the Three-Year-Old Index decreased a net 2.5%. In August, daily MMR Retention, which is the average difference in price relative to current MMR, averaged 98.3%, meaning market prices were below MMR values. The average daily sales conversion rate increased to 50.5%, which was below normal for the time of year. For example, the sales conversion rate averaged 56.4% in August 2019. The lower conversion rate indicated that the month saw buyers with more bargaining power for the time of year.

All major market segments saw seasonally adjusted prices that were higher year over year in August, except for full-size cars. Compact cars had the largest increase at 15.9%, followed by vans and midsize cars, which all had seasonally adjusted year-over-year gains ahead of the overall industry. Compared to July, all eight major segments’ performance was down. Sports cars lost nearly 5%, while compact and midsize cars declined 3.5% and 3%, respectively. SUVs were down 4.3%, and vans were down 2.9%.

August’s total new-light-vehicle sales were up 3.2% year over year, with one more selling day than August 2021. By volume, August new-vehicle sales were essentially unchanged from July. The August SAAR came in at 13.2 million, a 0.7% increase from last year’s 13.1 million but down 1.1% from July’s 13.3 million pace.

Fleet Sales Up 15% YOY in August

Sales into rental were down 18% year over year, while sales into commercial fleets were up 37% and sales into government fleets were up 28%. Including an estimate for fleet deliveries into dealer and manufacturer channels, the remaining retail sales were estimated to be up 3.7%, leading to an estimated retail SAAR of 11.5 million, down 0.2 million from last month’s pace, or 1.3%, but up 0.1 million from last year, or 1%. The fleet share of 12.4% held steady in August from July but was down from last August’s 12.8%.

The Conference Board Consumer Confidence Index increased 8.3% in August when a smaller increase had been expected, but the July index was also slightly revised down. Both underlying measures of present situation and expectations saw strong gains. Plans to purchase a vehicle in the next six months increased slightly but remained down year over year.

The Consumer Sentiment Index from the University of Michigan also saw strong gains in August. The Michigan index rose 13% as gains extended from a record low in June. Similarly, the Morning Consult Index of Consumer Sentiment saw accelerating gains in August. That index increased 4.6% in August after rising 3.3% in July. The declining average price for gasoline has lifted consumer attitudes although stock market volatility returned in August. The average price for unleaded gasoline nationally was $3.83 at the end of August, representing a nearly 24% decline from its peak of $5.02 in June.