A startup called ZipCharge is using this week’s COP26 climate summit in Glasgow, Scotland, to unveil a portable EV charger that can be wheeled around like a briefcase. Called the Go, the charger is basically a battery on wheels, one that can give an EV up to 40 miles of range, offering a versatile way to get a range boost when needed or to hedge against running out of juice on longer EV trips. The unit will be offered in 4- and 8-kWh forms, with the smaller capacity offering up to 20 miles of range.

The procedures for the ZipCharge Go are pretty intuitive: The unit needs to be charged in a wall outlet indoors, and then can be wheeled out like a piece of luggage to charge an EV via a standard connector, or it can be placed in the car’s trunk and saved for later, when needed. ZipCharge says that the 4-kWh Go needs a little over 30 minutes to give an EV about 20 miles of range, and double that time for the 8-kWh unit. So it’s not blazing-fast as far as charging speeds go, moving that juice at 7.2-kW speeds, but rather meant to maximize portability and energy density.

The battery of the unit itself lithium-ion, and it also features a bi-directional AC-DC inverter that allows for charging from the unit to the grid, storing energy that can be used during peak hours.

“Our technical approach to engineering the Go as a lightweight, compact, and safe charging solution, and then evolving that into an EV charging platform reflects our intention to combine the development of battery-based systems with the lowest future environmental impact possible,” said ZipCharge co-founder Richie Sibal. 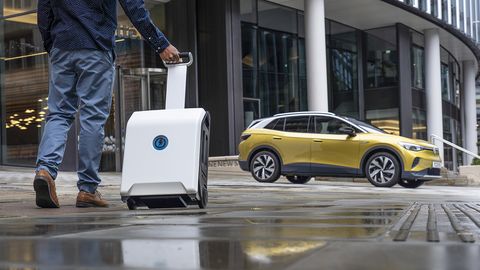 The Go also features a communications module for over-the-air updates and remote diagnostics, as well as tracking and geo-fencing for security. The unit is housed in an aluminum spaceframe for stiffness and lightness, as the battery itself is… not light, as you can imagine.

More than just offering a safety cushion for longer trips, the ZipCharge Go is meant to give city dwellers a way to recharge their EVs if they don’t have access to curbside charging, which is not particularly widespread in any country at the moment. It should also give EV users who don’t have reliable parking at a charging spot every night—or are traveling to an area with few chargers—a way to recharge their cars. 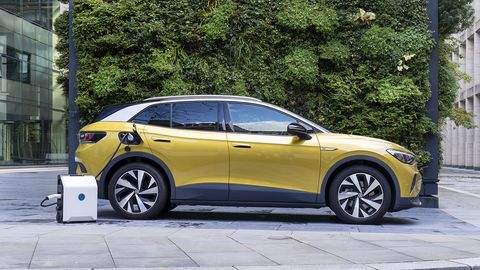 “We’re delighted to be launching the Go at COP26, it’s the perfect place to introduce ZipCharge to the world,” said ZipCharge co-founder Jonathan Carrier. “In light of the (UK) government’s recent Net Zero Strategy: Build Back Greener manifesto announcement, never before has the automotive industry had cause to innovate so rapidly to help us reach a low carbon future. One of the key barriers to wider uptake of EVs is charging anxiety; the inability to charge near or at home. ZipCharge removes that hurdle and in doing so, will democratize EV ownership.”

Production of this mobile charger is set to begin close to the end of next year, with prices and availability to be announced closer to launch. As an alternative to towing a trailer with a gas-engined generator, this suitcase-sized battery seems like it will be a useful accessory for EV drivers not facing an abundance of EV charger locations in their area.