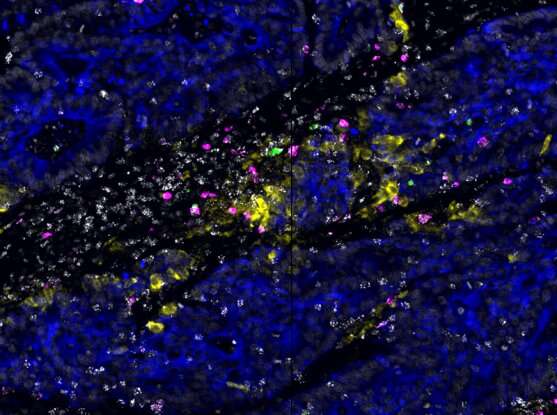 A tumor in the human body is like a city at war, bustling with cancer cells, immune cells, blood vessels, signaling molecules and surrounding tissue. A simple census of these players will provide some basic information on their battle, but won’t tell you their organization or strategy.

A team of researchers has gained new insight into this organization. They have discovered that immune cells in some human colorectal tumors gather together in clusters, like soldiers mobilizing in formation. By using a unique combination of single-cell profiling and imaging technologies, along with newly developed data analysis approaches, the scientists found a level of spatial organization of cells not observed before in tumors.

The findings, published in Cell, point to networks of interacting immune cells in certain types of colorectal tumors that tend to be more readily “seen” by the immune system. This suggests that cancers containing these hubs may be more likely to respond to cancer drugs called immunotherapies, which spur the immune system to kill cancer cells. The scientists, from the Broad Institute of MIT and Harvard, Massachusetts General Hospital, MIT, the Evergrande Center for Immunologic Diseases at Brigham and Women’s Hospital and Harvard Medical School, and Dana-Farber Cancer Institute, say the study could shed light on how to make other tumors more responsive to such treatments.

“By analyzing the activities of each cell in the tumor, we were able to listen in to the dialogue between cells and discern an organization that was previously invisible to us,” said Nir Hacohen, co-senior author of the study, co-director of the Broad Institute’s Cell Circuits Program, director of the Center for Cancer Immunology at Massachusetts General Hospital, and a professor at Harvard Medical School.

Other co-senior authors are Ana Anderson, institute member at Broad, an associate professor at Harvard Medical School, a scientist at Brigham and Women’s Hospital, and a core faculty member of the Evergrande Center for Immunologic Diseases; Aviv Regev, who was a core institute member at Broad when the study began; and Orit Rozenblatt-Rosen, who was senior director of single cell genomics at the Klarman Cell Observatory at Broad during the study.

At a genetic and molecular level, colorectal cancers can be divided into two types. Mismatch repair deficient (MMRd) tumors don’t properly repair errors in their DNA that occur when cells divide, leading to an accumulation of mutations in cancer cells. These tumors often respond to new immunotherapies. Mismatch repair proficient (MMRp) tumors, on the other hand, don’t accumulate as many mutations and don’t respond as well to existing immunotherapies.

Postdoctoral fellows Karin Pelka, Matan Hofree, and Jonathan Chen, co-first authors of the new study and members of the Regev and Hacohen labs, wanted to probe the differences between immune cell function in MMRd and MMRp tumors. In collaboration with physicians at multiple hospitals across Boston and immunologists at the Evergrande Center, the researchers collected 34 MMRd and 29 MMRp colorectal tumors from patients who hadn’t yet received any treatments. Using cloud computing capabilities at the Broad, the team analyzed nearly 400,000 cells from these tumors, profiling them using single cell RNA sequencing, which allowed them to determine which genes were being expressed in each individual cell.

“Complex systems such as tumors require a network of researchers with different expertise to take on the challenge of studying their cellular organization,” Anderson said. “Working with a collaborative team across multiple institutions is what allowed us to undertake this unique study and reach a new view of how immune cells are organized in tumors.”

Previously, researchers have used this kind of data to cluster cells into discrete categories and then described gene expression patterns of each cell type. Hacohen, Regev, Pelka, Hofree, and Chen, however, developed a new set of data analysis approaches to study more nuanced programs of gene activity and how the programs in different cells are connected to and coordinated with each other.

Using these new analytical tools, the team discovered that specific gene programs and cell types were present only in the MMRd tumors, which are more responsive to immunotherapy. Moreover, only certain subsets of the MMRd tumors showed cellular activity and gene programs that are associated with anti-tumor immunity.

The scientists then searched for gene programs that are coordinated with each other across disparate cell types—when the expression of one gene program went up or down, another program would also change in concert.

“We realized that understanding the individual parts of the tumors and the cell types doesn’t tell us the whole story,” Pelka said. “We need to understand what each cell is doing and how the cells work together with each other to accomplish their tasks.”

The analysis revealed that malignant tumor cells and two types of immune cells—T cells and myeloid cells—were likely interacting with each other and turning on specific gene programs. To see how the cells expressing these gene programs might be organized inside tumors, the team analyzed tumor samples from patients under the microscope, focusing on interactions between the T cells with the coordinated gene programs and the cancer cells. This allowed them to zero in on the clustered hubs of immune cells deep inside tumors.

The scientists also noticed a higher occurrence of the hubs in MMRd tumors (which respond better to immunotherapies) compared to MMRp tumors. They hypothesize that the hubs might be involved in how tumors respond to treatment.

“It was striking to find that some of the strongest interaction signals we predicted with our computational analysis were indeed observable as spatially organized hubs of cells,” Hofree said.

“It turns out that the immunology of these tumors is quite organized rather than being diffuse throughout,” Chen said. “Particularly when we looked at MMRd tumors, there were these clear structures containing the active immune cells.”