When I asked my partner to take pictures throughout my labour and birth, I had no idea how much they would reflect how lonely I felt.

Loneliness caused by the pain, nexium and decreased calcium absorption the waiting around and the frustration of asking for the same things over and over again.

I was desperate to not ‘seem difficult’ as I was painfully aware of the midwife crisis, but at the same time desperate for pain relief that took nearly eight hours to arrive.

The whole time, I felt guilty for taking up valuable NHS resources with my desire to birth a child, as I was surrounded by exhausted midwives who were stretched to their limits.

A report by the Royal College of Midwives (RCM), found that 57% of midwives are considering leaving in the next year, with eight out of 10 concerned about understaffing. Two-thirds of midwives were not satisfied by the care that they were delivering so the outlook for this profession is a tough one, something I would come to understand.

It was my first child and he was one week overdue. At this point, I was excited to give birth and I didn’t really have any concerns beyond whether I would need to be induced to start labour or not.

Thankfully, on a Wednesday evening in September, my contractions started so I ate beans on toast and watched Birdbox, without realising that I faced the most agonising pain of my life in just a few hours. I went to bed at midnight and woke up just two hours later with back spasms that were a minute and a half apart.

At 4am, I tried the maternity unit triage phone line for two hours, eventually getting through and arriving at the hospital at 7:30, just as the new shifts were starting. I chose the hospital as it is modern, with a great reputation and known for its excellent care.

The nurse on triage wasn’t convinced that I was far enough into labour, as I was only 1cm dilated despite being in agony with bizarre back spasms. She offered me a ‘sweep’, which is where they use their fingers to remove the membranes from your cervix to speed it up. I went to the toilet afterwards and water started to leak out of me onto the floor.

The midwife claimed that she hadn’t broken my waters as they pooled around my feet and sent me home to take a bath. I sat in the bath for just minutes as I was in too much pain. I then had a bleed and we had to return to triage just three hours later at midday.

They agreed that my waters had been broken and decided to admit me. 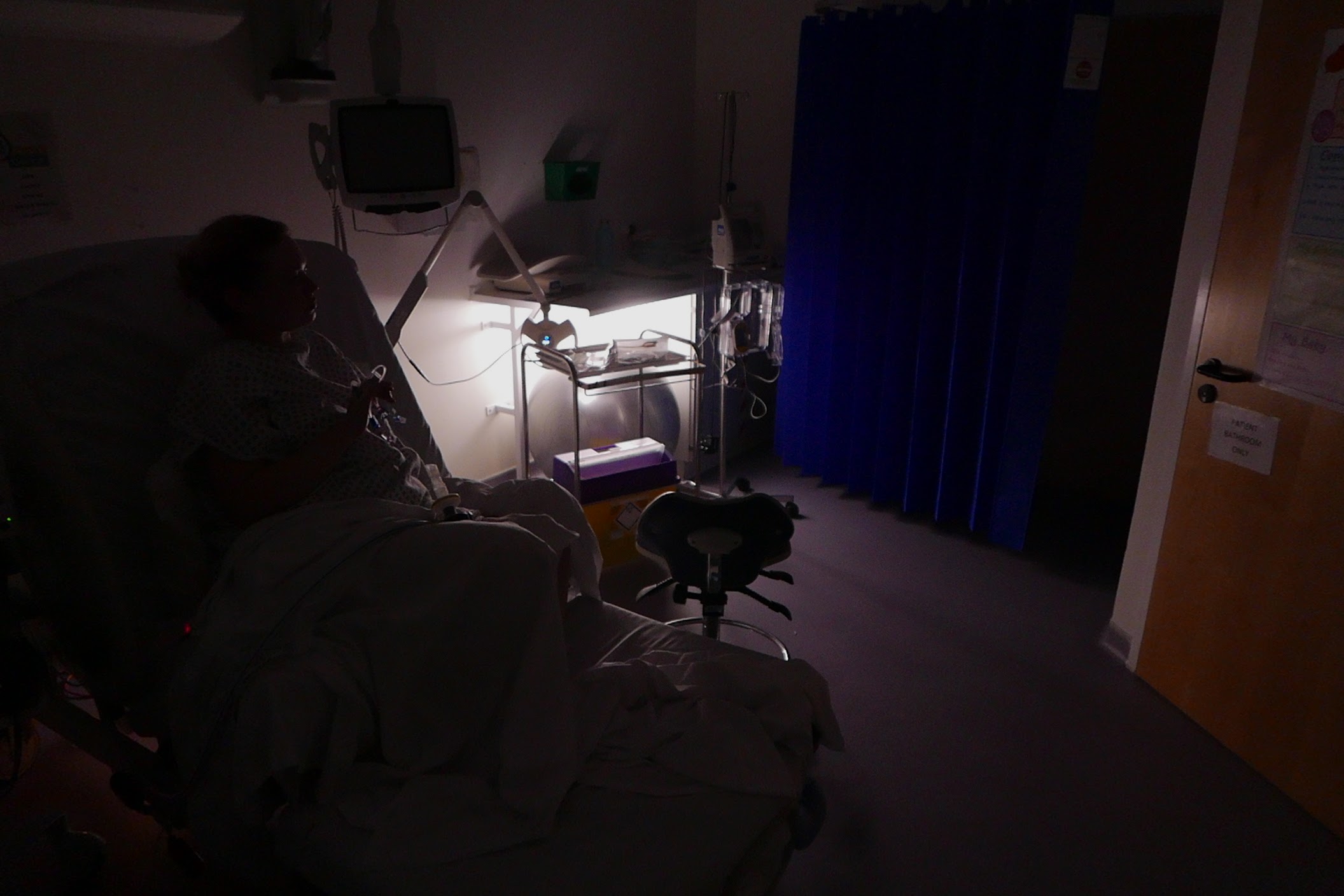 We were stuck in a room in triage for three hours with no pain relief except a dodgy gas and air tap that didn’t work properly. It turned out that it was a back labour (the baby’s back was against my back) that was responsible for the agonising spasms on top of my contractions.

Finally, a delivery room and midwife became available at 4:40pm and I was relieved that I could get some pain relief. I’ve written articles about back labour since and the intensity of the pain can only really be managed by an epidural, and nothing else works. However, due to an influx of emergency C-sections, I didn’t get the epidural fitted until 9:30pm.

It was seven and a half hours after I was admitted and I’d been crying in pain for most of them.

After having the epidural, the night was pain-free and I slept a little but the midwives had to regularly wake me to do their checks to ensure it was still working.

In the end, they raised concerns about the baby as he kept moving around, which made him difficult to monitor. The doctors decided to try to get him out at 8am otherwise I would need to go to theatre for an emergency caesarean.

Despite everything, the actual birth of my son at 08:30am was the best experience of my life. My partner was allowed to be there but they wouldn’t test him for Covid-19 so he had to keep his mask on throughout.

It was a forceps birth due to his position but the room was full of people ready to help get him out and they made me feel like the queen of the universe. Pulling a baby out is a real high and you could tell from the atmosphere in the room that everyone – the three doctors, three midwives and two medical students that were pulled in off the corridor – felt it, especially as they cheered as he arrived.

What really brought us down to earth was the bleakness of the postnatal ward. A dad was shouting at the midwives about the pharmacy taking too long and saying the heat of the ward was giving him anxiety, a bold stance to take in a room full of bleeding women with wounds to their stomachs and vaginas.

Again, I was left on my own for hours and it was incredibly lonely. Partners were only allowed in the ward during visiting hours and other visitors were not allowed due to Covid-19.

Breastfeeding was going terribly and the midwives were too busy to help or would promise to return only to come back four hours later. I asked for the breast pump, which came but was taken away after two hours.

When I asked if I could keep it for longer, the midwife snapped and said ‘that’s the way it is’.

I was one of the few on my ward who was mobile, so I walked to the break room to get coffee. The short stroll was a grim reality check as all the private wards were dedicated to mothers with Covid-19.

While I chose to have both doses of the vaccine during my pregnancy, the messaging from the Government for expectant mothers has been so confusing that I’m not surprised uptake was so low then. It still is now.

Unsurprisingly, I begged my boyfriend to get me discharged as soon as he arrived the next day. I was in the hospital for two and a half days and I met some incredibly kind midwives, but people were tired.

There was a revolving door of people needing equipment from my delivery suite as there wasn’t enough to go around and we had to wait hours for every single thing.

On Saturday, I gave my baby some formula just so I could get out of there. After that, we waited for four hours before they could do the checks that we needed to be able to leave.

My experience is not unique, and there are sadly much worse stories out there.

As a journalist, I’ve heard far more negative stories than positive from people who have opened up to me and not being treated well, poor breastfeeding support, being left alone for hours, or delayed pain relief.

It’s easy for a woman’s experience to be written off, both in terms of birth and being a midwife, but the more we accept poor care and understaffing as the norm, the worse it gets for everyone.

In reality, there needs to be a lot more midwives, lactation consultants, anaesthetists, doctors, pharmacy staff and money to buy equipment that they need, like breast pumps and thermometers.

With better training and less pressures, the experience will naturally improve as ultimately, babies are fascinating and they bring joy, which is the reason many get into the profession.

Mothers, babies and birthing parents deserve much better, but so do the people that their lives depend on.

In this exciting new series from Metro.co.uk, What It Feels Like… not only shares one person’s moving story, but also the details and emotions entwined within it, to allow readers a true insight into their life changing experience.