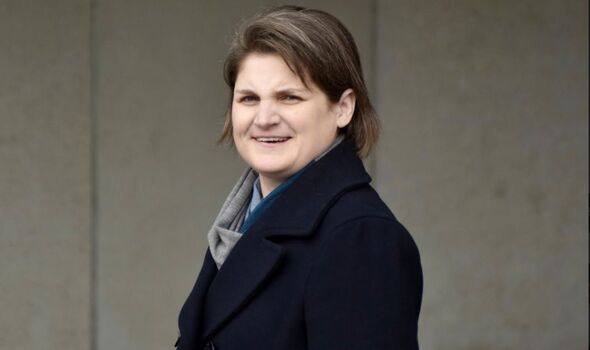 A nurse who was forced to resign because smokers at the entrance to the hospital where she worked kept aggravating her asthma has slammed the NHS for failing to enforce the ban.

Olivia Fulton has called on NHS bosses and the police to apply the law after it was made illegal on September 5 this year to smoke within 15 metres of a hospital building in Scotland.

Fines for the offence range from a £50 fixed penalty notice to a fine of up to £1,000 should it end up in court.

The charity Asthma + Lung UK is supporting the 36-year-old.

She has a severe form of asthma, metformin se and one of the triggers is smoke.

Olivia told The Daily Record: “I worked at Edinburgh Royal Infirmary as a renal nurse but one of the biggest issues I had was getting into hospital safely.

“Sometimes I would end up in A&E.”

She told how she was admitted for asthma treatment at the infirmary but was triggered again by smoke coming in an open window, leaving her critically ill.

She added: “It was summer and the windows were open and someone was smoking outside.

“I ended up in critical care because I had an asthma attack with it. It was ridiculous.”

Speaking of her decision to quit, Olivia said: “I felt I was banging my head against a brick wall because no one was seeing it from the other side.

“I have had several potentially life-threatening asthma attacks just trying to get into work or trying to get well within hospital.”

Olivia said the law brought in earlier this year was “fantastic but it has not changed anything” and came too late to save her job which she quit five years ago.

Smoking still causes her problems when she attends hospitals. She had to go to St John’s in Livingston for treatment to an unrelated stomach issue.

She said: “The no-smoking signage was at the doors but all these people were standing smoking, about four or five clusters – there was even one employee there.

“It’s not just against the law to smoke there but for hospitals to knowingly allow people to do it.

“I thought when it (the law) was introduced in September it was because there wasn’t much advertising but I thought by now, three months down the line, there would have been an improvement.”

Olivia pointed out to one of the smokers at St John’s that they were breaking the law.

She said: “He told me to f*** off. There just seems to be no way of enforcing it. I had so much hope for this ban but nothing has changed.”

The law means anyone smoking within 15 metres of a hospital building could face a fixed penalty notice of £50 or a fine of up to £1000 if the case goes to court.

Smoking remains the leading cause of preventable illness and death, and people who breathe in second-hand smoke regularly are more likely to get the same diseases as smokers.

Joseph Carter, head of Asthma + Lung UK Scotland, said: “For people with lung conditions, who often spend a lot of their time in and out of hospital, having to inhale smoke can be a trigger for a serious attack or flare-up.

“We can all play our part in reducing the risks of second-hand smoke, and with one in five people in Scotland having a lung condition, it is vital that hospitals communicate a clear message … that smoking is completely unacceptable within close proximity of hospitals.”

Labour’s health spokeswoman Jackie Baillie said: “It is good we do not have smoking in hospital grounds but it needs to be enforced and this is something, alongside managing traffic and parking we would expect hospitals to do.”

A Scottish Government spokesman said: “Everyone knows that smoking is bad for our health and hospital patients in particular should be protected from the harmful effects of second-hand smoke.

“This new law is the latest step in our bold plan to make Scotland tobacco-free by 2034 – building on our dedicated stop-smoking services and early intervention measures to stop youngsters picking up the habit altogether.”

Designated officers of local authorities – in most instances Environmental Health Officers – have been tasked with enforcing the perimeter ban.

They are required to work with hospitals on local awareness raising and education initiatives to encourage individuals not to smoke near hospital buildings.

The government spokesman added: “Designated officers are asked to follow the four E’s principle of Engage, Educate, Encourage and Enforce.

“Enforcement – via the imposition of fixed penalties or fines – is the last stage in this approach.

“If staff don’t feel comfortable approaching someone smoking, they should let the person responsible for logging complaints know that someone is smoking in the perimeter area.”