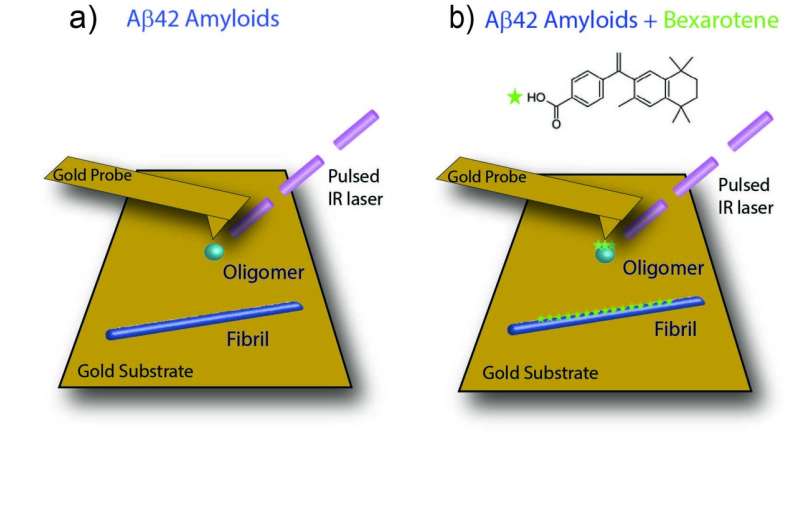 Understanding how certain chemicals interact with molecular processes in our body is key to developing effective medications. This certainly holds true for complex neurodegenerative diseases, such as Alzheimer’s and Parkinson’s, for which no effective treatment is available as of yet. Scientists from Wageningen University and Cambridge University have come one step closer. They managed to study—at the molecular level—the interaction between an FDA-approved drug and protein aggregates involved in the onset of Alzheimer’s disease. Their results are published in Nature Communications.

“The onset of Alzheimer’s disease is closely related to the misfolding and then aggregation of a peptide called amyloid-beta in a patient’s brain,” says Francesco Simone Ruggeri, assistant professor of Organic Chemistry and Physical Chemistry at Wageningen University and lead author of the study. “Over the past two decades, significant efforts have been devoted to developing compounds that can interfere with this aggregation. However, we still don’t have a drug for clinical use. One of the main reasons is that we don’t fully understand how drugs and small molecules interact with specific amyloid species involved in cellular toxicity.”

Ruggeri and his Cambridge colleagues took a new approach to elucidate these interactions. They combined atomic force microscopy—an advanced imaging technique that allows for the study of single molecules at the nanoscale—with infrared spectroscopy, which sheds light on chemical properties of biomolecules. Their combination, called infrared nanospectroscopy, uses cytotec tablet offers the best of both worlds, allowing for chemical and structural characterisation at the nanoscale.

The scientists use this approach to study how the small molecule bexarotene interacts with aggregates of the Alzheimer’s amyloid-beta peptide. “In an earlier study, my Cambridge colleagues had already proven that bexarotene prevents the aggregation in vitro, and reverses its neurotoxicity in cell and animal models of Alzheimer’s disease,” says Ruggeri. “And last year, I was able to show that this combined infrared nanospectroscopy technique can reach single-molecule sensitivity. Now it was time to combine the two findings. It was the first time anyone used this approach to study any drug-target interaction at the single molecule level. Until now, this has been the limiting factor in studying how a medication acts on these peptide aggregates.”

It turned out that a specific part of the bexarotene molecule—its carbonyl group—is responsible for its interaction with the aggregates through a single hydrogen bond. “It is this kind of information that is useful for pharmaceutical purposes,” explains Ruggeri. “If you know which part of a molecule is responsible for its chemical activity, you can look for ways to optimize the compound and develop successful pharmaceutical approaches to delay or cure neurodegenerative disorders.”

Protein aggregates, such as those in Alzheimer’s disease, are very heterogeneous and transient in nature. Some of the misfolded aggregated species are toxic, while others might be protective. “Hence we want drugs to target only specific species or pathways,” emphasizes the chemical scientist. “Any pharmaceutical approach should aim for optimized functionality. To do that, you need to understand how this works, which are the important parts of the molecules, and what helps or delays their action.”