National hell service: Nearly 1,000 patients a DAY wait 12-plus hours in A&E, ambulances take an HOUR to respond to heart attacks and 10,000 ‘urgent’ cancer referrals are not seen within three MONTHS

England’s emergency department performance plummeted to its worst ever level last month, with nearly 1,000 patients a day forced to wait more than 12 hours.

Latest NHS data shows that more than 29,000 sickened people queued for half a day, often in pain, at A&E units last month — four times more than the NHS target and up by a third on June, which was the previous record.

Meanwhile, the proportion of patients seen within four hours — the timeframe 95 per cent of people are supposed to be seen within — dropped to 71 per cent last month, the lowest rate logged since records began in 2010.

Separate ambulance figures show the average wait for heart attack and stroke victims surpassed 59 minutes for only the second time ever. And waits for the most serious 999 calls hit a record high of nine-and-a-half minutes.

The NHS blames the crisis on so-called bed blockers — healthy people that can’t be discharged from hospitals due to a lack of social care staff — along with record calls from people with life-threatening illnesses and injuries.

Meanwhile, the number of people in England on the waiting list for routine hospital treatment hit a record 6.7million in June — meaning one in eight are now stuck in the backlog.

The NHS this week bragged that it had ‘virtually eliminated’ two-year waits, with 3,800 in the queue by the end of June. Health bosses say the vast majority have either chosen to delay treatment or are complex cases.

It comes as health service data leaked yesterday revealed that more than 10,000 people were waiting three months or more to start cancer treatment by the end of July. Medics warned thousands will die unnecessarily because of the disruption. 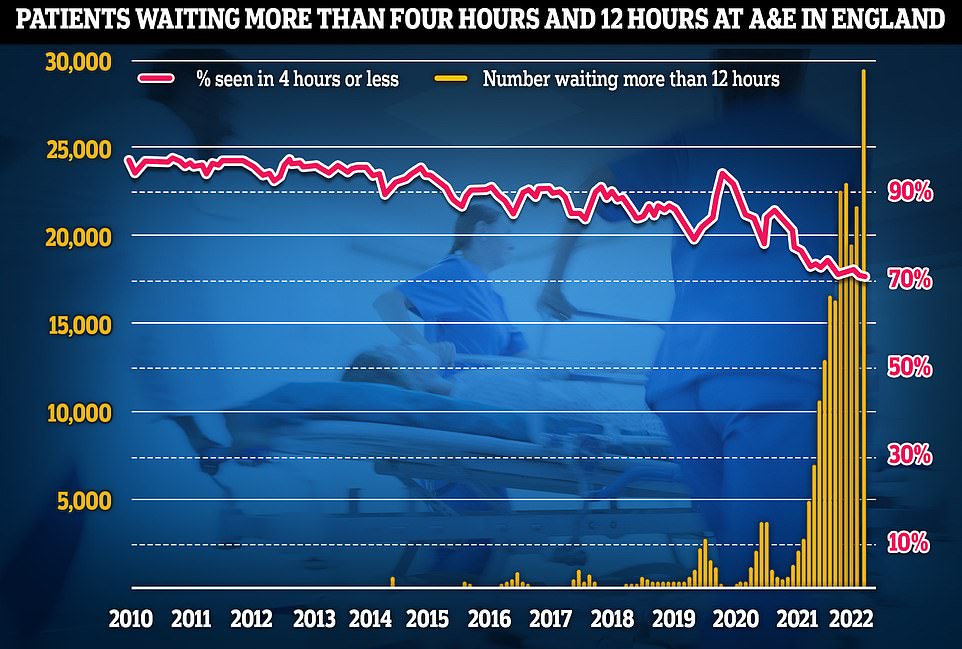 Latest NHS England data for July shows that more than 29,000 sickened people waited 12 hours at A&E units last month (yellow lines) — four times more than the NHS target and up by a third on June, which was the previous record. Meanwhile, the proportion of patients seen within four hours — the timeframe 95 per cent of people are supposed to be seen within — dropped to 71 per cent last month (red line), the lowest rate logged since records began in 2010 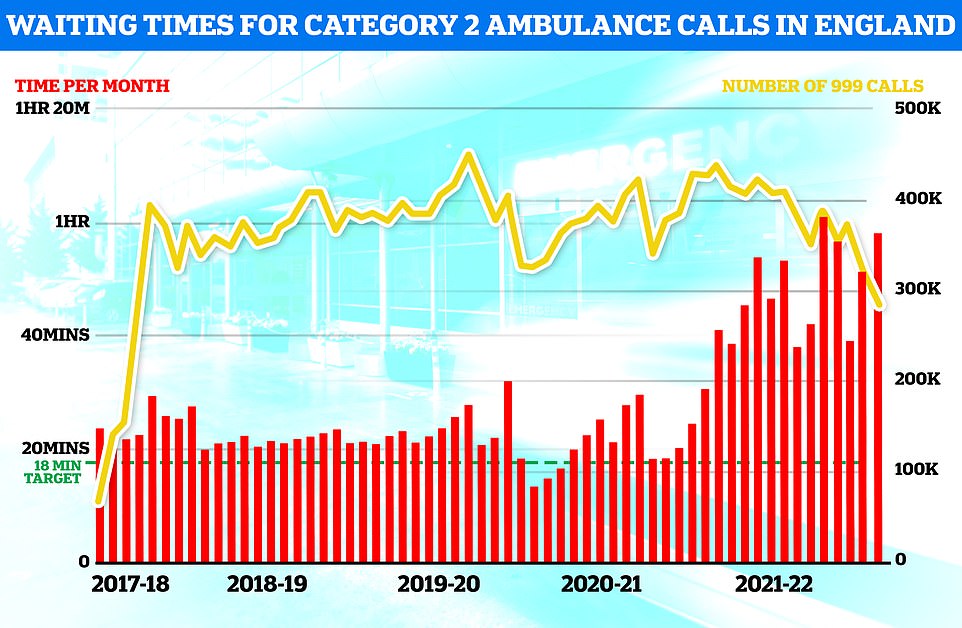 Separate ambulance figures show the average wait for heart attack and stroke victims surpassed 59 minutes for only the second time ever (red bars). The yellow line shows the number of category two calls, which hit 379,460 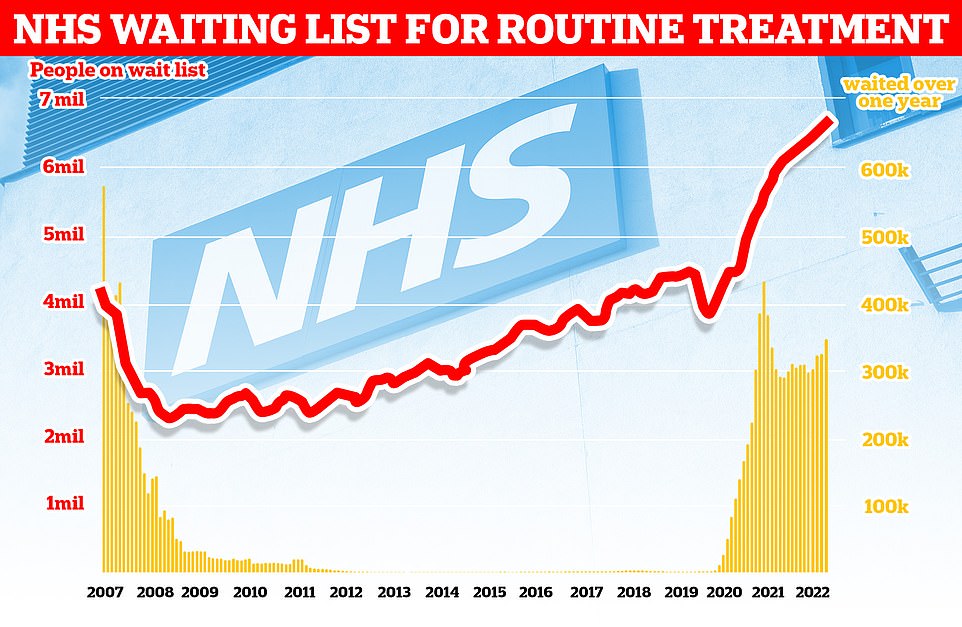 The number of people in England on the waiting list for routine hospital treatment hit a record 6.7million in June — meaning one in eight are now stuck in the backlog

The overall waiting list jumped to 6.73million in June. This is up from 6.61m in May and is the highest number since records began in August 2007.

There were 3,861 people waiting more than two years to start treatment at the end of June, down from 8,028 in May but still higher than April 2021, when the figure started to be recorded.

The number of people waiting more than a year to start hospital treatment was 355,774, up from 331,623 the previous month and the highest ever logged.

A total of 136,221 people waited at least four hours from the decision to admit to admission in July, down slightly from the all-time high of 136,298 in March.

Just 71 per cent of patients were seen within four hours at A&Es last month, the worst ever performance. NHS standards set out that 95 per cent should be admitted, transferred or discharged within the four-hour window.

The average category one response time – calls from people with life-threatening illnesses or injuries – was nine minutes and 35 seconds. The target time is seven minutes.

Ambulances took an average of 59 minutes and seven seconds to respond to category two calls, such as burns, epilepsy and strokes. This is three times longer than the 18 minute target.

Response times for category three calls – such as late stages of labour, non-severe burns and diabetes – averaged three hours, 17 minutes and six seconds. Ambulances are supposed to arrive to these calls within two hours.

Some 430,037 patients (27.5 per cent) were waiting more than six weeks for a key diagnostic test in June, including an MRI scan, non-obstetric ultrasound or gastroscopy.

The NHS England figures show that 2.1million showed up to A&E departments across the country in July. The figure is lower than the two previous months and on par with pre-pandemic levels.

And the problem is thought to be six times worse than the figures suggest. The 12-hour period covers the time between medics deciding a patient needs to be admitted and when they actually are given a bed.

But patients may have arrived hours before their condition was deemed serious enough for further treatment.

The NHS blames the problem on a shortage of beds. It said only four in 10 patients have been able to leave hospital when they were ready to due to a shortage of social care staff, who often take over caring for patients once they are discharged.

It said 12,900 patients a day spent more time in hospital than needed — 11 per cent more than in June.

The lack of beds has seen ambulances stuck in queues for 20 hours outside of hospitals, as emergency medics scramble to find beds for their patients. This is had a knock-on effect on ambulance response times.

Paramedics took a record nine minutes and 35 seconds, on average, to respond to category one 999 calls in July — those from people with life-threatening illnesses or injuries. This is compared to a seven minute target time and is 30 seconds longer than June.

It took nearly an hour to respond to heart attack, stroke, burns and epilepsy victims, classed as category two callers. The 59 minute and seven second average is the second-highest on record and more than three times longer than the 18 minute target.

Category three callers — such as the late stages of labour, non-severe burns and diabetes — had to wait an average of three hours and 17 minutes for an ambulance to show up, exceeding the two hour target.

Professor Sir Stephen Powis, NHS England’s national medical director, said: ‘Today’s figures show the immense pressure our emergency services are under with more of the most serious ambulance callouts than the NHS has ever seen before, at levels more than a third higher than pre-pandemic.

‘Recognising the pressure on urgent and emergency care services, we are working on plans to increase capacity and reduce call times ahead of winter in addition to our new contract with St John to provide extra support as needed.

‘While the total backlog will continue to increase for some time, by managing to virtually eliminate two-year waits we are turning a corner in tackling Covid’s impact on elective care and it is welcome news that in today’s figures we can also see a continued fall in the numbers waiting more than eighteen months.

‘As the country faces another period of high temperatures after last month’s record-breaking heatwave, it is vital that anyone who feels unwell seeks advice or an NHS referral through 111 online or their local pharmacy, and only calls 999 if it is a life-threatening emergency.’

Meanwhile, the number of people on the waiting list grew by 120,000 in June (1.8 per cent), with 6.73million now in the queue. The figure spiralled out of

The queue spiralled out of control from 4.2million in March 2020, as hospitals focused on treating the influx of Covid patients, dealt with record staff absences and helped with the vaccine rollout.

NHS forecasting from February shows that the problem will get worse before it gets better. The figure is expected to peak at 10.7million in March 2024 — at which point one in five people in England would be waiting.

NHS England this week said the number now stands at 2,777. But it said 1,579 patients ‘opted to defer treatment’ because they declined an offer of an earlier appointment at a different hospital.

And 1,030 two-year waiters are ‘very complex cases’ which would be unsafe to move to another hospital, such as spinal surgery that needs to take place at a specialist centre, it said.

This leaves 168 patients waiting more than two years, the vast majority of whom live in the South West, which has been worst hit by Covid absences and NHS pressures.

The NHS had a target of eliminating two-year waits by July, apart from those who choose to delay treatment and complex cases.

Its next deadline is to clear the number of people waiting more than 18 months by April 2023. One-year waits won’t be scrapped until March 2025.

Just 62 per cent of patients in June were seen within the four target after being referred. The average wait was 13 weeks — the highest logged since summer 2020.

He said: ‘Among those 6.7million on waiting lists, there could be a huge number of undiagnosed conditions like cancer. Record waiting times have a cost in lives.

‘More patients than ever before are left waiting an entire day to be seen for emergency conditions. 24 hours in A&E was just a TV programme, now it’s the reality under the Conservatives.’