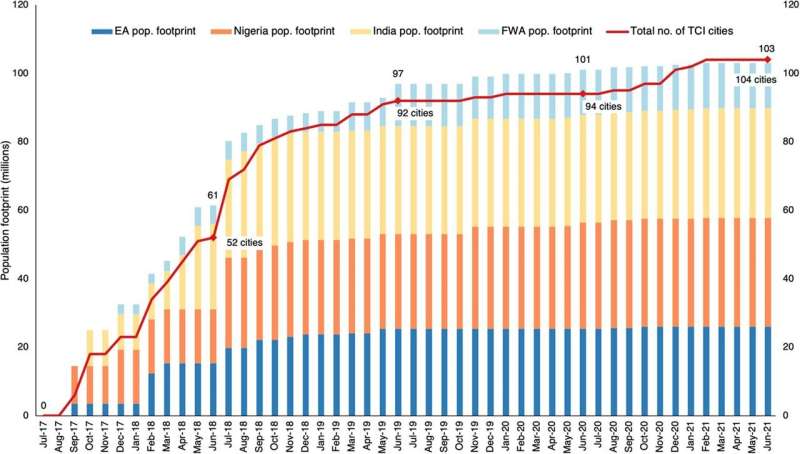 A family planning program built on the principle that local government involvement and investment can ramp up family planning services for the urban poor added more than two million new clients in 10 countries in its first five years.

Launched in June 2016, The Challenge Initiative, based at the Johns Hopkins Bloomberg School of Public Health’s Bill & Melinda Gates Institute for Population and Reproductive Health, works closely with city governments to help them implement family planning services that ultimately are run entirely by the cities.

The outcomes are highlighted in a paper published online November 14 in Global Health: Science and Practice. The publication coincides with the opening of the International Conference on Family Planning—the world’s largest gathering of family planning practitioners and stakeholders—this week in Pattaya, Thailand.

Family planning interventions are often short-lived and based in rural communities. The Challenge Initiative uses a systems approach to support ongoing city-based family planning programs for the urban poor.

“We always knew the key to successfully scaling family planning programs was to put city governments in the driver’s seat,” says Jose Rimon II, MA, director of the Gates Institute, senior scientist in the Bloomberg School of Public Health’s Department of Population, Family and Reproductive Health, and principal investigator for The Challenge Initiative’s first phase. “We’ve now demonstrated that our approach works. New data coming in from the field shows the impact during the Initiative’s period of engagement, and that continues to grow when local governments are solely at the helm.”

City governments that elect to work with The Challenge Initiative commit their own financial and human resources and then lead their program’s implementation. In return, cities receive access to seed funding and technical expertise from the Initiative, including coaching, training and toolkits that are available through the Initiative’s digital platform.

The authors note that understanding successful models that reach underserved communities is important for meeting the United Nation’s Sustainable Development Goals. One target calls on countries to ensure universal access to sexual and reproductive health care services, including family planning and education, by 2030.

Scaling up health interventions for the urban poor is critical—given the rapid pace of urban growth and a gap in understanding how best to meet their needs, including for contraceptives, in a sustainable way.

The authors note that while The Challenge Initiative is still a relatively young platform, its success to date lies in putting a premium on city government “ownership”—control over implementation and the involvement of key local stakeholders throughout the entire process.

The Challenge Initiative continues to expand its global family planning work with city governments across the world. In November 2021, the Initiative received two awards totaling $71.3 million from Bayer AG and the Bill & Melinda Gates Foundation. As of September 2022, The Challenge Initiative has worked in more than 150 cities in 12 countries and supported more than 2.5 million additional family planning clients since its 2016 launch—nearly 500,000 new clients since June 2021.