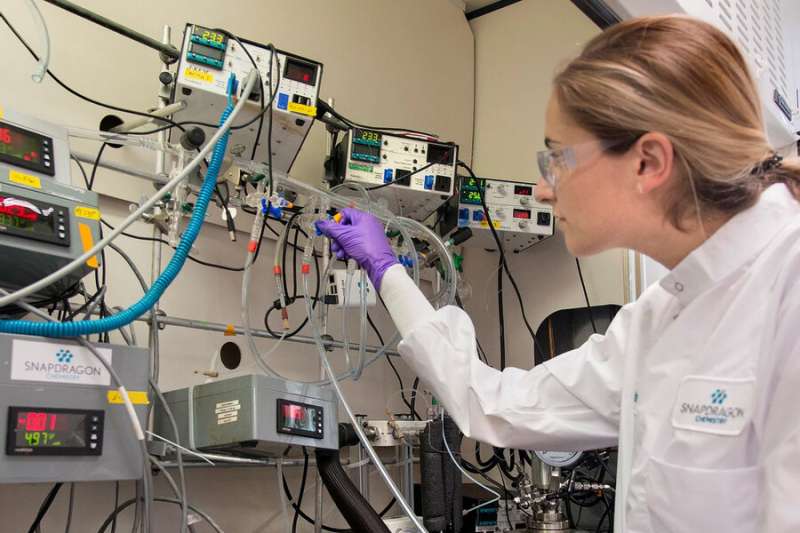 The Boston area has long been home to innovation that leads to impactful new drugs. But manufacturing those drugs for clinical trials often involves international partners and supply chains. The vulnerabilities of that system have become all too apparent during the COVID-19 pandemic.

Now Snapdragon Chemistry, co-founded by MIT Professor and Associate Provost Tim Jamison, is helping pharmaceutical companies manufacture drugs locally to shorten the time it takes for new drugs to get to patients.

Snapdragon essentially starts as a chemistry lab, running experiments on behalf of pharmaceutical customers to create molecules of interest. From there it seeks to automate production processes, often lessening the number of steps it takes to create those molecules. Sometimes the new process will require a technology—such as a specialized chemical reactor—the client doesn’t have, so Snapdragon builds the equipment for the client and teaches them to incorporate it into their processes.

Some of those reactors are being used for the commercial production of approved drugs, although most are designed to help pharmaceutical and biotech companies get through clinical trials more quickly.

“At the clinical stage, you just want to go as fast as possible to find out whether you have a useful therapeutic or not, oxybutynin overflow incontinence ” Snapdragon CEO Matt Bio says. “We’re really trying to stay focused on the technology for delivering drugs fast to the clinic.”

Snapdragon has worked with over 100 companies, ranging from small biotechs to large multinationals like Amgen, for whom it has helped develop potential cancer treatments. The company has also worked with research agencies to push the frontiers of automated material production, including in a project with the Biomedical Advanced Research and Development Authority (BARDA) to develop ribonucleotide triphosphates, which are the building blocks to mRNA-based COVID-19 vaccines.

In March, Snapdragon announced plans to build a 51,000 square foot facility in Waltham, Massachusetts, that will enable it to produce more drugs in-house, removing yet another step to get new drugs into the clinic.

“It’s about supplying the client with the fastest route possible to the molecule they need to test in the clinic,” Bio says.

By focusing on the processes and technology for synthesizing chemicals, the company believes it has potential to transform the economics of drug manufacturing at every scale.

“We can make [drugs] potentially a lot cheaper, and where that’s really interesting is [around questions like] how do you make a tuberculosis drug that’s, say, half a cent?” Bio says. “That’s a lot harder than making these complex drugs. But you need to save every penny if you’re going to roll out to parts of sub-Saharan Africa. Those are new opportunities we get to engage in.”

An idea, and a pivot

Jamison began thinking about starting a company when he noticed other scientists were interested in his research around continuous flow photochemistry, which uses light to spark chemical reactions and can offer huge cost and scale advantages over traditional chemistry processing done in batches.

“Generally, chemistry has been done since its origins in what we call batch mode,” says Jamison, who was also a principal investigator at the Novartis-MIT Center for Continuous Manufacturing and has published a number of papers around continuous flow chemistry processes. “It’s like cooking. We make a set quantity, that’s a batch. But if you’re going to be a food manufacturer, for example, you’d want something that’s continuous to meet the throughput, like an assembly line.”

In 2012, Jamison began mapping out what a company would look like with eventual co-founder Aaron Beeler, an associate professor of medicinal chemistry at Boston University. After two years of developing, vetting, and “pressure testing” their business model by seeking guidance from colleagues in their networks and MIT’s Venture Mentoring Service, the founders set out to start a company that would manufacture specialty and fine chemicals, focusing on those that would be well-suited to continuous flow synthesis. Snapdragon officially formed in October 2014 as Firefly Therapeutics.

Jamison likes to say the company pivoted on day one. Within a week of incorporating, the founders had secured two contracts—not to sell chemicals, but to help pharmaceutical companies develop continuous manufacturing processes.

Bio joined in 2015 at a time when the company—by then renamed Snapdragon—had secured consulting and services contracts. Snapdragon’s customer base was growing so rapidly by then the company moved four times in the first four years as it went from needing one lab bench to dozens.

Snapdragon’s work helping companies improve chemistry processes is still its most common service offering. Most of those improvements come from an understanding of what the latest reactor and automation technology can offer.

“If you walked around our labs, you’d see a lot of automation and robotics that are doing things that people used to do less efficiently,” Bio says. “Instead of our scientists being in the lab setting up a reaction, breaking down a reaction, they can just think about the chemistry and then use some of the robotic tools to get the answers they want faster.”

“One area where Snapdragon is really innovating is in lab [operating systems], which are a way of networking literally every single instrument in the company and gathering real-time information about processes,” Jamison says.

Bio says the expansion will be particularly beneficial for developing treatments to diseases with smaller patient populations and smaller material requirements. He notes that in some mRNA-based treatments, for example, a kilogram of material can treat millions of people.

The company also recently received a grant from DARPA to try turning plentiful commodities in the U.S., like natural gas and crop waste, into the starting materials for high-value pharmaceuticals.