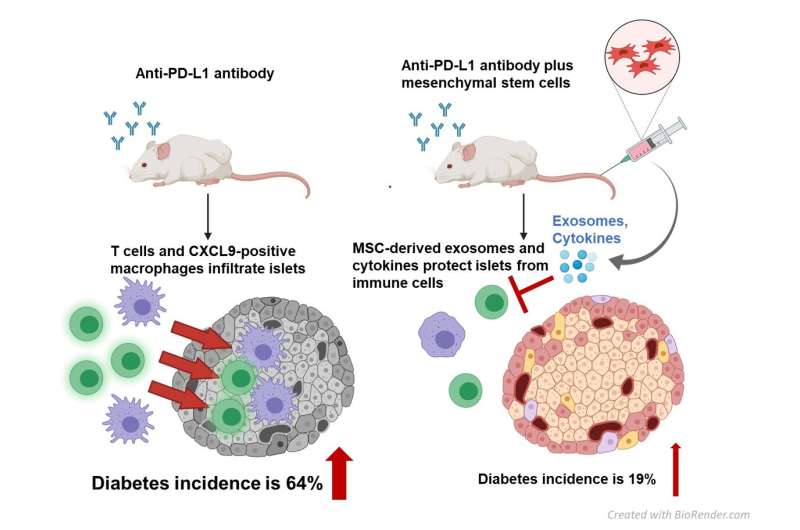 Immune checkpoint inhibitors are widely used to treat a variety of cancers; however, one serious side effect is the onset of type 1 diabetes. Now, researchers from Osaka University have discovered that stem cell therapy may protect against such side effects.

One strategy by which tumor cells evade recognition by the immune system is by upregulating factors that interfere with immune cell signaling—a process known as immune checkpoint. For example, the upregulation of programmed death-ligand 1 (PD-L1) leads to increased binding to its receptor (PD-1) on T cells of the immune system, inhibiting T cell activation. The therapeutic use of immune checkpoint inhibitors can reverse these effects, restoring immune system surveillance and tumor cell killing. However, these anti-cancer drugs are accompanied by autoimmune side effects, clarithromycin er and alcohol including the onset of type 1 diabetes.

Type 1 diabetes is a serious autoimmune disease that develops when the level of insulin produced by the islets of Langerhans in the pancreas drops below the required threshold, resulting in the body’s inability to control blood sugar levels. Such patients are dependent on insulin therapy. When insulin-producing cells are completely lost, the control of blood sugar levels becomes severely compromised, resulting in clinical complications, impaired quality of life, and a poor prognosis. Strategies for the prevention or cure of type 1 diabetes are currently lacking.

In the recent study at Osaka University, researchers showed that MSCs have therapeutic potential against immune-related adverse events. As Emi Kawada-Horitani, the lead author of the study, explains “We examined whether systemic MSC treatment could prevent the development of type 1 diabetes in a mouse model. First, we induced diabetes in the mice by administering a purified PD-L1 monoclonal antibody. Then, we injected human adipose-derived MSCs and analyzed immune cells in the pancreatic secretions,” Kawada-Horitani continues, “Inhibition of the PD-1/PD-L1 interaction with an anti-PD-L1 antibody resulted in a diabetes incidence of 64% among the mice, compared with 19% when the mice were also administered MSCs.”

Inhibition of the PD-1/PD-L1 interaction causes various changes in the immune system—most notably, the massive accumulation of immune cells (particularly macrophages) in the islets of Langerhans in the pancreas, disrupting insulin production.

“We found that MSCs effectively prevented this influx of immune cells,” corresponding author Shunbun Kita explains, “thereby avoiding the detrimental effects on pancreatic cells.” They further showed that MSCs secrete factors (such as exosomes) that protect the pancreatic cells against immune attack.