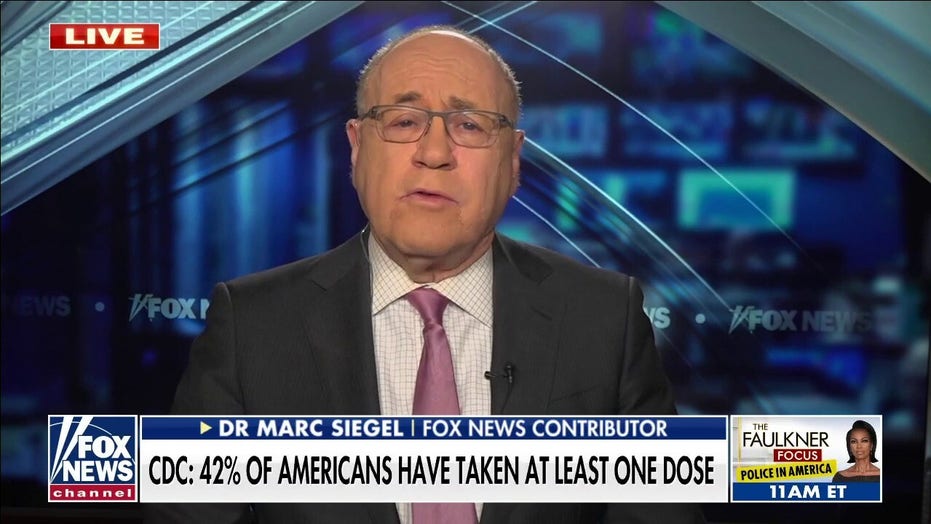 America heading in right direction ‘because of vaccination’: Siegel

Fox News contributor Dr. Marc Siegel with everything you need to know about the country’s COVID-19 status on ‘America’s Newsroom.’

The latest data from the Centers for Disease Control and Prevention (CDC) reports more than 55% of American adults now have at least one dose of COVID-19 vaccine, though recent findings estimated 8% of those are skipping their second appointments.

Dr. Gregory Poland, director of the Mayo Clinic’s Vaccine Research Group, told Fox News that the issue is likely less about vaccine hesitancy, and more that people are caught up in their busy lives.

“Whenever you require more than one dose, compliance drops,” Poland said in an interview. “People are busy, allied board shop life is busy. I mean obviously, they got the first dose, they’re not anti-vaccine and then a variety of factors” such as appointment bungles related to travel, but also media-driven misinformation that can take a toll on vaccination adherence, he said.

Research published Wednesday in the New England Journal of Medicine focused on responses from 1,000 American adults who were asked about the vaccines in February. One-fifth of respondents indicated to the Cornell-led research team that they believed the Moderna and Pfizer COVID-19 vaccines, each two-dose shots, provided strong protection after only one jab, while 36% said they were unsure. Less than half said they believed the shots provided strong protection a week or two after the second dose, according to a news release posted to EurekAlert.org.

“The media has some culpability of headlines that read, ‘80% efficacy after a single dose,’ and so people think ‘Oh OK, 80% is kind of like a lot of other vaccines, I’m good,’” he said. “And the headline belies the reality of the fact that we don’t know what that efficacy would be now in the face of new viral variants, we don’t know how long immunity would last [after a single dose].”

Top White House coronavirus adviser Dr. Anthony Fauci during a briefing Friday noted that the percentage of Americans not showing up to their second vaccination appointments falls within what’s typically seen for other vaccines requiring multiple doses.

“So thus far the 8%, though you’d like to see a 100% adherence, 8% is within the realm of what you see with other multi-dose vaccines,” Fauci said, later citing a multitude of studies indicating “dramatic differences” in the protection afforded after the second dose, compared to just receiving the initial shot.

For instance, Israeli researchers previously found Pfizer-BioNTech’s vaccine was 57% effective against symptomatic COVID-19 14-20 days after the first dose, while vaccine efficacy ramped up to 94% at least a week post-second dose. Protection against documented infection increased from 46% to 92% after the second dose, per the findings published in the New England Journal of Medicine. Similarly, separate results published in the same journal on Moderna’s jab indicated a significant increase in T-cell response to the spike protein following the second dose.

“Yet again, another important difference,” Fauci said of the findings, which he referred to during the briefing on Friday.

Fauci also stressed that immunocompromised individuals, such as those battling autoimmune diseases or cancer, complete a full two-dose series if they receive Pfizer or Moderna’s vaccines.

“This becomes really important because organ transplant individuals, particularly on a variety of immunosuppressant drugs and cancer patients, there are a lot of people in society on glucocorticoids for autoimmune diseases that may not get a good enough response after the first dose and we absolutely want them to get the second dose,” Fauci said.

GET THE FOX NEWS APP

“If a few people here and there skip the second dose, it may not have a great impact, but if many people do, then it could hinder the long-term herd immunity we are trying to achieve.”