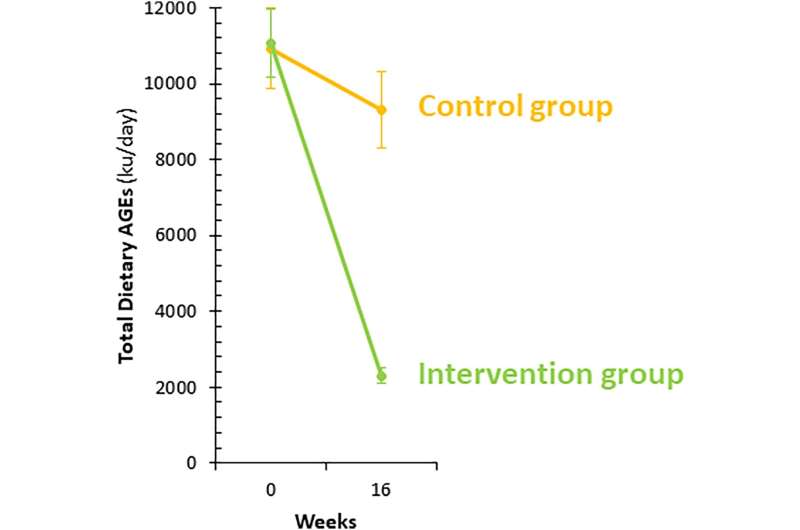 Eating a plant-based diet reduces inflammatory dietary advanced glycation end-products (AGEs) by 79%, compared to a 15% reduction for a diet that includes meat and dairy products, according to a new study by researchers with the Physicians Committee for Responsible Medicine published in Obesity Science & Practice. The decrease in AGEs was associated with an average weight loss of 14 pounds and improved insulin sensitivity.

AGEs are compounds that are formed in the bloodstream when proteins or fats combine with glucose. AGEs cause inflammation and oxidative stress, which eventually lead to chronic diseases, including type 2 diabetes and cardiovascular disease.

AGEs may be ingested through the diet, and animal products are generally higher in AGEs than plant foods. AGEs are also formed during normal metabolism but are formed at an increased rate when a person has metabolic syndrome—high blood sugar, high cholesterol, high blood pressure, and insulin resistance.

In the study, 244 participants who were overweight were randomly assigned to an intervention group, which ate a low-fat plant-based diet, or control group, which made no dietary changes, for 16 weeks.

At the beginning and end of the study, body composition was measured and insulin sensitivity was assessed. Dietary AGEs were calculated based on self-reported dietary intake records. A dietary AGEs database was used to estimate dietary AGEs intake.

Body weight decreased by about 14 pounds (6.4 kg) in the plant-based group, compared with about 1 pound (0.5 kg) in the control group, largely due to a reduction in fat mass, notably visceral fat. Insulin sensitivity improved in the intervention group.