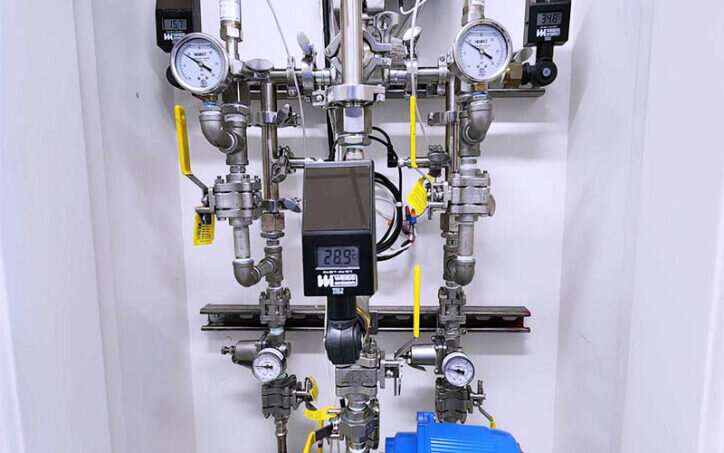 Of the many features in the recently-opened Hale Family Building at Boston Children’s, maybe one of the most impactful for patients and clinicians is an innovation that puts a new spin on an old way of conducting perfusion in open-heart surgery.

Used in cardiac operating rooms (ORs) until only a few decades ago, wall water systems had long helped perfusionists control a patient’s body temperature while maintaining their blood flow during heart surgery. But these bulky and imprecise systems were eventually replaced by more compact heater-cooler devices that seemed to be the way of the future—until they were linked to a safety issue and removed from ORs, requiring Boston Children’s perfusionists to reconsider how they went about their work.

“We didn’t have a good option. There actually was no other option, strattera and ginkgo biloba ” recalls Gregory Matte, CCP, Chief Perfusionist at the Benderson Family Heart Center. So Matte and his colleagues set out to create a solution that would not only meet the needs of the moment to keep patients safe but also improve how perfusion is delivered in cardiac surgery.

They realized that with some refinements, the old way of the wall water system was, in fact, still an effective tool for delivering and managing the water that plays a crucial role in perfusion. By modernizing the system, the perfusionists now have just the right amount of water at just the right pressure and temperature. Such precision lets them control a patient’s body temperature with pinpoint accuracy, a key to a safe and successful surgery.

Safety concerns led to a rethinking of perfusion

But in 2016, medical experts around the world discovered a link between a widely used commercial heater-cooler device and potentially life-threatening bacterial infections. Boston Children’s immediately stopped using that particular model and switched to another manufacturer’s device only as a backup.

Matte confirmed that was the proper decision after he and colleagues from the Department of Cardiac Surgery ran a test to see how much of a threat any heater-cooler with an exhaust fan could pose. The test showed that the “curtain” of high-pressure air surrounding an operating table—which eliminates the chances of a contaminant infecting a patient—was potentially compromised by air flowing from a heater-cooler’s exhaust fan. This left no doubt they had to find a new way to continue providing crucial perfusion support without any risk. “We had to invent a solution,” Matte says. “There was no commercially available option to address our concerns with the heater-cooler units.”

The ‘old’ way created an opportunity for new efficiencies

At a time when “innovation” usually means new, different, or even “cutting edge,” Matte and his colleagues found a modern solution in an unexpected place: the past. In the early years of cardiac surgery, perfusionists relied on water lines connected to wall outlets to send hot and cold water to a heart-and-lung machine. But hospitals started implementing the standalone heater-cooler units in the 1990s, and the older wall water systems were mostly phased out a decade ago, according to Matte. Needing to quickly abandon the “new way,” the perfusionists realized the old way wasn’t obsolete after all—it just needed updating.

Matte and his colleagues joined specialists from Boston Children’s Infection Prevention and Control, as well as electricians and carpenters from the hospital, to create a modernized wall water system in just six weeks. Wall water systems were installed on the level beneath four cardiac ORs with connections running upstairs to a mixing valve and other components that are placed in OR closets.

The reconfigured system includes new features that have made the perfusionists’ job efficient, including a water flow “bridge” that lets them test water before connecting to the heart-and-lung machine and also immediately disconnect from the machine if there’s a water system malfunction. The setup also improved the efficiency of heat being exchanged between the system and a heart-and-lung machine.

Most importantly, the wall water system successfully performs a key function behind open-heart surgery: It supplies a heart-and-lung machine with water that is precisely controlled for temperature and pressure by a perfusionist who works a remote control next to the machine. In contrast, heater-cooler units can’t reach that kind of exactitude on their own and require a perfusionist to manually toggle controls between hot and cold.

“The wall water system, we just set it and it’s the temperature we want,” Matte says. With a patient’s body temperature at a proper temperature, surgeons have the time to safely operate on a heart, making Matte and his colleagues confident their innovation will allow them to perform effective perfusion long into the future.

In addition to safety and efficiency, water is conserved

After assisting perfusionists in more than 4,000 cardiac surgeries at the Benderson Family Heart Center’s former location inside Boston Children’s main building, wall water systems were installed in the center’s new home at the adjacent Hale Family Building. Placing the systems in the new building enabled Matte and his colleagues to realize another goal: water conservation. The systems send used water that doesn’t mix with blood or any other liquid during surgery to special holding tanks. From there, the water flushes toilets.

Matte is pleased that when faced with the pressure of quickly creating a safer, more precise method to deliver and manage perfusion, he and his colleagues figured out a new and more effective way, even if it was based on the “old way.”