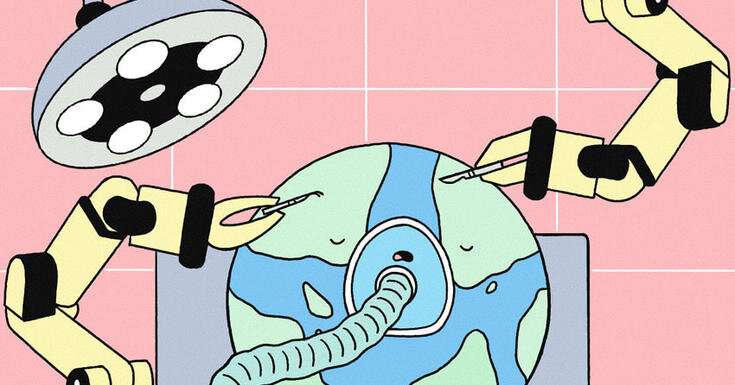 In April 2021, during the Leaders Summit on Climate, President Biden announced his goal to drastically reduce the United States’ greenhouse gas emissions by 2030.

The question that emerged from their messages was a crucial one: What role can the medical community, which accounts for about 8.5% of America’s greenhouse gas emissions, play in these climate change reduction efforts?

A year later, research that Agbafe and Berlin led outlines some answers. Their paper describes how surgery, particularly cancer surgery, contributes to climate change and suggests some solutions to combat the problem, from reducing waste to rethinking how surgical care is delivered.

“In general, these ideas are good for our planet,” Agbafe said. “But also, surgery unfortunately plays a disproportionate role in the carbon output and the waste we produce in medicine.”

Operating rooms are a massive source of greenhouse gas production for hospitals, representing 70% of their waste and generating three to six times as much carbon as the rest of health systems.

Cancer care is an obvious target for greener efforts within surgery, Berlin notes, because it often involves intense levels of care over a short period of time.

Plus, minimally invasive surgeries that require a lot of energy, including robotic-assisted operations, have become common treatments for cancers ranging from colorectal and uterine cancer to head and neck cancer. A robotic-assisted hysterectomy, for example, produces as much carbon as driving more than 2,200 miles in a car—the equivalent of a road trip from Ann Arbor, Mich., to Los Angeles.

“If we can lower our greenhouse gas output, we have a chance to extend the lifespan of our patients and expand access to timely care,” Agbafe said. “And we think it’s really important that the surgical community is proactive at being at that table.”

What to do differently

One of the most feasible changes to make in this space would be around waste reduction, Agbafe said.

This might be as simple as making sure that anything thrown away before or during surgery is properly categorized and labeled since it’s estimated that over 90% of OR waste does not meet the necessary standards for the type of trash it ends up in. (The red waste bags in ORs are intended only for items that have been exposed to bodily fluids and are much more expensive to dispose of than clear disposal bags.)

Hospitals could also consider switching to some reusable or reprocessed devices and surgical gowns since there is no link between reused tools and hospital-acquired infections.

Some of the pair’s other suggestions involve optimizing ORs’ energy use. Agbafe and Berlin point to the American Society of Healthcare Engineering’s recommendations to install energy-efficient lighting, schedule preventive maintenance and minimize air flow into rooms that aren’t being used as easy ways to green the systems.

The surgical supply chain could be more efficient, too, they write. Estimates suggest that 87% of the surgical instruments laid out for an operation are rarely used, so coming up with standardized lists of the necessary tools for surgeries that occur regularly could cut down on cost, waste and the energy needed to sterilize and repackage those instruments.

“Given some of the geopolitical events that have been going on right now in Ukraine and with China and the competition there along with the effects of pandemic is creating an increasing emphasis on resiliency within supply chains,” Agbafe said. “So this idea of localizing our operating room supply chains is something that there’s a lot of political energy and momentum within the public to move towards.”

But perhaps the broadest way the oncology space could cut down on its greenhouse gas emissions is to change how surgical care is delivered, starting with permanently offering telemedicine.

“We think telemedicine is a great opportunity for us to lower the climate impact and improve the quality of care by doing so,” Agbafe said. “During the pandemic, we’ve been using virtual care and if we could make that a routine aspect of cancer care for pre-op and post-op, that’s a way we can reduce the climate impact of delivering care and make it more convenient for patients.”

This has been a priority for U-M, thanks to the Michigan Program on Value Enhancement—a collaboration of Michigan Medicine and the University of Michigan Institute for Healthcare Policy that aims to improve the quality of care at the institution—and a partnership with the similarly oriented Michigan Value Collaborative, also referred to as MVC, a collaborative quality initiative that serves the entire state.

Last year, the two organizations collaborated on a study that highlighted how much routine testing was still done before surgeries despite its low value. Berlin was the first author.

“U-M is considered one of the leading institutions studying low-value care and efforts to limit that type of care,” Berlin said. “But like a lot of other centers, we are really just at the precipice of these initiatives. I would anticipate big changes in the next 10 years.”

From gas to (more sustainable) gas

Some sustainability shifts may come even sooner at Michigan Medicine.

For instance, the Department of Anesthesiology recently launched the Green Anesthesia Initiative, or GAIA for short. Its mission: become more environmentally conscious about the types and rates of anesthesia its providers use, another area Agbafe and Berlin say is ripe for improvement.

“This is a topic of fairly intense discussion right now in the field, and I’ve been thinking about it for a while,” said George Mashour, M.D., Ph.D., the chair of the Department of Anesthesiology and the Robert B. Sweet Professor of Anesthesiology at the University of Michigan Medical School. “Unlike other industries, I don’t think that we require massive disruption in order to make progress because, fortunately, we have options.”

Several inhaled gases regularly used for anesthesia are A-list offenders when it comes to greenhouse gas production. Nitrous oxide, commonly known as laughing gas, is a greenhouse gas, a direct ozone depleter and does not dissipate from the atmosphere for more than a century after it’s produced.

However, the inhaled anesthetic sevoflurane has much less of an environmental impact than nitrous oxide and other common inhaled agents, so Mashour says it would be a good alternative.

“The overall goal is to shift away from some of these egregious culprits and start making better choices about which drug we use and then also how we use it,” Mashour said.

“The contributions in terms of greenhouse gas effect or ozone-depleting action partly relate to how much is getting pumped out into the atmosphere and that relates directly to how high we have our fresh gas flow,” he added. “If we have, for example, 10 liters going, we’re blowing a lot of anesthetic into the scavenging and waste and atmospheric systems that doesn’t need to be there.”

To that end, Mashour’s colleagues in the Department of Anesthesiology are already leading a national initiative to try to reduce anesthetic gas flow rates through the Multicenter Perioperative Outcomes Group, another quality initiative that includes health centers from across the country.

Mashour plans to roll out other elements of GAIA over a three- to- five-year period.