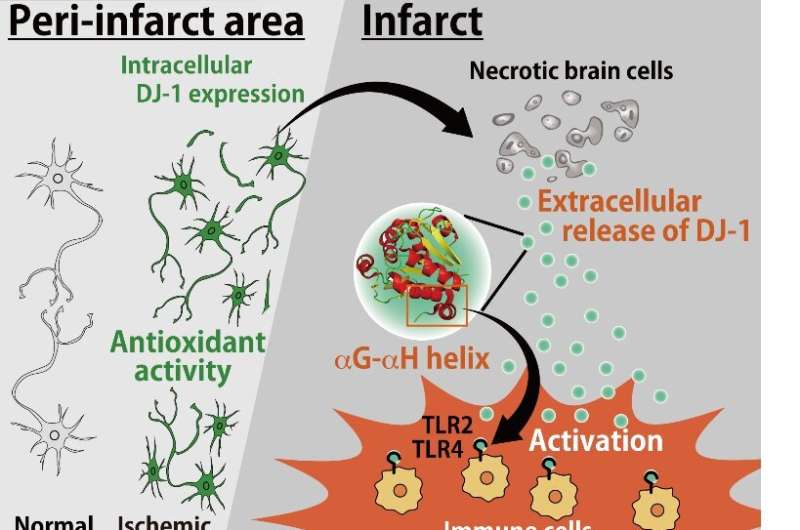 A protein that provides essential protection against free radicals inside the cell provokes damaging inflammation when released outside, activating immune cells and worsening damage following a stroke, according to a new study published 20th May, 2021 in the open access journal PLOS Biology by Takashi Shichita of the Tokyo Metropolitan Institute of Medical Science and colleagues.

The protein DJ-1 acts within cells to mop up dangerous molecular fragments called free radicals. It is thought to prevent neurodegeneration by reducing oxidative stress within aging neurons; indeed, an inactivating mutation in the gene that encodes DJ-1 causes one form of Parkinson’s disease (DJ-1 is also known as PARK7 for this reason).

When a cell ruptures, its contents are released into the surroundings, medical diflucan where certain released molecules, called DAMPs (damage-associated molecular patterns) act as alarm signals to activate inflammatory processes, including the attraction of macrophages to clean up the damage. At low levels and for short periods of time, inflammation in the brain can be beneficial. But when the damage is extensive, as in stroke, inflammation can contribute to the problem rather than the solution.

To identify new DAMPs, the authors prepared brain homogenates and then separated the proteins within by molecular weight. They had previously shown that one subset, between 15 and 25 kilodaltons, contained DMAP activity. Here, they identified candidate proteins within that subset by using mass spectrometry, generated the purified proteins, and then added them to cultured macrophages.

One of those proteins was DJ-1, which prompted upregulation of inflammatory cytokines in the macrophages. The researchers showed that this effect was triggered by interaction with Toll-like receptors on the surface of macrophages, membrane proteins known to mediate inflammatory activation. To further confirm DJ-1’s pro-inflammatory potential, the team showed that its DAMP activity depended on the presence of two key sections of the protein’s three-dimensional structure; altering these abolished the effect. Finally, they showed that DJ-1 was released by dying cells during stroke in a mouse model, and that knocking out DJ-1, or blocking it with an antibody, reduced the damage caused by stroke.

“Extracellular DJ-1 is a previously unknown inflammatogenic DAMP,” said Shichita, “and may be a putative target for therapeutic intervention to prevent the progression of inflammatory and neurodegenerative diseases.”