Ultrarunner Robbie Belanger did the seemingly impossible in 2019, when he ran 3,175 miles across the United States in 75 days. Most recently, the ultrarunner teamed up with Ten Thousand and the Feats of Strength series when planning his next athletic endeavour: setting a new world record for the fastest known time (FKT) in the Central Park Loop Challenge.

A well-known event among distance runners, nexium side affect the challenge consists of running as many laps of the park’s 6.1km track as possible during its daily opening hours of 6:05 a.m. and 12:55 a.m. The previous record was 11 laps of the park, comprising 67.1 miles, completed in a time of 14 hours. Belanger’s goal was to surpass this by completing 17 laps—more than 100 miles—during the 18 hours and 50 minutes that the park is open.

Unlike his transcontinental run, which required Belanger to track his pace with precision in order to ensure he didn’t exhaust himself and throw himself off for the next day’s miles, the Central Park Loop was “one big push” where he would be giving it his all. This was reflected in his training, which saw him running at least 10 miles a day every day for 50 days leading up to the attempt, focusing on building consistency. 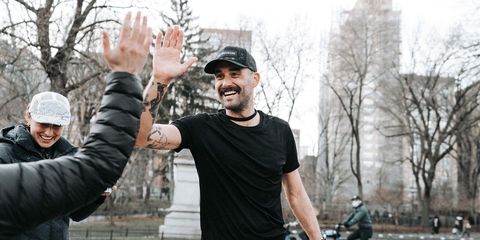 “I definitely had nerves as anyone would, knowing that you’re about to put yourself in a pretty compromising place for the next eighteen and a half hours,” said Belanger. “There’s an immense amount of pain and suffering that you’re thrusting yourself into. It brings butterflies in your stomach just knowing what’s about to happen and how it’s about to feel… I’d seen it on paper, but it was still hard to process that in New York City I was going to find myself having to dig deep to get up some of these hills. When I got to Harlem Hill, I was thinking, holy hell is that brutal.”

Belanger ultimately completed 16 loops of the track (a total of 100 miles) in 18:07:44, with an average mile pace of 10:59. In addition to smashing the previous record by more than 30 miles, Belanger also beat his own prior best time for a 100-mile run. And while his training gave him the foundation he needed, Belanger claimed that seeing people come out to cheer him on throughout the day gave him a huge boost to keep going.

“Talking to people as I ran gave me so much fuel,” he said. “Due to COVID, I was more social in that 18 and a half hours than I’ve been in a year.”

Belanger added that the reason he continues to put his body through these huge undertakings is to remind himself that while life is often full of difficulties, it is possible–and often necessary—to push through that hardship. “When I get in these positions where I am exhausted and I’m pushing my body and my mind, I’m reminded of that, and it reinvigorates that part of me and carries over into every part of my life,” he said. “I then have it with me again until it’s time to do another.” 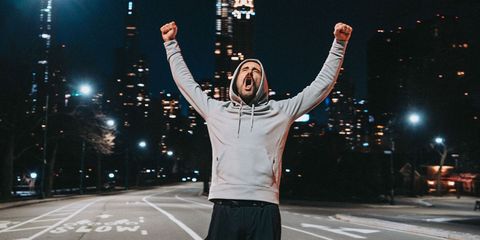