Richmond Raceway is celebrating its 75th anniversary this weekend with a three-race NASCAR card and memorial events honoring 9/11 first responders.

The track, located near downtown in Virginia’s capital city, has been known by several names since its first race in 1946. Most have had “Fairgrounds” and “Richmond” in there somewhere, and (perhaps surprisingly) there have been two periods with “Rural” in its title and one with “International.”

RR is hosting its 130th NASCAR Cup Series race on September 11. (FYI: only Martinsville and Daytona Beach have had more). The 400-lap feature stretches to 300 miles on the ¾-mile asphalt. In the distant past the track hosted races as short as 200 laps and as long as 500. It was a half-mile dirt facility from birth until being paved in 1968, and was reconfigured from your basic flat oval to its banked D-shape between the spring and fall races of 1988.

New Englander Ryan Preece won Friday night’s Whelen Modified Tour’s 156-lap race that went six overtime laps. The Saturday schedule has the Go Bowling 250 Xfinity Series race at 2:30 featuring—as if nobody knew by now—Dale Earnhardt Jr. in his annual one-off. That’ll be followed at 7:30 by the Cup Series Federated Auto Parts 400, the second race in the first round of the four-round Playoff Series. The 10-race series will determine the Cup Series champion on Nov. 7 at Phoenix. 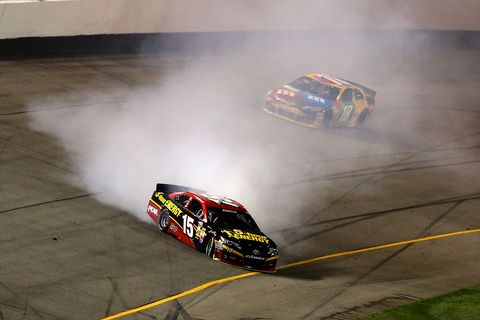 As often happens with “big-number anniversaries,” the Raceway staff and its panel of experts/advisors/historians picked 75 “moments” to highlight its IndyCar and NASCAR history. They got most of them right … except for shamefully ignoring the infamous 2013 “finish-fixing” scandal that directly impacted the Chase for the Championship field. Even after eight years, it remains a dark moment that NASCAR and a few teams and owners/crew chiefs/drivers/spotters would just as soon go away.

But history is history, so here are the 75 “greatest moments” in Richmond Raceway history:

MOMENT 1: In February of 1986, an epic battle between Darrell Waltrip and Dale Earnhardt ends with a late-race crash in Turns 3-4 that opens the door for Kyle Petty’s first career victory.

MOMENT 2: Throughout the spring and summer of 1988, track founder Paul Sawyer’s vision becomes a reality as the half-mile Richmond Raceway is updated to a 3/4-mile, D-shaped showplace.

MOMENT 4: In February of 1986, the legendary Dale Earnhardt unbuckles his seat belts while driving under cautions, leans out his window, and cleans dirt and mud off his windshield to avoid having to pit.

MOMENT 5: In February of 1988, Neil Bonnett wins the last race on the old half-mile track. Moments after the checkered waves, Richard Petty jumps aboard a bulldozer to start tearing up the track in anticipation of its impending renovation to a ¾-mile.

MOMENT 6: In September of 1991, Harry Gant wins his second consecutive Cup race (after Darlington) en route to four Cup victories in the month to become “Mr. September.” (He also won at Darlington, Dover, and Martinsville). He also won Richmond’s Xfinity race that weekend.

MOMENT 8: In April of 1953, Lee Petty wins the Richmond 200, the first NASCAR Cup Series race in the speedway’s history. He was the first of three racing Pettys to win at Richmond.

MOMENT 9: In September of 1968, Richard Petty wins over David Pearson in the Capital City 300. It wasn’t the first time the future superstars would finish 1-2 in a short-track race.

MOMENT 10: In September of 1988, Davey Allison christens the new ¾-mile D-shaped layout with a dominant victory, his first in a Cup Series short-track race.

MOMENT 12: In February of 1984, after a horrific rolling, tumbling, high-speed crash at Daytona Beach two weeks prior, Virginia native Ricky Rudd tapes his eyes open and comes back home to win the 500-lapper for owner Bud Moore.

MOMENT 13: In September of 2001, Chesapeake native Ricky Rudd moves Kevin Harvick aside with a late-race move to win the Chevrolet Monte Carlo 400.

MOMENT 14: In May of 1948, the legendary Red Byron wins the very first NASCAR-sanctioned race in the Commonwealth of Virginia, at Martinsville Speedway.

MOMENT 15: In May of 2008, after a side-by-side battle, Kyle Busch slides up into Dale Earnhardt Jr., thus opening the door for Clint Bowyer win the 400-lapper.

MOMENT 16: In September of 1999, highly touted open-wheel superstar Tony Stewart gets his first Cup Series victory as a rookie with owner Joe Gibbs.

MOMENT 17: In March of 1965, Junior Johnson wins the Richmond 250 as ABC-TV broadcasts the first full-length race.

MOMENT 18: In May of 1968, legendary Virginia driver Bill Dennis wins a Late Model Sportsman race, the last event before Richmond is converted from dirt to pavement.

MOMENT 19: In September of 2018, the full Richmond Raceway Reimagined project is completed. Fans make their way into the Fan Grounds for the first time.

MOMENT 20: In September of 2003, the second installment of the Rudd/Harvick feud results in a Harvick wreck, a spirited fight, and Rudd’s “Yap-Yap Mouth” quote about Harvick.

MOMENT 21: In September of 2004, Kyle Busch wins a 250-lapper in the Xfinity Series (then the Busch Series), then visits the brand-new Victory Lane inside the Fan Grounds.

MOMENT 22: In June of 1998, Jeremy Mayfield wins in walk-off fashion to qualify for the first NASCAR playoff series, which became the Chase for the Sprint Cup.

MOMENT 23: In September of 1991, in which he later admitted was retaliation, Rusty Wallace spins Jeff Gordon while taking the lead as the crowd goes wild. Terry Labonte avoids the incident and sneaks through for the victory.

MOMENT 24: In February of 1989, Rusty Wallace comes back from a lap down to win in a race that finishes near Midnight, a name that would be given to his most famous race car. 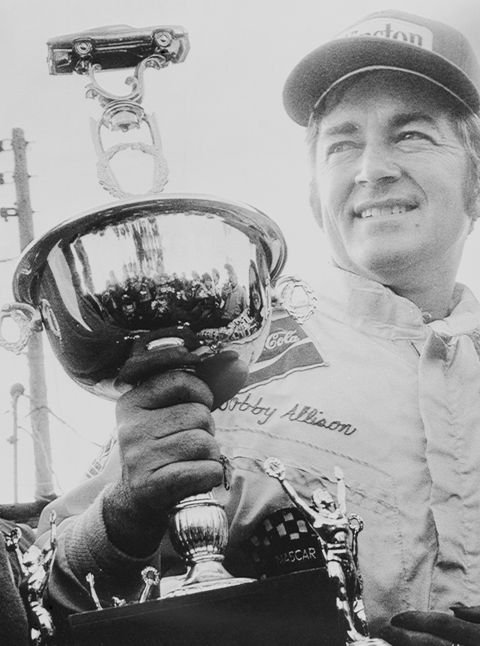 MOMENT 25: In February of 1974, Bobby Allison beats Richard Petty by four seconds, snapping Petty’s seven-race Richmond winning streak. It was also the closest finish at Richmond at that time.

MOMENT 26: In March of 1964, what was then known as Atlantic Rural Fairgrounds, hosted its first night race on a Tuesday. David Pearson beat Richard Petty by half-a-lap.

MOMENT 28: In March of 1971, legendary Virginia short-track driver Bill Dennis puts Junie Donlavey’s No. 90 Ford on the pole for the Capital City 500.

MOMENT 29: In April of 1961, Richard Petty got the first of his 13 Richmond victories. The fourth victory of his career came over Cotton Owens and Buck Baker.

MOMENT 30: In September of 1995, Terry Labonte and Geoff Bodine finish 1-2 in a photo finish in the first Craftsman Truck Series event at Richmond Raceway.

MOMENT 31: In September of 2005, Mark Martin battles side-by-side with Kurt Busch, winning a thrilling International Race of Champions. It was IROC’s second appearance at Richmond.

MOMENT 32: In March of 1990, the Modified Tour returns to Richmond for the first time since the 1960s. It marks the introduction of the Strawberry Hill Mod Squad.

MOMENT 34: Between September of 1982 and September of 1983, local favorite Bobby Allison won all three Cup Series race. He swept both races in 1983 after winning the fall of 1982.

MOMENT 36: In September of 2009, Brian Vickers upsets Kyle Busch and gains a spot in the Chase. Virginia native Denny Hamlin from nearby Chesterfield County breaks through to win at his home track.

MOMENT 37: In September of 2008, in one of the most exciting side-by-side battles at America’s Premier Short Track, Jimmie Johnson beats Tony Stewart.

MOMENT 38: In February of 1992, Mark Martin gets his only Richmond Raceway Cup victory. It’s allowed to stand even though his Roush-Fenway Ford fails tech inspection, costing him points and money.

MOMENT 40: In October of 1975, Darrell Waltrip gets his second career Cup Series victory, in a 500-lapper. Virginia legend Lennie Pond, who beat Waltrip for Rookie of the Year, finishes second after leading over 200 laps.

MOMENT 41: In May of 1955, future Virginia Sports Hall of Famers Paul Sawyer and Joe Weatherly lease the Atlantic Rural Exposition, setting in motion decades of upgrades, improvements and growth into the Richmond Raceway we know and love today.

MOMENT 42: In September of 1972, Richard Petty’s car ends up sliding on the guardrail, but he still comes back to win the race, one of his 13 here.

MOMENT 43: In June of 2001, Buddy Lazier wins the first Indy car race at Richmond Raceway with the Indy Racing League came to town.

MOMENT 44: In March of 1997, Rusty Wallace spins early, but rallies to win an epic battle over Dale Jarrett, Geoff Bodine and Jeff Gordon.

MOMENT 45: In April of 1957, Virginia native and beloved figure Glen Wood wins the first of only three NASCAR Convertible Series events at Richmond.

MOMENT 48: In February of 1982, Davis Marcis picks up his final career victory by staying out as leader Joe Ruttman wrecks in the final laps. When rain cut the race short, Marcis was called the winner.

MOMENT 50: In September of 1996, Ernie Irvan outduels Jeff Gordon in Irvan’s first full season back from injury. It’s his second win since almost losing his life at Michigan in 1994. 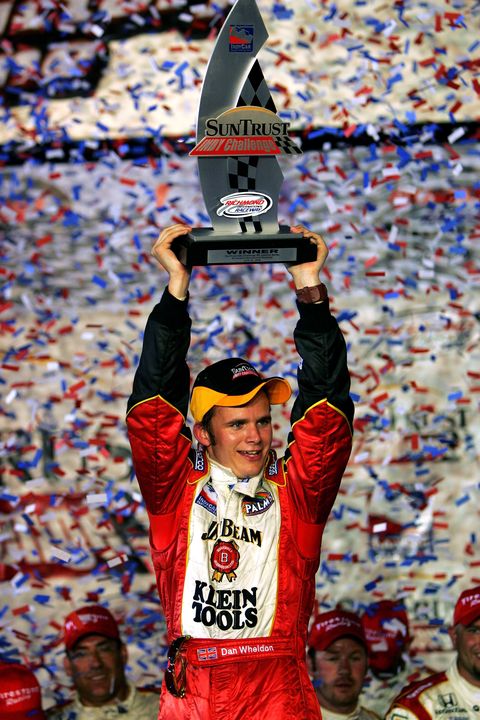 MOMENT 52: In June of 2004, Dan Wheldon grabs the second victory of his IndyCar career in the SunTrust Indy Challenge.

MOMENT 53: In March and September of 2019, Martin Truex Jr. finally breaks through with short-track victories at Richmond, winning both 400-lap Cup Series races.

MOMENT 54: In May of 1950, Norfolk’s own “Little Joe” Weatherly wins the American Motorcycle Association championship in a 10-mile race on the dirt surface on the current location of Richmond Raceway.

MOMENT 57: In September of 1998, Virginia native Jeff Burton holds off Jeff Gordon by 0.051 seconds, one of the closest finishes in Richmond Raceway history.

MOMENT 58: In September of 1981, in the first Richmond race with an entitlement sponsor, Benny Parsons wins the Wrangler SanforSet 400.

MOMENT 60: In March of 2014, in one of the best battles in recent Richmond Raceway history, Joey Logano outdueled Brad Keselowski, Jeff Gordon, and Matt Kenseth for the victory.

MOMENT 61: In April of 2020, Richmond Raceway pivots to an all-digital race week including the eNASCAR Coca-Cola iRacing Series and NASCAR Pro Invitational, which William Byron won.

MOMENT 62: In September of 1964, Cotton Owens wants to teach his young driver, David Pearson a thing or two. So, he comes out of retirement to win at Richmond, beating runner-up Pearson by a lap.

MOMENT 64: In September of 1988, Harry Gant was victorious in the Commonwealth 200, christening the new 3/4-mile Richmond Raceway layout. He also won that weekend’s Cup Series race.

MOMENT 65: In September of 1961 and 1962, and again in April of 1963, future NASCAR Hall of Famer Joe Weatherly won three times at Richmond, a track he worked hard to promote and make better. 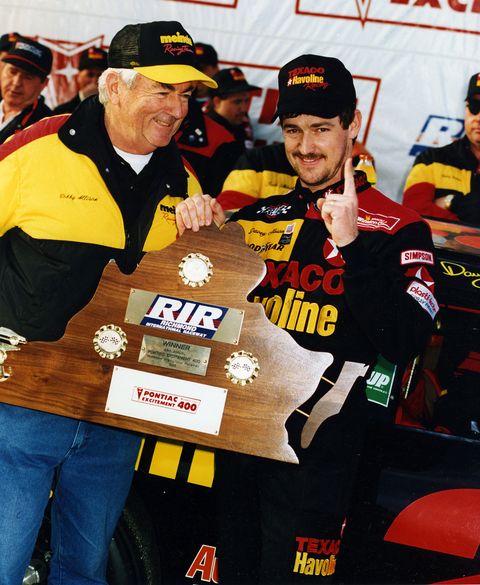 MOMENT 66: In March of 1993, fan favorite Davey Allison wins the final race of his NASCAR career before being tragically killed later that year.

MOMENT 67: In September of 2002 and 2003, Tony Stewart wins back-to-back Truck Series races at what he calls his favorite track.

MOMENT 68: In May of 2000 Dale Earnhardt Jr. passes Dale Earnhardt in waning laps and holds on for his second career Cup Series victory. They become the fourth father/son combo to win at Richmond, after Lee and Richard Petty, Richard and Kyle Petty, and Bobby and Davey Allison.

MOMENT 69: In June of 1997, Bob Keselowski secured the only Truck Series win of his career at Richmond Raceway.

MOMENT 70: In February of 1985, Dale Earnhardt begins his rivalry with Geoff Bodine by beating him for his first Richmond win.

MOMENT 71: Starting in September of 1959, Richmond Raceway has had two Cup races a year every year until 2020, when the pandemic canceled the spring race.

MOMENT 72: In April of 2012, Kyle Busch prevails over Dale Earnhardt Jr. by slightly more than a second.

MOMENT 73: In March and September of 1989, Rusty Wallace wins his first two Richmond races on the way to the 1989 Cup Series title.

MOMENT 74: In April of 2013, new tires allow Kevin Harvick to slice through traffic and win after Juan Pablo Montoya dominates.